Today’s flower is a delphinium 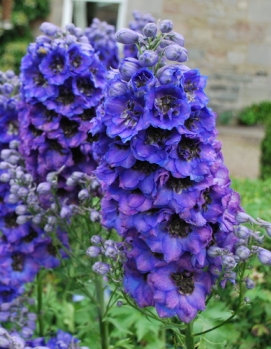 I went off to play golf today determined not to repeat the fiasco of last week where I played well during the first nine holes and very badly the second nine. All went to plan as I played well for the first nine holes but unfortunately I played even worse for the second nine holes this week than last week. This is not progressive and with the Langholm Open Seniors tournament looming next week, I fear public humiliation. However, playing golf regularly over the years should have inured me to that by now.

The only good thing was that we had played in the morning because the forecast had said it would rain in the early afternoon and it certainly did rain so however badly we played we were a great deal happier than we would have been if we had played badly and got very wet. Mrs Tootlepedal went to Hoddam to help with the driving for the disabled and got very wet. On top of that the chain came off the bike she was riding so she didn’t have the best of afternoons but all was not lost as she went to Gretna on her way home and purchased some  shiny new teaspoons.

In the evening the recorder players came to play and we enjoyed a selection of early music quartets in front of the first open fire of the season. We particularly enjoyed three pieces by Thomas Morley.

In the archive group we having been saying for ages, in the way that one does, that we must get some of the old people in the town recorded so that the social history of the town is not lost. Until now we have been saying that a lot but doing nothing. Today however two of our members went and interviewed a local centenarian and this is now preserved for posterity. They enjoyed doing it so much that they have made a list of other townspeople to record so I think we can safely say that at last we are suiting our actions to our words.

On the wormery front, baby worms have been spotted which is an encouraging development. Mrs Tootlepedal thinks that I’ve got the compost too wet and she may be right. Time will tell.

2 thoughts on “Another golfing tragedy”