Today’s picture was sent to me by my sister Mary. It is of Kenwood in the early morning yesterday. If any other reader of the blog has an interesting photo that they think will enhance a post, please send it on.

It was a cold, misty morning and I was well wrapped up for the morning ride with Dropscone. The hip was improved and so was our time in the light winds and even better was another late purchased perishable in the form of a lemony fruit loaf which went down very well with the coffee.

More or less as soon as we had finished cycling, the weather took a turn for the better and the rest of the day was lovely. Although I managed to complete the spiking and sanding of one lawn in the afternoon, most of the day was spent quietly, resting the hip and so there was quite a lot of peering through the camera lens. The feeders have been very busy as you can see.

The goldfinches, repenting of yesterday’s disloyalty, returned in force today and at times there were three on the feeding tree at once, though I only managed to catch two in this shot.

The book says that the male and female goldfinch look alike but I felt that this one had a ladylike air about it and the better weather enabled me to get a sharper picture which was very satisfying.

We have been visited by a robin lately but it doesn’t come to the feeder so I was pleased to catch this fleeting glimpse of him before he flew away.

Mrs Tootlepedal went out to work again today and when she returned she took some oats which she had harvested from under the feeders where the birds discard them and winnowed the chaff from the seed by this time honoured method. She is hoping to make a little porridge with the oats she has harvested and a ceremonial drop scone or two with the wheat to go with the morning coffee. We are grinding the corn with an old hand driven coffee grinder and I eat the bran with my bedtime cereal.

The shock to the system was that after many years of playing recorder on Wednesday nights, today I went to Carlisle to play on a Tuesday. We managed very well and we are pleased that Sue, our group member, has got into the choir at Brampton. She has been thinking of joining for ages, she says, and now she has finally done it. By coincidence, Susan who usually comes with me to Carlisle had to work late (again) and wasn’t able to enjoy this novel experience. I hope she will be able to come next week.

Finally, it was such a lovely day last night that the insects came out in force and I took a picture that gives a slight impression of just how many there were around the house by the early evening. 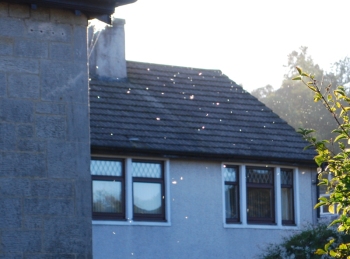 2 thoughts on “Shock to system”