Today’s picture is the sitting room, nicely painted by Mrs Tootlepedal. We await a carpet now. 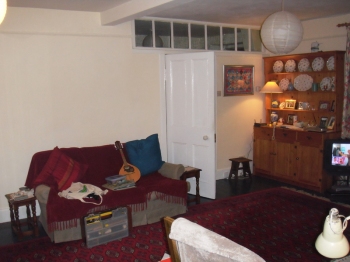 It looks very roomy with the bookcases out but when the carpet is out down, the book cases will have to come back as there is nowhere else to put them.

I had thought that I was going to Carlisle to see the eye department at the Carlisle Infirmary but that turned out to be next week so I went out on the morning run with Dropscone instead. His chest is not as well as it should be so we pottered round but were rewarded by a packet or two of so called angel slices with our cup of coffee. These were a triumph of Dropscone’s purchasing skills, having been reduced from £1.59 to 25p.

When we got back from the ride, Mrs Tootlepedal reminded me that I was giving a talk at lunchtime at the Buccleuch Centre. Someone had rung her up to see if she was coming to the lunch and it was lucky that they did because being in the wrong week as it were, I had forgotten all about it. Fortunately everything was ready for the talk and it went well. It was a repeat of a talk with slides of Langholm from the Archive collection which I had given to the Walking Festival visitors in June so it was no great hardship to give it again and some of the pictures were new even to people who had lived in Langholm all their lives.

In the evening, I went with Dropscone’s daughter Susan to Carlisle for recorders. One of our members was not there because she too was delivering a talk. She had achieved fame by being featured (on the left)  in this fine picture in the Cumberland News last week. 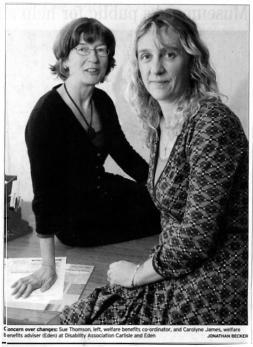 She is a welfare benefits co-ordinator for a local specialist support agency and the reason for her appearance in the paper was that her agency is so busy that they for the first time are having to turn clients away. This is because of changes to the Employment Support Allowance.  This is bad news because if they are having to turn people away now, what is it going to be like when the cuts really start to bite. This is part of the government’s wizard wheeze of getting all those shirkers off disability benefits and into non existent jobs. It is left to people like Sue to try to pick up the pieces in an ever more intolerable situation. She is a hero.

Anyway, even without Sue, the playing was most enjoyable tonight with a rich variety of early music. Drposcone’s daughter, Susan, is off to Abu Dhabi for a week to watch the Grand Prix so we shall be without her for the next fortnight.

On a happy note, the worms in the wormery seem to have survived the recent cold snap.