Today’s picture is of a very rare bird indeed, my sister Susan in New Zealand 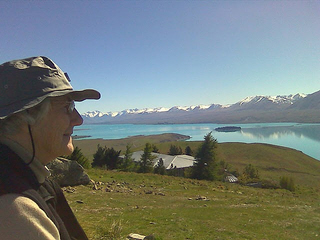 I have received an album of 100 photographs  from my brother in  New Zealand, where my sister and a friend are visiting him. I have taken this one out. There is another in the gallery at the bottom of this page.

The day began with Dropscone turning up for the morning ride for the first time since last Monday. A combination of things to do and bad weather have caused the gap in our normal schedule. I was still in my dressing gown but I got into gear as quickly as I could.  Today was cold (4º) but very still and as there had been no morning frost, it was safe to go out. We got round the normal route in a reasonable time and enjoyed a cup of coffee or two after the ride.

The waxwings were back again and must like this part of town as a neighbour sent me some photos of them in his garden and I heard a report that they are to be seen in a big tree outside the Buccleuch Centre as well.

As well as the waxwings, the siskins were back in force today. There was also a greenfinch, which was probably what the mystery bird in the walnut tree yesterday was. I spent a good deal of time trying to get good pictures of the newcomers with variable success and I have put some of the results in a gallery below. 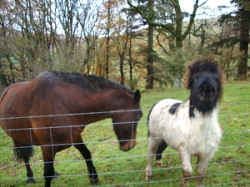 Mrs Tootlepedal went off for another walk today, this time round Potholm which is over 4 miles. She met these ponies at the  North Lodge. She told me that she had seen a crow perched on a sheep’s head at one stage of her journey. She got her camera out to shoot this strange scene and of course as soon as she did this, the crow flew off. I know the feeling.

While she was out, I updated the Moorland Education Project’s website with the news that they have won an award. This was very pleasing as Cat Barlow, the project officer, has worked very hard and deserves a pat on the back.

I also put in a week of the E&L index, which this time had rather few entries so that didn’t take me very long. I am off this evening to play recorders in Carlisle but not with Susan (Dropscone’s daughter) as she is still in Abu Dhabi on her Grand Prix holiday.

2 thoughts on “Back to normal”