Today’s picture, taken by Dropscone, shows me practising my putting before playing nine holes of golf this afternoon. 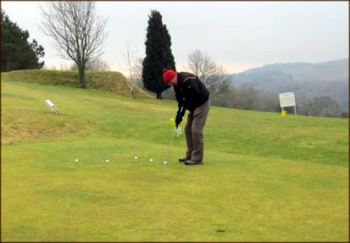 The day started with a bonus as Chuck Muir joined Dropscone and me  for our morning ride. It was still pretty cool but there was no danger of meeting black ice so we wrapped up well and went round the morning run the right way. In spite of apparently zooming along at a good speed, we still took rather longer than I expected to do the trip. This is probably down to having to wear so many layers of clothing, the chilly wind and the long winter lay off. Or it might just be old age catching up with us.

After a cup of coffee and a slice of walnut cake, I said goodbye to the cyclists and went to help Mrs Tootlepedal dismantle two beds which we are giving to our daughter. They are being taken to London as a part load by a removal firm from Dumfries.

The removal men were scheduled to come in the early afternoon but in fact arrived in the early evening. Their van was so big that they couldn’t bring it up Wauchope Street and they had to carry the beds and bedding down into Henry Street. The van was certainly big enough to take our beds as you can see from the picture of the last bed frame being put in the side door of what used to be called a pantechnicon.

We shall wait with interest to see if it does make it down to London.

I had missed playing golf at the weekend because of the freezing conditions so I decided to go up and play nine holes in the afternoon. The wind had got up quite a bit from the morning but the course was very playable and I enjoyed myself a lot. Dropscone had brought his camera with him so that admirers of great golf swings can look at our efforts and be amazed.

I played with Dropscone and Jim Murray who had both played in the winter competition on Saturday and Sunday so you can see that what they like doing is playing golf.

When we were young we used to see three or fourballs of gentlemen of great vintage playing golf in the afternoons and wonder at the fact the people so old could still play. Now we are those people.

My back has been rather sore of late so I thought there was little point in trying to protect it as I usually do and I gave the ball several hearty swipes with gratifying results.  However, as I was only playing nine holes, it is difficult to say whether I could adopt this policy over eighteen holes without doing some serious damage.

In the morning I had had a little time to look at the birds and I noticed that the siskins had come back in force.

And when I looked down, there were more in this one little patch on the ground than I had counted in the whole garden yesterday for the garden bird count. What were they up to then? 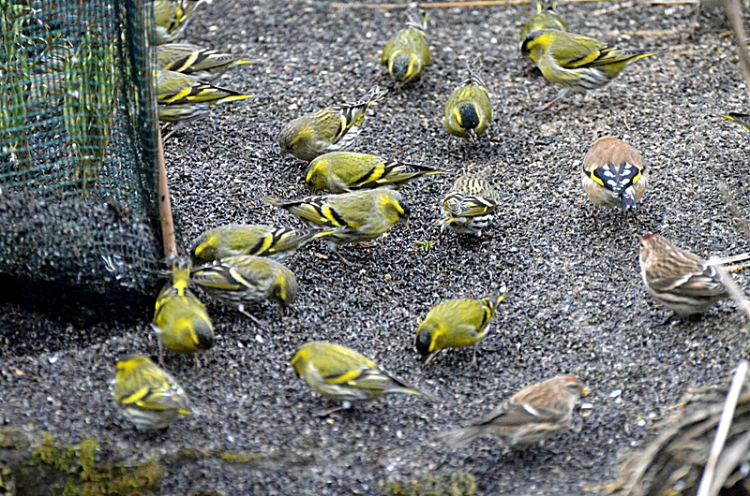 There are two redpolls on the right and a goldfinch with its back to the camera.

I paid the bill for the service and MOT for the car today and I have worked out that it costs £16 a week just to put the car on the road before you even start driving it. Add 10p mile for petrol on top of that and it looks like an expensive luxury but it is hard to imagine life without it round here so Mrs Tootlepedal is just going to have to eat less.

In the evening, I went to the bowling club and enjoyed a fine session of slot car racing with Grant. On my return I put a week of the E&L into the database so as not entirely to waste the day on pleasure.

3 thoughts on “A day of action”