Today’s picture is of a drumstick primula which I first photographed a week or so ago and which is now almost fully out.

It was pleasantly warm for April this morning and as there was only a light drizzle, Dropscone and I set out for the morning run in good heart. I had the slow bike out as Dropscone had called for a slow pedal but things don’t always go to plan and we fairly whizzed round by slow bike standards. Strangely, Dropscone managed to keep his pulse at a steady rate even though I was seriously puffed out on the uphill sections. The after-biking coffee was accompanied by a slice or two of the cake specially made for the B &B guests so we were very honoured.

Mrs Tootlepedal had been struck by yesterday’s picture of a chaffinch among the plum blossom and directed me to get a shot of a goldfinch in the tree today. Unfortunately, birds don’t always do what you want so she will have to make do with this greenfinch.

I will watch out for a goldfinch tomorrow. After coffee, I went up to the Health centre for my three monthly vitamin B12 injection so I am now officially full of beans.

We had a quiet bird day today but with a good selection of visitors, siskins, blue tits, goldfinches, greenfinches, sparrows, dunnocks, blackbirds, starlings and jackdaws. 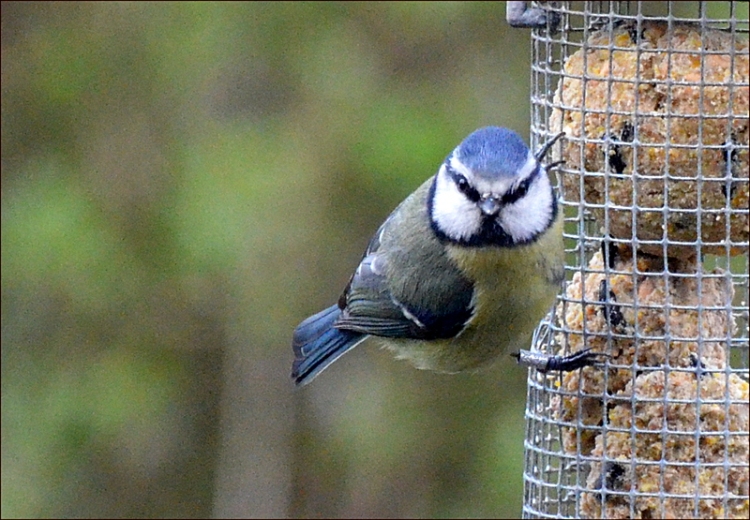 This blue tit has been ringed as you can see. I am trying to get my sparrow identification skills honed and I think this is a female house sparrow. 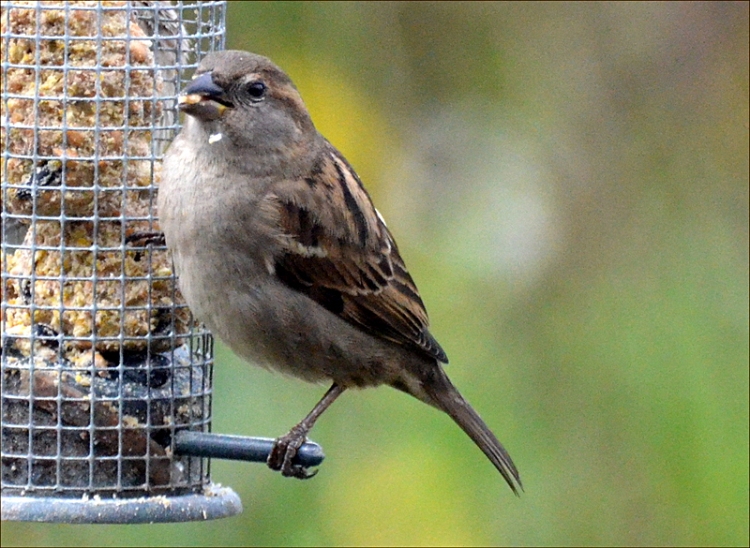 It was joined shortly after by this very bedraggled specimen.

I think that, like Bluebottle, it must have fallen in the water.

I had soup and cheese for lunch (I am working my way through my cheese mountain, I had a  cheese omelette for my tea) and then went to do some more work on the Prehistoric Trail website. Mrs Tootlepedal went out into the garden to  do some tidying up of a very strenuous sort and, after a while, I went out to supervise. We saw this blackbird grubbing for worms under the espalier apple tree.

It is a fearless bird and appeared later on waving to the crowds from the wheelbarrow.

I am a great lover of soft fruit and I am very excited by the early progress of the blackcurrants and gooseberry. If we can avoid any damaging frosts, it promises to be a bumper year. I am really pleased by the number of pollinating  insects about. I had an excellent picture of a bumble bee on the blackcurrant bush but I inadvertently deleted it  so you will have to take my word for that.

I took this picture of the strikingly upward pointing shoots on a cotoneaster while I was hovering round the blackcurrant so it will have to do instead.

The great tulip outburst is still on hold but one or two fancy ones are out here and there. This one is unexpectedly nestling by the kitchen waste compost bin. I am still working on the best settings to capture vividly red  flowers.

While we were in the garden, we were visited by Dr Tinker, who was taking a therapeutic walk after his back operation in company with his grandson, and the day was so mild that we were able to sit out under the walnut tree for our tea and cake.

After this, I went back in and did more work on the website and I think that the end is now in sight. Of course that is subject to not having second thoughts about the whole look and feel of the site and starting again from scratch.

In the evening I went to the Archive Centre with Sandy (but not Jean who wasn’t feeling well) and got through a power of work. We were joined by Arthur Bell, who had come on from a Rotary meeting, and we all adjourned to the Douglas for a well earned drink. I am happy to report that by the time we left, the world was a great deal better place as we had well and truly put it to rights.