Today’s picture is a bumble bee on an iris. To me as a fruit lover, the bee is the most important worker in the garden. 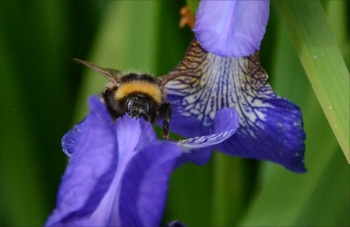 As the speedy bike was at the bike doctor’s, I said to Dropscone as we prepared for the morning pedal, “It”ll have to be a slow one today.” This was like a red rag to a bull and we belted round in the quickest time I have done on the slow bike. As the breathing seems to be very good at the moment, no harm was done. Except, that is, for a moment half way round when it became apparent that there was a big shower of rain passing across just in front of us. Because of the brisk breeze, a moment of slow pedalling would have left us dry but Dropscone was in fierce pedalling mode and we caught the tail end of the rain before it blew away. The stiff breeze had dried us out before we got home for our habitual girdle scones and coffee.

Mrs Tootlepedal was busy spreading the last of last year’s composted shreddings onto some flower beds and I took the 49 Heritage Trail DVDs that Jean had copied last night down to the Langholm Initiative office. When I got back I saw a flurry of action at the brid feeder.

The siskin was sufficiently resolute to discourage the greenfinch. I have yet to discover why some birds can put the wind up other birds. The greenfinches and siskins are the strongest willed when it comes to getting to and staying on the feeders and the siskins and blackbirds are the least frightened of human beings.

The succession of sunshine and showers we are going through at the moment is leaving the garden looking very fresh. I went out with the camera to see if I could get some good close ups.

Mrs Tootlepedal points out that when I put a photo of a willow on yesterday’s blog, saying there was more than just flowers in the garden, I had in fact put a picture of  willow flowers on without realising what they were. Ignorance is bliss. However I am pretty sure that this green collection below has no flowers in it today.

There are flowers of all sizes and colours in the garden at the moment but among the showy numbers, there lurk some tiny beauties.

After lunch, Mrs Tootlepdal took me out for another pedal. She chose the route and very strenuous it was. We went down the Penton road and had to climb a stiff hill past Broomholm. Then we promptly wasted all the height we had gained as we dropped into the Tarras valley and then had to climb out of that. I had the little camera with me and stopped and turned to take this picture from near the Mumbie.

We went through Claygate and dropped down to the Esk by way of the Fairy Loup track through the woods.

We followed the old A7 into Canonbie and then climbed out of the village past the Cross Keys hotel. At the crossroads with the Canonbie bypass, I stopped to admire this fine lilac.

We headed out on the road towards Glenzier and we soon passed this industrial site plonked in the middle of a field.

This is a gas well tapping into the methane gas of the large Canonbie coalfield that underlies the country from Canonbie to Longtown. I don’t know what stage of development the scheme has got to but I think this is a test well to see if it is worth going into large scale production. Arthur Scargill often called for the re-opening of the Canonbie colliery but I don’t know what he would make of this. I don’t think it will bring any significant local employment in the long term if it does work.

We joined the last half of the morning run after hitting the Annan road and rolled up to the top of the hill at the Kerr wood. I took this picture of the edge of the wood because it made me think of green fingers which was very appropriate as I was pedalling  along with Mrs greenfingers herself.

When we looked down into the Wauchope valley, we  were greeted by some terrifying black clouds.

The sun was catching the windmills and it made them stand out in front of the gloomy background.

We hoped to get back home before the heavens opened and fortunately the breeze was at our backs as our little legs fairly whisked round as we sped down the Wauchope road. Even in our hurry, I found time to pause for a moment to capture this buzzard which was ten yards away when I got the camera out but by the time I got my finger on the button, it was high in the sky.

We reached the house safely and watched as the clouds passed by without shedding a drop of rain on Langholm. I had time to wander round the garden before the next shower came later on.

I was back in the house when Mrs Tootlepedal called to say that we were being visited by a reed bunting. We had seen one out on the hill when we were cycling so it was good to see one in the garden where I could photograph it too. 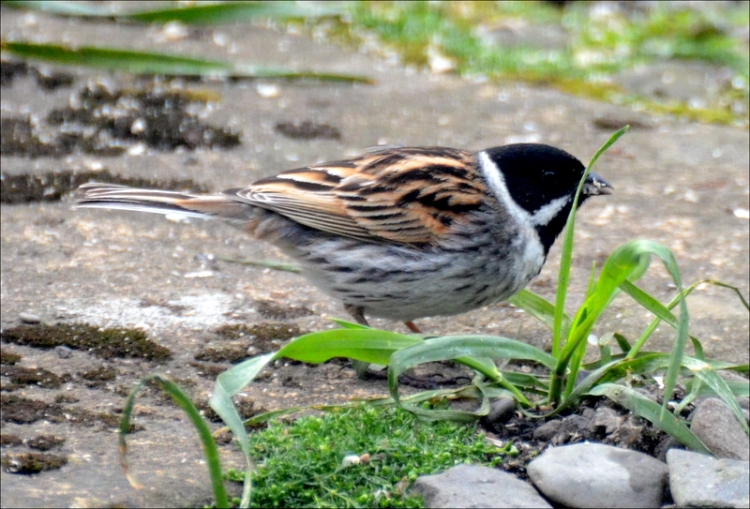 While I was out, I saw a few more flowers.

It was the election of the cornet in the evening and in traditional style, the Town Band marched down our street to go to the Hall and stopped playing just before it got to our gate. It has never once played past our gate in the 36 years we have lived here, not even when I was playing in the band.

We had a quiet evening in. Tomorrow we are going to see Attack the Block, a fine film.

To show that I am not bitter about the Town Band, here is a colourful corner dedicated to them.

It will be a lot more colourful in a day or two.

3 thoughts on “Breezing about”