Today’s picture, sent to me by my sister Susan, is of my new great nephew Jamie. Obviously the finest looking baby in the world.

It was a lovely morning and when we had said goodbye to our B & B guest, it was obviously the day for a pedal. Mrs Tootlepedal, however, had different ideas. There was work to be done in the garden. These are weeks of very hard work for the gardener and there was more tidying up and planting to be done. The first job was to finish the hedge clipping.

Our new hedge trimmer is making a good job of these in Mrs Tootlepedal’s hands. After the clipping of the hedges, comes the picking up of the clippings. This is tedious work. When the hedges were finished we set to work together to clip the pawn. We don’t like to get the top too perfectly symmetrical in case it looks boring. (Hmm.) 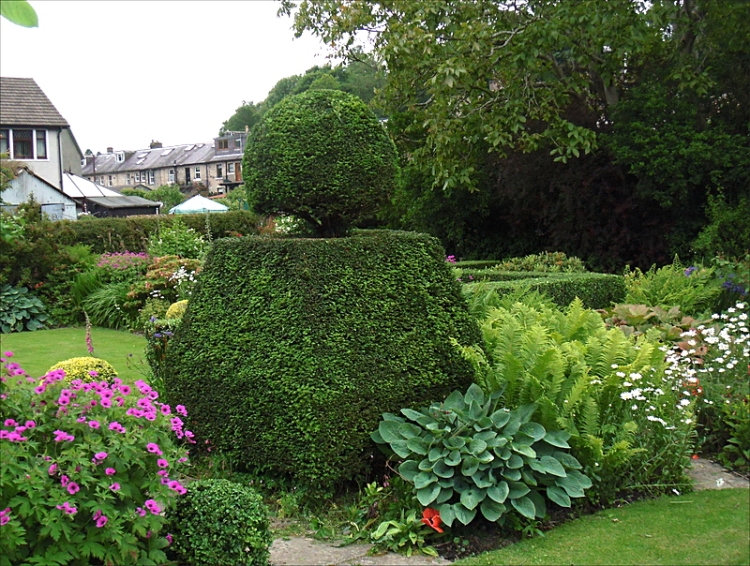 I took a bit of time out while Mrs Tootlepedal was slaving to take some pictures. There was a good deal of buzzing in the garden even when the hedge trimmer had stopped.

The garden work took up the morning and by the time we had finished, the sun had gone and the forecast was talking of rain by four o’clock. We decided to get the bikes out and go round the same fourteen mile run as we have done a couple of times recently. This would let us get in safely in the dry. I took the little camera with me to show some of the wayside sights which enliven the ride.

We noticed a lot of trees and hedges which look as though they have been burnt. An article in the paper recently said that many trees on the west coast have suffered badly from the cold winter followed by the severe gales. Experts are not expecting long term damage to have been caused. The damage is only visible on the windward side of the trees and hedges.

The camera makes the weather look better than it was. There were threatening clouds to the south. However, we had the wind behind us from this point so we were confident of outrunning the rain.

When they built the new road, they put a lot of care into the landscaping. They had to do this because of the danger of landslips. As well as numerous well built drains, they had a sort of water cannon which they used to spray the banks with a combination of grass, wild flowers and something for them to grow in. It has worked wonderfully well as you can see here and the whole section is clothed in daises at present.

When we got back, I finished off the tidying activity by mowing the grass round the greenhouse and on the drying green. We then enjoyed a cup of tea and a good sit down. Over the past couple of days we have both done a lot of work in our different ways.

The rain came down as forecast (a hard rain’s a-gonna fall)  but it did not discourage the birds from their feeding.

I counted over twenty birds – sparrows, goldfinches, chaffinches, greenfinches, siskins and even a pigeon – clustered round the feeder, either waiting their turn or picking up scraps underneath.

The rest of the evening was frittered away watching the Canadian F1 stop and start over what seemed like a lifetime before it finally finished with a burst of excitement.

In spite of the late rain, it was a pleasant day today, largely because it was a few degrees warmer than recent days and more like what a June day should be. The forecast speaks of warmer days ahead. I am thinking of getting the shorts out again.

7 thoughts on “Only a pawn in the garden”