Today’s picture shows a vase which toppled and broke in my brother’s house in Wellington, New Zealand during an earthquake.  It was quite a mild earthquake and they happen often over there but since the events in Canterbury, he tells me that he has got more nervous about them.  Who can blame him. 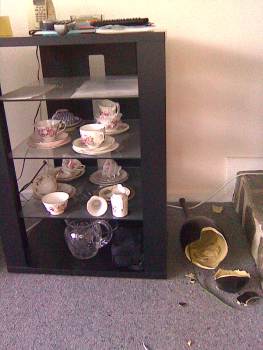 We were much more stable here and the weather looked quite promising in the morning.  On going outside though, it became clear that it was pretty cold in the sunshine and still quite windy.  I made a visit to our producers’ market and made my customary purchases of soap, fish, venison and cheese and added some very reasonable priced parsnips to my shopping bag.

When I came back from the market, I was pleased to see a handsome great tit on a feeder.  We haven’t seen one for a bit and I was worried that some other garden delicacies had tempted them away from us.

And a few minutes later, the same bird, or perhaps another, was at the other feeder.

On the plum tree feeder, there was a congregation of various finches, green gold and chaff.

There were no bramblings or tree sparrows to be seen so I went up to the Moorland Feeding station to fill up the feeders there.  I had hoped for some excitement with the start of the chillier weather.  Disappointingly, there were not many birds about at all.  The ones that were about were familiar friends.

I don’t tend to look closely at pheasants as they are so common round us.  They are bred in poultry houses for shooting parties to take pot shots at and they are so tame that they tend to get run over by motorists a lot when they are first put out into the woods.  This is not the drivers’ fault as the birds hurl themselves in front of passing cars.  When you look at them though, they are really very exotic things indeed.

They are more like a work of art than a shotgun target.

It was very cold and windy and there were no woodpeckers to be seen so I filled up the feeders and came home for lunch.

On our own feeders, I watched this goldfinch actively puffing itself up.

I thought it was because of the cold but as it turned out, I think it was to make itself look fiercer because it wouldn’t let another goldfinch come onto the feeder which is not normal.  Usually they are happy to share with other nibblers.

Although it was cold and windy, I thought the sunshine made a short cycle trip probably worthwhile but every time I was about to put the cycling gear on, the clouds came and rain threatened.  The trouble about cold, wet weather cycling is that you have to spend a good deal of time putting on the many layers that make it possible.  It is therefore remarkably easy to be put off having to go through all that palaver and I was put off.  I was secretly quite glad to be such a wimp because it got colder and windier and wetter as the afternoon went on and even well wrapped up, I wouldn’t have enjoyed an outing much.  I have done quite a lot of cycling this year and I want it to keep on being a pleasure not a obsessional drag.

A house sparrow looked as though he thought much the same about the chilly wind as I did. 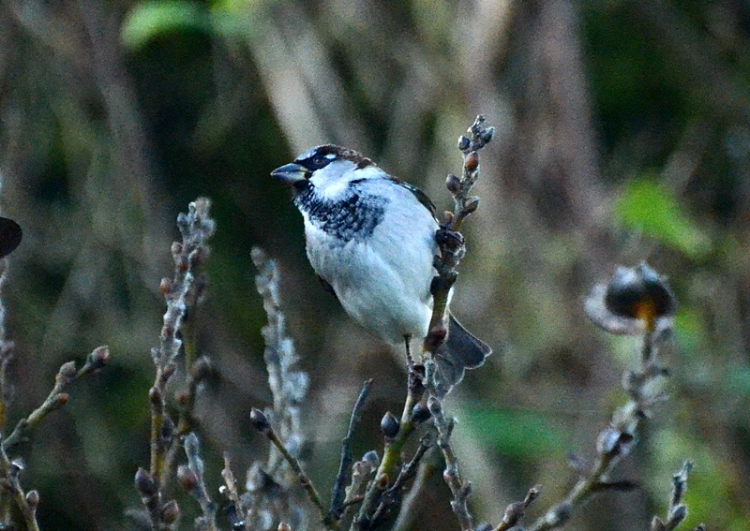 Mrs Tootlepedal had arranged to sing with a small choir as part of the festive activities surrounding the turning on of the Christmas Lights in the High Street so she wrapped up well and headed off for a practice.  I thought that I should offer her moral support and so I put on two coats, a silly hat and a pair of stout gloves and went up to listen.

Mrs Tootlepedal is in the striking pink coat in the middle of the front row. Between performances, I went in to the Library Gallery to have a look at the Art Club exhibition. Our local artists paint to a very high standard and being suitably old fashioned round here, we don’t have to put up with any conceptual art which is a relief.

I went out to hear the singing again.  This time they were singing with the Langholm Town Band and it would have helped if they had know what they were going to sing but they carolled away valiantly regardless.

The powers that be have recently cleaned up our town hall facade and as part of the work, they cleaned the clock faces too and I thought the clock looked very good in the gloaming. 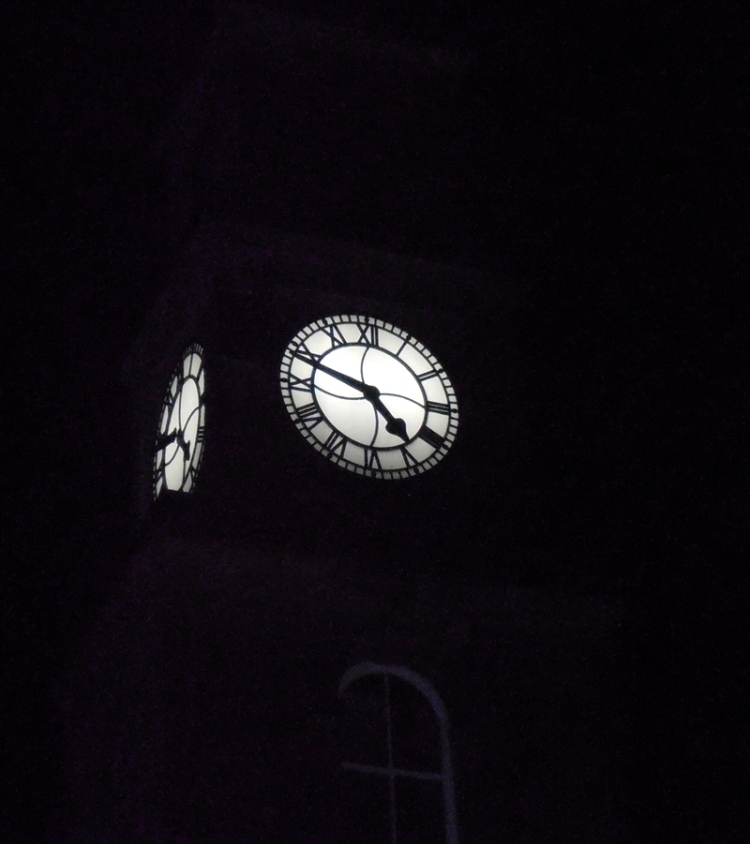 As the clock showed that there was still quite a wait for the lights to be switched on, I beat a discreet retreat and went home for a slice of toast and a cup of tea.  Mrs Tootlepedal’s hands were like lumps of ice when she eventually returned even though she had been wearing gloves.

I cooked the fish that I had bought earlier for my tea and then settled down to a cosy night in front of the fire.

13 thoughts on “Singing in the rain”