Today’s picture is a shot taken by my recorder playing friend Susan on one of trips last year to Edinburgh.  I thought it was classy enough to put it in larger than usual. 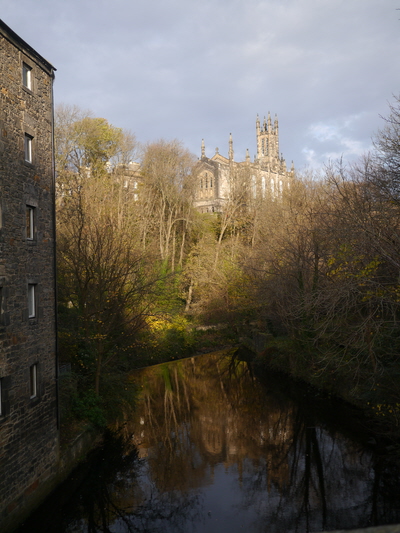 I had given the cycling a miss as I had to visit the doctor later in the morning and I thought that perhaps doing twenty miles before going to complain about aches and pains wasn’t the best policy. Instead, I answered a call from Dr Barlow to go up to refill the feeders at the moorland feeder station.

The weather was reasonable so I took the camera up with me in the hope of seeing a woodpecker or two.  I filled the seed feeders and took a moment to hide with the camera.  In less than a minute, the feeders were being well used.

It was good to see many tits about as there are so few in our own garden.  Someone had put both the peanut feeders on the left side of the station so it was hard to get a good shot of a woodpecker when one appeared.

I came out of hiding and filled the peanut feeders and shifted one of them back to the right side.  I didn’t expect a woodpecker to come to it in its new position for some time but once I had gone back behind the screen, one appeared quite quickly. 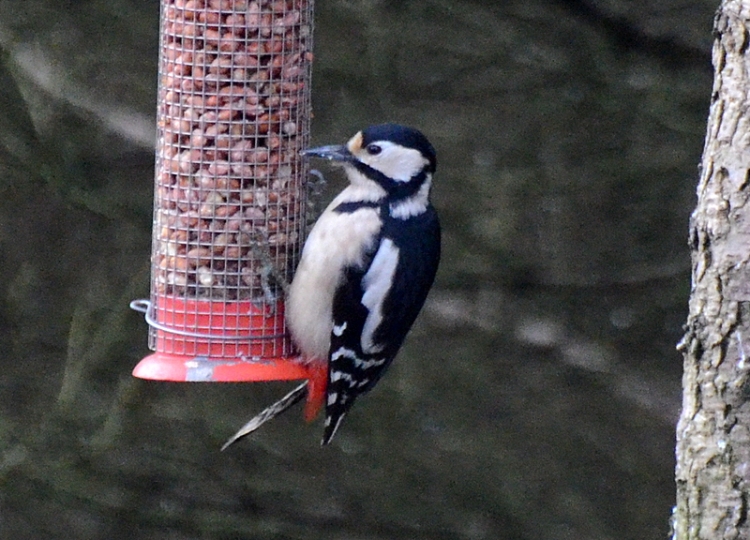 On the seed feeder nearest to the hide, a siskin glowed in the morning  light.

I was just about to pack up and go when I saw some movement on the peanut feeder which was close to the screen.

This is undoubtedly the closest I have ever been to one.  It didn’t stop long as I clicked away and after ensuring that I had caught its best side, it went off to sample the fat balls.

I took the opportunity to capture the Georgian (the country not the era) splendour of a pheasant before driving home.

Once home, there was a moment to catch a goldfinch in flight…

…and then it was time for coffee and fortunately Dropscone appeared with some of the girdle scones which enhance the coffee experience.

By this time the weather had got rather cloudy and gloomy again and flying bid shots were not on the menu.  I had to make do with a visiting starling showing an unexpectedly decorative feather formation…

…,and a greenfinch daring any siskin to give it cheek.

Then it was time to smarten up and go to see the doc.  She was very sympathetic and has organised a chest x-ray for me next week to see if I have any lingering chest problems and she was as keen as I am to see what the hospital rheumatologist will say when I see him on Monday.  She was secretly pleased to find that my swollen hand has not improved much as it is always galling for a doctor to refer to a specialist a patient who turns out to be cured before he gets there.  A few obvious symptoms always help.

I idled away the afternoon, sporadically looking for frogs in the pond (hardly any since the frosts earlier this week) and the source of some very strident bird calls outside the front door.

I am always very impressed by the way that birds can stand on a power line with no ill effect.

Mrs Tootlepedal was unimpressed by gardening in the damp, gloomy, windy conditions and retired upstairs to commune with her new sewing machine.

With this rather fine result…

She told me that she happened to have some bits of material about so she thought she ought to do something with them.  I don’t think it is entirely haphazard though because the more you look at the work, the more different patterns you see.

In the evening, I went to the Archive Centre with Jean and Sandy and Jean and I put a week of the E and L into the index while Sandy slaved over scanning and organising even more photos for our collection.  We rewarded ourselves with some fermented liquid in the Douglas.