Today’s picture, sent by Dropscone who was golfing at Innerleithen, shows what I think is a common newt, though my guide to newts says that the common newt is far from common any more.

Because Dropscone was off golfing, I gave the morning ride a miss and devoted myself to useful tasks (after a leisurely breakfast of course).

I had a moment to notice a mixed foursome on the feeder before I set to work.

Then it was out with the hedge trimmer and off to the front hedge which was badly in need of a short back and sides.  Because of the aches and pains, this was a joint effort with Mrs Tootlepedal sharing the clipping and sweeping up.  We didn’t want to go for an over manicured look* but we were quite pleased with the improved neatness of the end result.

As I went back into the garden, I could hear a buzzing.  It was a very large bee on the pulmonaria.

After a cup of coffee, we then went out and shredded a huge mound of the clippings that have resulted from Mrs Tootlepedal’s spring cleaning in the back border.  These go into a compost bin and will reappear in the garden as mulch in a year’s time.  What with the need for occasional little sit downs for me, this took us until lunch time.

I did find a moment to notice a miniature tulip which has just burst into flame near the pond. 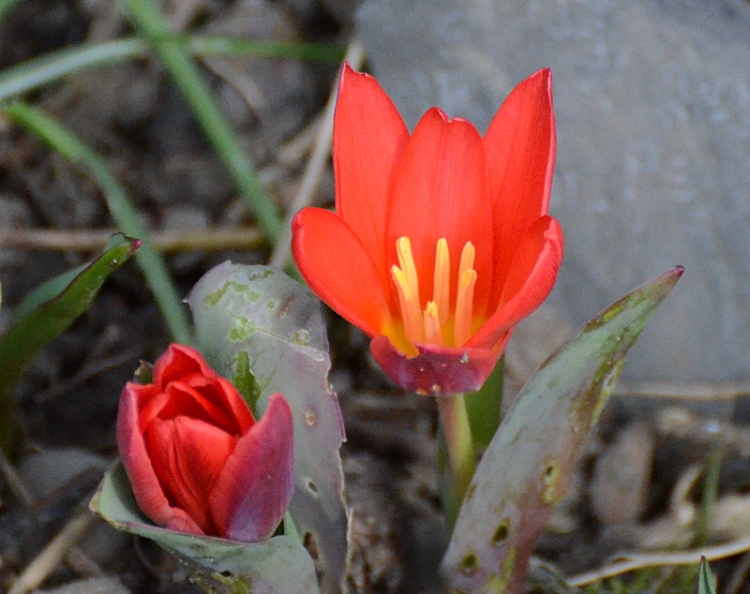 And a daffodil winked at me as I went past. 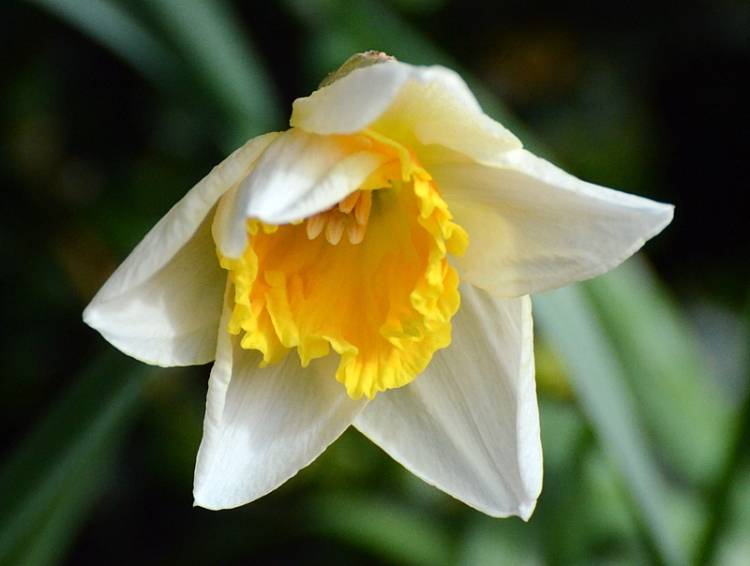 After lunch, we packed two bikes into the Kangoo and drove to Lockerbie, playing dodge the pothole as we went.  We passed a gang of men fixing the potholes on our way but there were plenty left.  There are those pure cyclists who disapprove of driving to cycle and I agree with them in general but we have very few choices of roads round us and most of them involve hills.  Mrs Tootlepedal cycles for pleasure not pain and likes to see new views from time to time so driving a short distance at least is inescapable.

We left Lockerbie on the bikes heading south and enjoyed a pleasant but slightly dull section down to Hoddam and the river Annan.  It was overcast and breezy and it felt quite cold considering that the temperature was high for the time of year.  After Hoddam, we turned across the grain of the country and headed along the undulating road to Dalton.

This section, with numerous little hills and a cross wind, was hard work but we were buoyed up by the anticipation of a cup of tea and a scone at the Dalton Art Cafe and pottery.  As I swept into the drive of the cafe,  a voice from under a car in their garage said, “You’re very hopeful.”  It was shut.  There was a notice to prove it.

So Mrs Tootlepedal and I shed a tear, nibbled on a Twix and cycled bravely on back to Lockerbie.  It was still very grey but we had the wind behind us and we were cycling on a road that was new to us so the miles slipped quickly by.  We were running along with the Annan river a field or so away.

We were in rich farming country and farmers were busy in the fields all around us as we pedalled by.

As we approached Lockerbie, I stopped to take this view up Annandale.

We were impressed by the neatness of this farmer’s duckpond with matching ducks.

We made it back to Lockerbie without incident although the breeze and the undulating roads meant that our average was nothing to write home about.  We needed refreshment so we searched Lockerbie High Street until we found a fine cafe which sold toasted tea cakes…

Somewhat annoyingly, as we drove home we came out from under the cloud into a brilliantly sunny evening.  Still, it made the drive home a great pleasure.

We just had time to get changed and have our tea before we went out to sing with the new community choir.  Numbers were a bit short as the operatic society is doing its annual show next week and so people were busy but we had two hours of fun and walked home admiring the brilliance of the planet Jupiter.  I took a feeble picture just to record that it had been so bright.

It has been very nice to spend such a co-operative day with Mrs Tootlepedal.  It is not often that our interests coincide so exactly.

As you can see, there was not much space today for bird pictures and the best I could do in the time is a rather spotty picture of a brambling standing in as today’s chaffinch.

*a well manicured hedge look requires a good deal more time and care than we had available.