Today’s picture shows Dropscone’s brother-in-law bravely suffering the hard life which you have to put up with when you retire.  He’s baby sitting in Switzerland.

It was a fine, dry, almost windless morning today which made the fact that I wasn’t fit enough to pedal all the more hard to bear.  An added annoyance was that I might have been fitter to pedal by lunchtime but the weather was due to go off by then. As a result, I sent the morning doing crosswords, making coffee and mooching about in a what can only be described as a marked manner.  Mind you, I did perk myself up enough to cast the occasional glance out of the window where the birds were offering a complete non-stop entertainment package so I wasn’t so badly off.

It was all action out there. 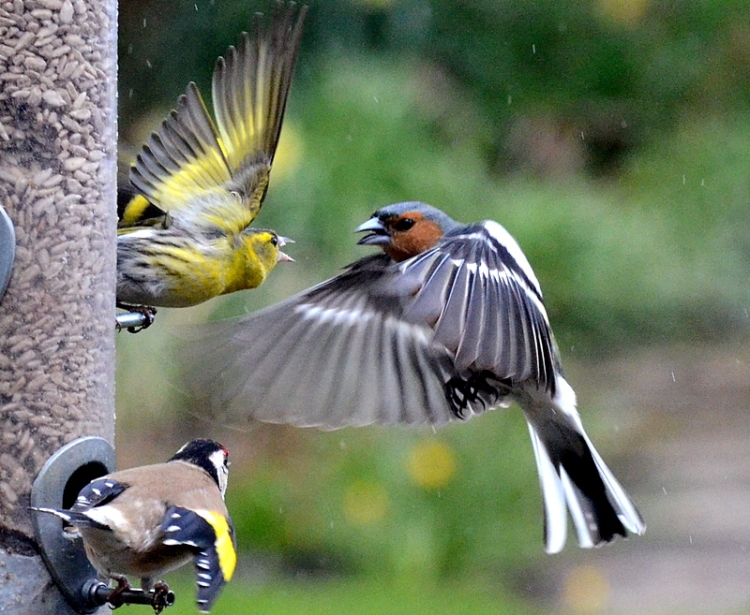 The was even a bird sandwich.

Several birds auditioned for the part of chaffinch of the day without success.

I wandered out into the garden to see how the tulips were getting on.

Mrs Tootlepedal has some fairly fancy tulips in among the more ordinary types.

The standard tulips are among my favourite flowers.

Other flowers were also available.

I even found the time and energy to sieve a bucket of compost so life wasn’t too bad at all.

On the bird front, there were two visitors which I haven’t snapped for a while.  There was a lone brambling, the first we have seen for some time…

…and the sparrowhawk, which is a frequent visitor but which doesn’t often linger this long. 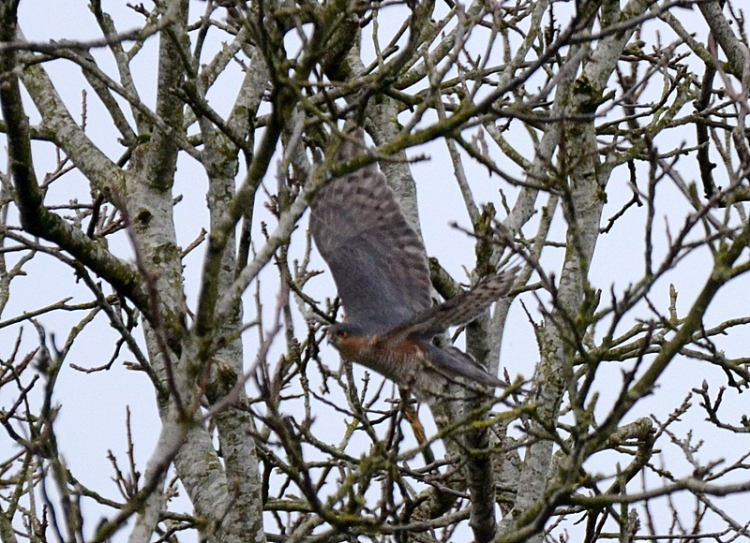 Oh and there was one more interesting old bird too.  Regular reader Ming gave us a smile and a wave as she passed by in the afternoon.

All in all, it turned out to be quite a good day in spite of the lack of pedalling.  After lunch, I spent some time wondering whether the weather would let me out for a short walk and wondering where I would go if it did and I was still procrastinating and changing my mind from moment to moment when Mike Tinker turned up and swept me off for a walk down to Skippers Bridge and back.

A bit further down the river we met two goosanders having a rest on the far bank.

I took a picture at Skippers Bridge to show the river there in early spring.  You can see dark clouds gathering in the background which made me glad that I was carrying an umbrella.

Mike is a great naturalist and pointed out many interesting plants to me as we went along.  I took this picture of some handsome wood anenomes…

…but many of the others, including some early bluebells were less photogenic.

When we got home, I was quite tired after walking two miles and I was grateful to be sitting down to a cup of tea when I was witness to a most unusual drama.  I took too many pictures of it and although I have filtered them down a lot,  there is still quite a pile left so for those of an impatient disposition, this is the time to say goodnight.

The drama had a quiet start…

(Pause for a slight break in the narrative here as an elderly photographer scampers painfully up stairs and opens the bedroom window as quietly as possible.)

…but it just walked onto the paving stones and bashed the poor frog about a lot.  Then it picked it up again and looked about.

Several of the more sensitive pictures in this sequence have been censored either on grounds of taste or because I missed them.

Having had its tea, the heron paused for a moment…

..and then flew lazily away.

That was most exciting and it was all thanks to Mike that we were having a cup of tea at just that time and as a result,  Mrs Tootlepedal wasn’t in the garden and I was sitting at the table looking out of the window.

What with the ducks eating the tadpoles and the heron eating the frogs, our pond will soon be a desert.

In the evening we went along to the Buccleuch Centre with our new choir and sang a song to some delegates at a meeting.  They were as surprised as we were, considering that we have only had four meetings ever but it went not too badly and we even sang in two parts from time to time. After that we went back to the Sports Centre and had our usual practice which I enjoyed a lot, although still not feeling at my best.

It will not surprise those of you who have read this far to find that the chaffinch of the day is a heron.

35 thoughts on “A frog in the throat”