Today’s picture of unusual multi-story car parking is another from Dropscone’s  sister who is visiting in Switzerland. 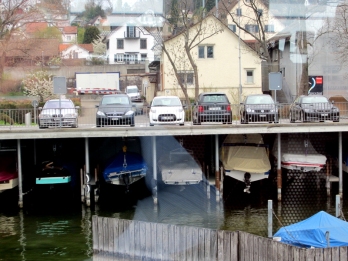 It was a wonderfully bright and sunny morning and I got up fully dressed and ready to go for a pedal and this enthusiasm lasted until I poked my nose out of the door and had it bitten off by a strong and very nippy north wind.  I kept the cycling gear on as I ate my porridge  but by the time that the porridge had gone down so had my keenness for cycling and I trudged back upstairs and took the cycling gear off again.

Mrs Tootlepedal went out for a full day’s workshop with the Embroiderers’ Guild and I was just settling down for some hard armchair jockeying when my day was brightened by a visit from Bruce with his dog Guthrie.  We had a cup of rather too strong coffee and after he left I did a crossword and then gathering my strength, I picked up my new lens and attached the camera to it.

It is so heavy that I had to get my tripod out too.  These are the results of my first experiments with it.

Of course it is no faster than my usual lens and has a smaller aperture than it so it won’t automatically give me sharper pictures of moving things. If the bird will stay still, it should give me a good result. 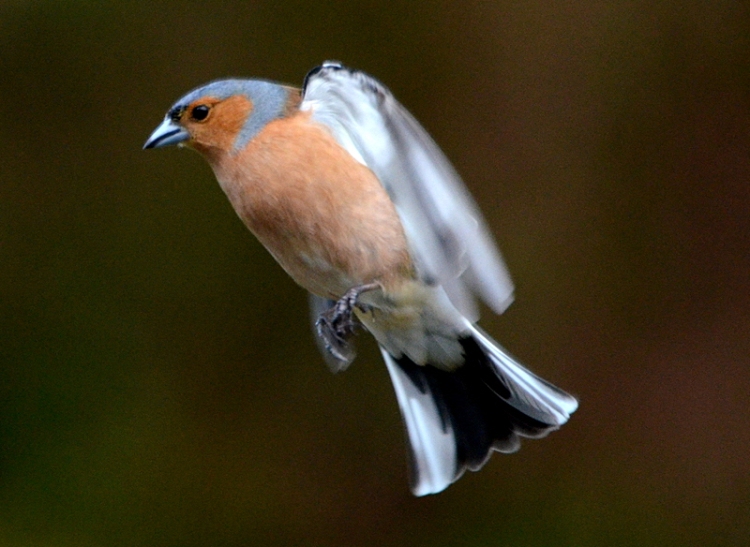 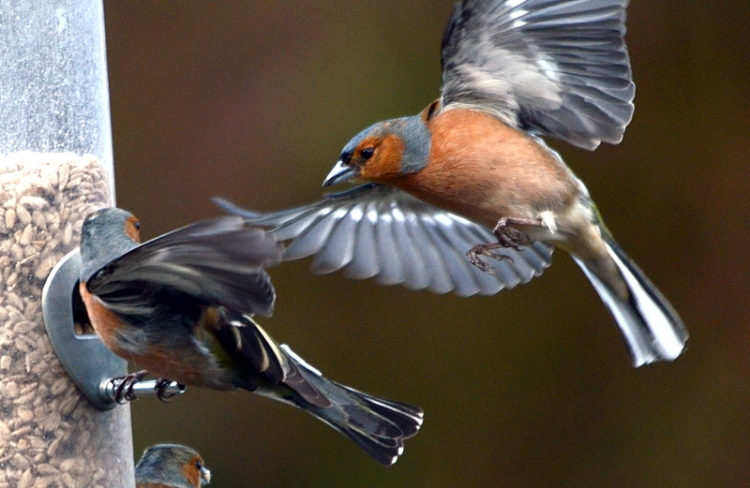 Here’s a comparison with my old lens on the left and the new one on the right.

What do you mean? Of course there’s a difference.  Isn’t there?

I took my old lens out into the garden to look at tulips.  They are coming out mob handed now.

The flowering currant is at its best. 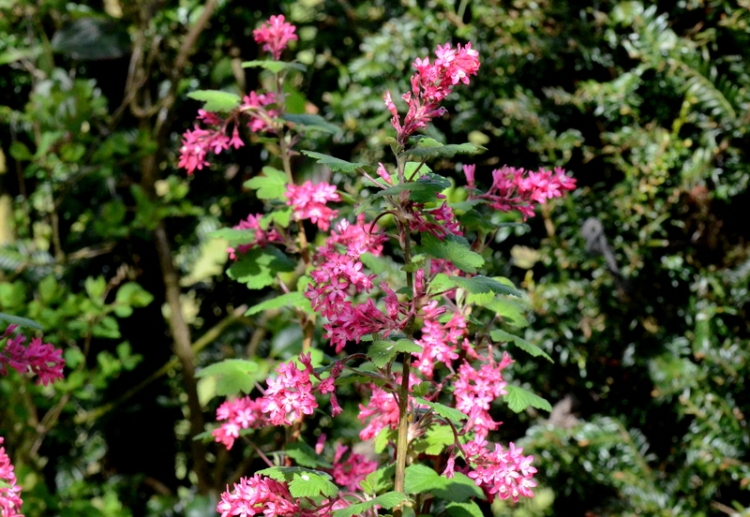 After lunch I put the new gear into the car and drove up to the moorland feeder station to see if the new lens could spot a woodpecker. Using it is a different experience.  Instead of just carrying a camera around and snapping anything that moves, which is my normal practice, this set up is so ponderous that you have to decide what you are going to photograph before it arrives and hope that it actually turns up.  A great tit arrived on the selected feeder first. 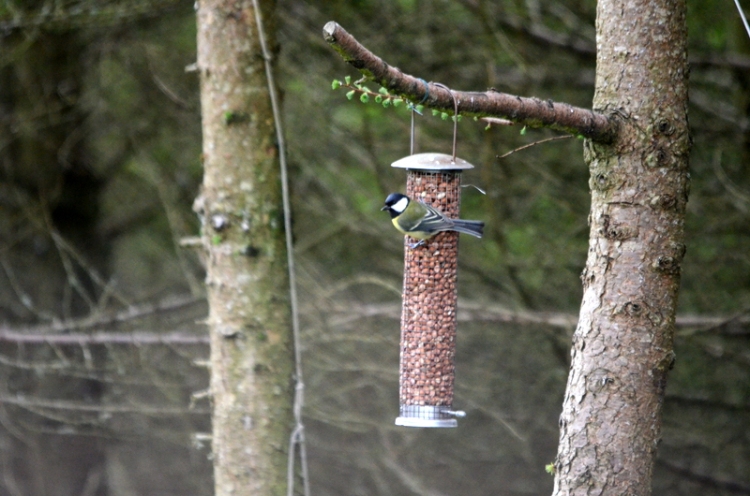 Then the pheasants started a huge commotion right in front of me. This was not unconnected with sex and I was able to adjust the camera to capture this well satisfied cock pheasant who ruled the roost in no uncertain fashion.

Finally a woodpecker arrived at the right spot.  By this time it had got rather gloomy and I had had to sit through a short hailstorm but there was still enough light to get  half decent shot. 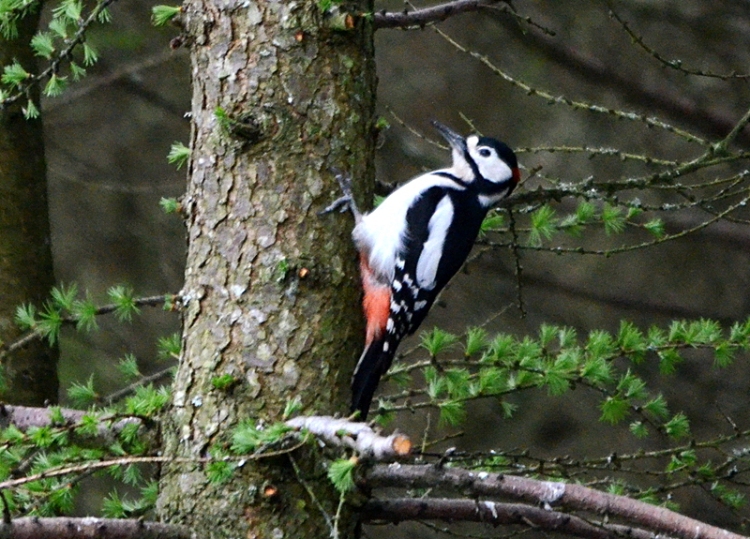 I need to get used to using ‘mirror up’ mode and get a remote shutter control as well because the large lens magnifies the slightest wobble of the camera as well as the subject of the shot.  Still, I was pleased with these first efforts because it showed what I should be able to do with some practice.  Once again, I think the longer lens lets me have a better background than I could get with my old lens.

On my way home, I stopped at the Kilngreen and took out my old lens just so that it wouldn’t feel neglected and went to look for a dipper again.  A goosander was floating quietly under the Sawmill Bridge and waited patiently until I had got into a good shooting position before flying away contemptuously as soon as I raised the camera. 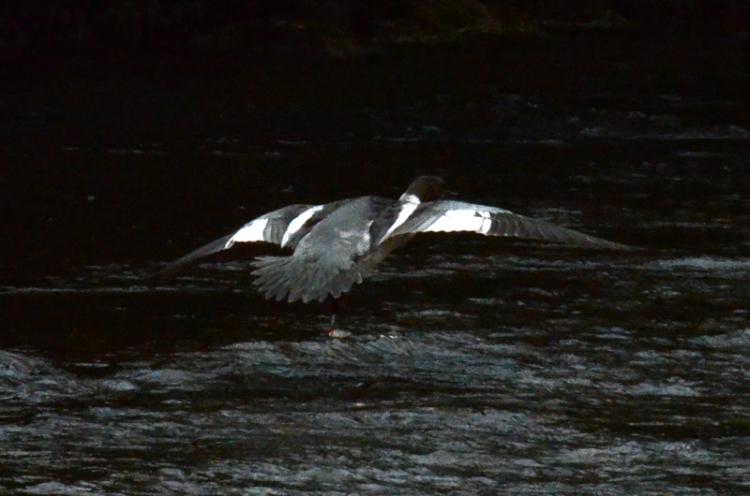 The dipper was more camera friendly and came and posed for me beside a duck so that a size comparison could be made.   That’s my kind of bird. 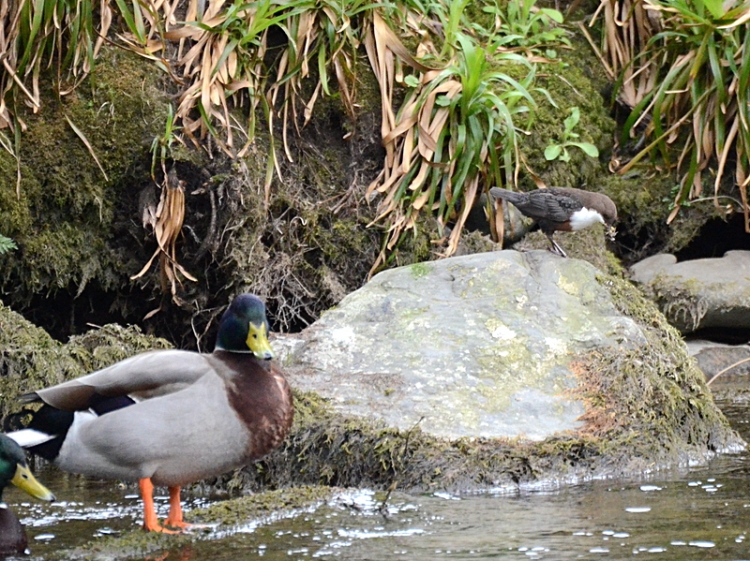 When I got home, I  managed to sieve a bucket of compost and mow the front lawn before Mrs Tootlepedal arrived back just in time to watch the Grand National Handicap Steeplechase.  It is a fantastic but rather grotesque spectacle and there was an extremely exciting finish but two more horses were killed in the course of the race this year. The racing fraternity try hard to justify the death of horses in the name of sport but if two jockeys were killed every year, however much they enjoyed racing, I find it hard to believe that the race would continue.

I had the new lens on trial from a friend but I liked it so much that I have bought it off him.  I hope I have the strength to lug it about but it certainly should improve my through-the-window shots on good days.

Today’s chaffinch appears by courtesy of the new lens but not at full stretch. 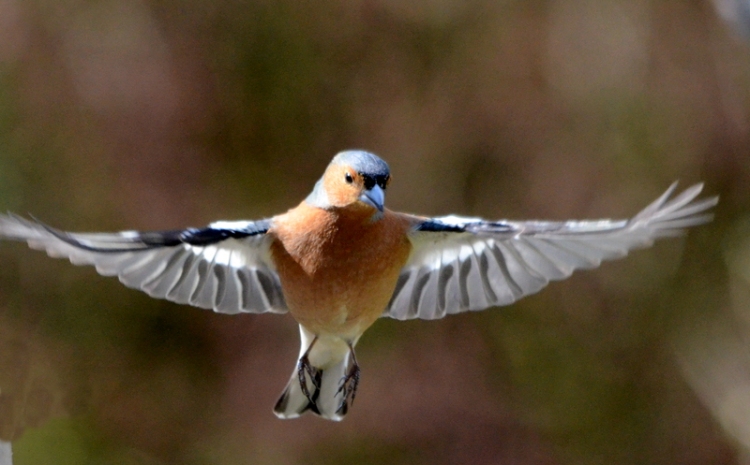