Today’s picture is another from the sibling’s Welsh trip, this time from the camera of my sister Susan. 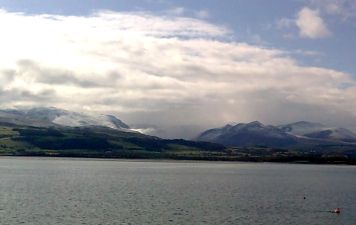 Anther forecast of rain led to another fine day in Langholm, thanks again to the northerly wind.  Dropscone and I would have set off for the morning run in good spirits if Drop’s gears had not malfunctioned once again leaving him marooned in a low gear in our drive.  A call to his house to pick up his second best bike was accomplished without much delay and we set off again with the merest hint of a rain drop here and there.  These sporadic droplets persisted until Canonbie, where they gave up entirely and we cycled home in fine weather and without further incident until two hundred yards from the house when Dropscone hit a bump and punctured.  He is not enjoying the best of luck in regards to his bicycle stock at the moment.

Good coffee and scones cheered us up and I took him and his bike back to his house in the Kangoo.

Mrs Tootlepedal has mildly expressed the opinion that as far as my blog went, she might have seen almost as many shots of chaffinches as she really needed to see in order to have a good idea of what a chaffinch looked like.  She went on to suggest that the occasional flower shot might make a pleasant change.  I am well known to be very sensitive to the views and feelings of others so today’s blog will have many flowers and no goldfinches, siskins or chaffinches. 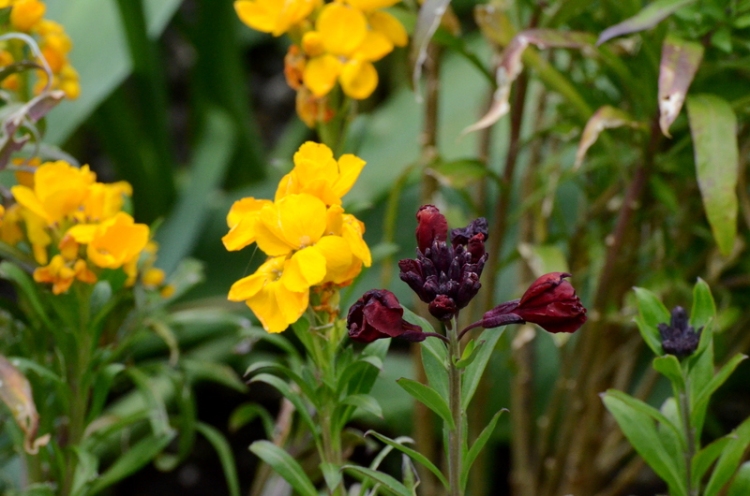 The wallflowers are progressing towards their full glory.   A few warm days would be welcome to speed the process up.

Mrs Tootlepedal also asked if I could take more pictures where the birds looked at the camera.  I am always happy to oblige. 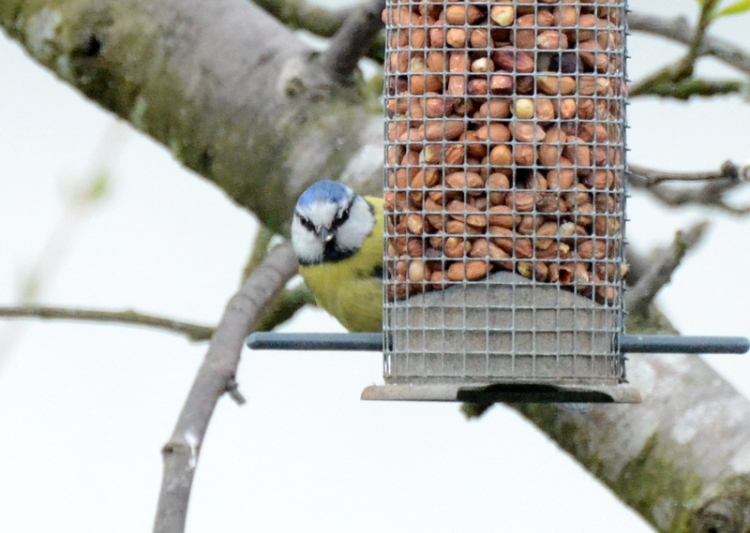 It is interesting to me to see how they deal with the wire when pecking at the peanuts.  Somehow, I always imagined that they would peck between the wires but the camera shows that the sparrows don’t.  I am not quite sure how they actually manage to eat the nuts.

Other birds did appear in the garden but being publicity shy, they sneaked away before I could snap them properly.

After I had taken a few pictures, I went up to the High Street and this time managed to take both the donations and the pay-in book to the RBS at the same time and successfully added a couple of donations to the Archive Group’s bank account.  This was a triumph.  I got some more medicine from the chemist at the same time, thus killing two birds with one stone….although that is a very unfortunate phrase for me to use.

When I got home, I noticed that the shy rook was back. 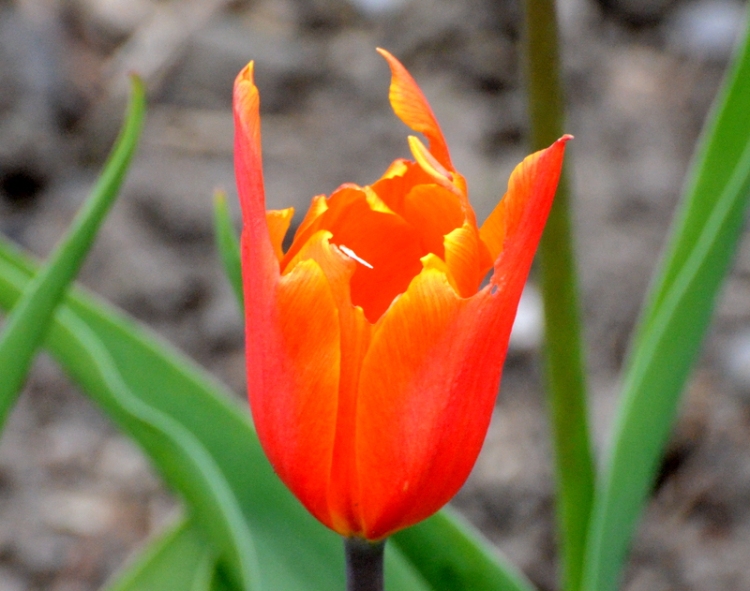 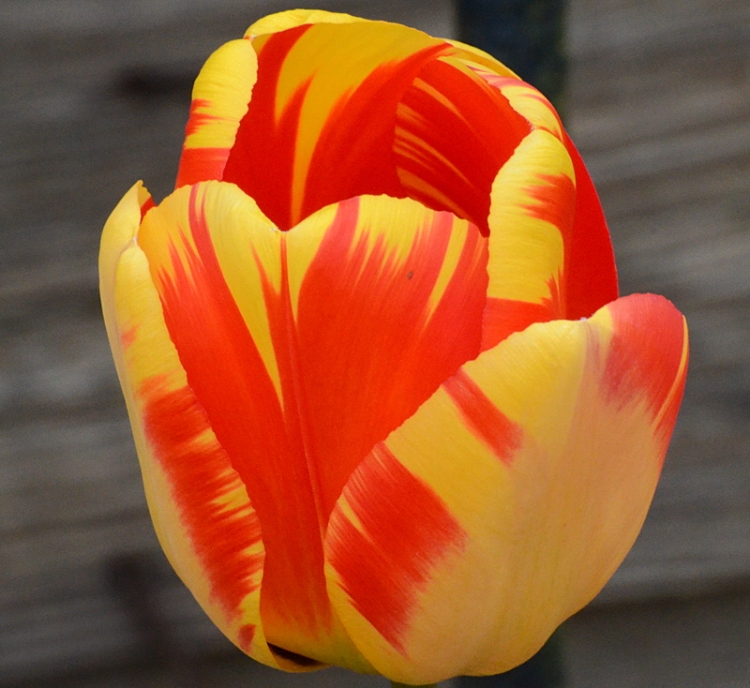 The tulips are in their prime but the daffodils, which have lasted very well, are coming to the end of the road. 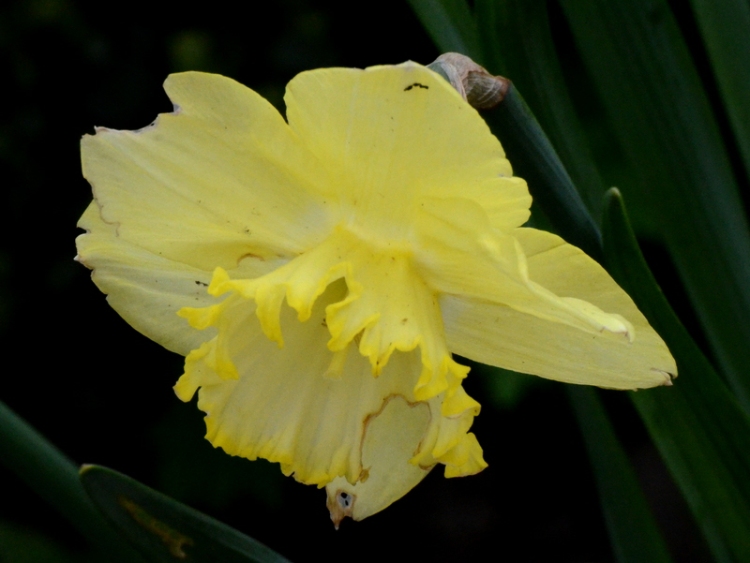 I looked in the pond for signs of life after the recent visit of the heron but could see no frogs or tadpoles.  The pond skaters seem to be thriving in their absence. 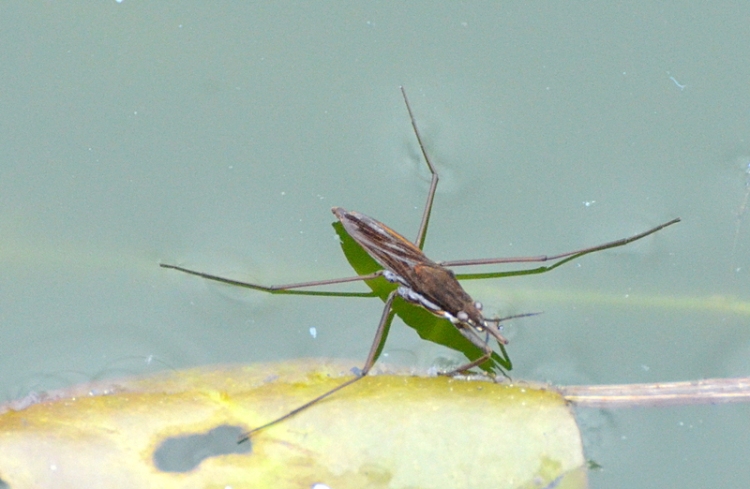 I’ll have to catch one in a jam jar one of these days to get a good photograph of those bulbous eyes.

The garden is full of dogtooth violets.  I haven’t really noticed them before but this year, they have really caught my eye.

I turned a bit more of the compost heap and then went in to make celery and Stilton soup for lunch.  This is one of my favourites.  Someone has recommended that I try broccoli and Stilton as a variant and I keep meaning to make it but then I forget and make celery soup again.

If Mrs Tootlepedal has read this far, I hope she appreciates the lack of chaffinches today.  I did succumb to the temptation of these goldfinches on one of the box balls. 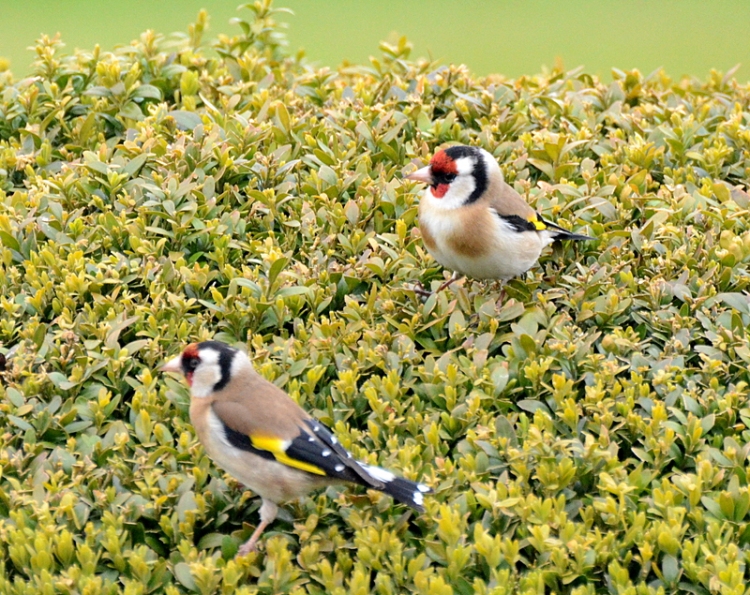 I couldn’t ignore the chaffinches altogether so I snapped a group having a quiet tea party away from the hurly burly on the hanging feeders. 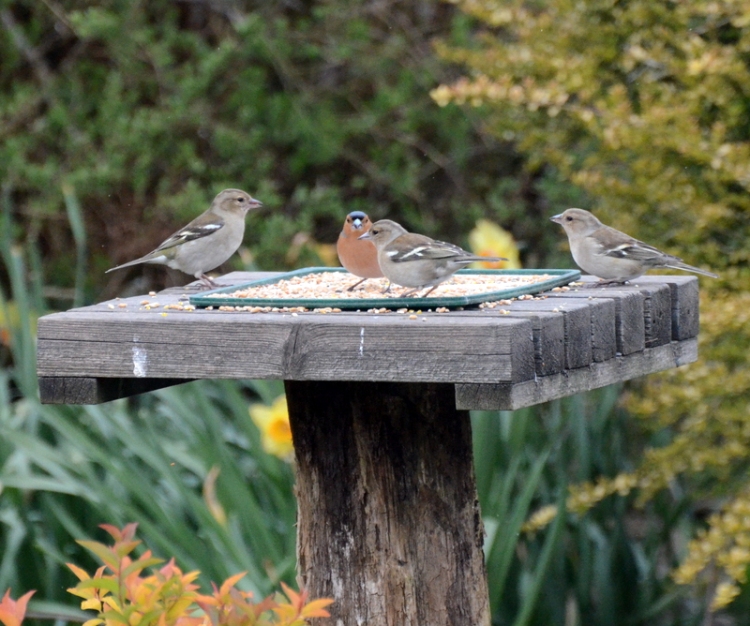 We were sitting around after eating the soup and wondering what to do when Mike Tinker rang up and suggested a visit to another nearby Roman Camp not far from Gilnockie station.  I was going to let Mrs Tootlepedal go without me because vestigial remains of old camps don’t enthrall me but then I  thought that it might offer me some good photo opportunities so I packed the camera up and joined them.  Sadly, as Mike parked the car, it started to rain quite heavily and, not wanting to find out whether the camera bag was waterproof or not, I chose to leave it in the car.

The visible remains of the Roman marching camp were slight but happily they were mostly in the middle of an absolutely lovely wood and we enjoyed an interesting stroll through this wood, walking along the bank that marked the edge of the fort, the old railway line and a variety of tracks and paths.  It  had stopped raining after about ten minutes and I spent the rest of the walk taking in the beautiful scenery and regretting that I had not been bolder and taken the camera with me.  I hope to come back with Mrs Tootlepedal when the bluebells are fully out in a week or two and take another walk with the camera in hand.

We had a cup of tea and a slice of cake when we got home and while the tea was brewing, I went out to fill the feeders yet again and took a picture of some plum blossom at the same time… 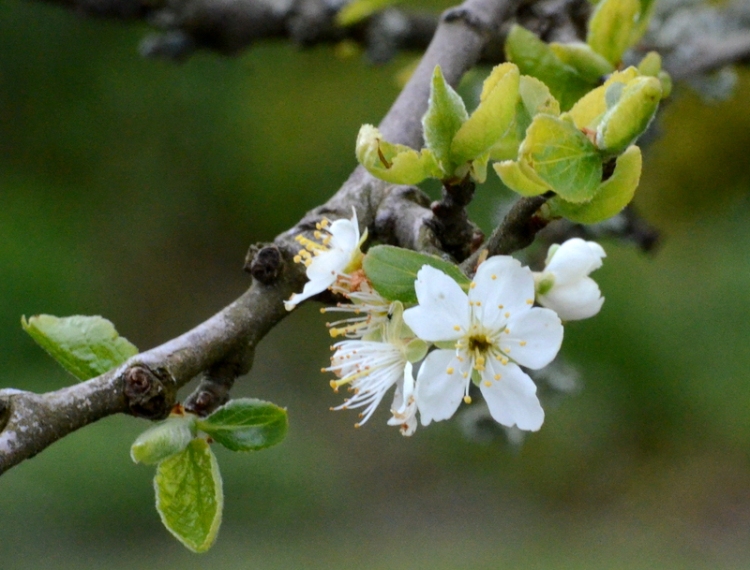 ..and a nice patch of colour as well. 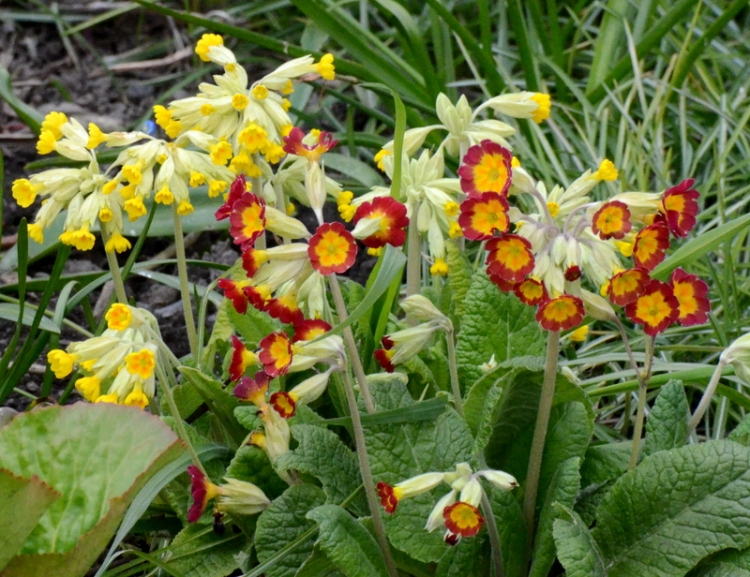 In the evening I went with Susan to Carlisle to play recorders.  The sky, as we approached the city, was spectacularly black and we feared that we might be washed away before we could get to Heather’s.  In the end we got their before the rain and enjoyed a hard working practice session for our forthcoming concert.  It is amazing how much practice you have to do for fifteen minutes playing.  On the plus side, it is very satisfactory to put in some hard work and see the group improve a piece as a result.  Next week, we intend to record part of the practice and that might give us a bit of a shock when we hear the playback.  By the time Susan and I got back to Langholm, it was raining  steadily, continuing the good policy the weather has had pursued of late  of only raining when it is dark.

Psst! If Mrs Tootlepedal isn’t looking, here are some bird shots from earlier in the day.  They may include, a chaffinch, a goldfinch and a siskin.