Today’s picture shows John and Andy, our end-to-end guests leaving this morning.  It was taken by Mrs Tootlepedal.

The reason that Mrs Tootlepedal took the photo and not me is that I was still lying asleep in bed by the time that they left and Mrs Tootlepedal hadn’t the heart to wake me.  When I did get up, the weather made me feel rather sorry for the cyclists as it was still cold and windy and they looked to have another hard day in front of them.

I am sticking to my easy life at the moment and the hardest thing I did in the morning was to go up to the town to get something for our tea, some pot scourers and my prescriptions.  In a daring way, I pedalled up on the slow bike.  As I went over the suspension bridge, I could see that there were plenty of birds skimming the river’s surface so when I got home, I pedalled back with the camera to see what I could make of them.  This is the result of many efforts.

These birds really are nippy and hard to pin down.

I took a look round the garden too.

There usual suspects were at the feeders and as usual the siskins were quickest on to the perches and slowest off them.  Here a chaffinch waits morosely in mid air in the hope of a nibble.

We were visited by a brambling which seemed to be coloured rather differently to the usual birds and so I wondered if it was perhaps a young one.

And added colour was provided by a redpoll on the sunflower seed feeder, a change from its usual preference for nyger seed.

I was a bit gloomy as the enforced rest is not making my aches and pains go away yet but I cheered myself up with a slice of haggis for my lunch and buoyed up by this, I set out for my afternoon walk, leaving Mrs Tootlepedal mowing the back lawn under the supervision of the big chicken.

I tried the swallows again but my best effort was a passing swift (I think).

As I walked up the bank of the Ewes Water, I was buzzed by a low flying heron anxious to get in the picture… 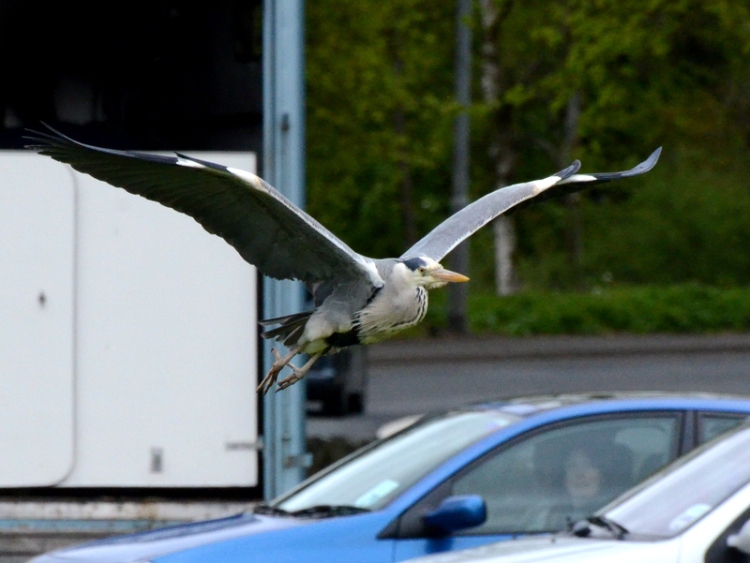 …but I ignored it.  There have been too many heron pictures lately. 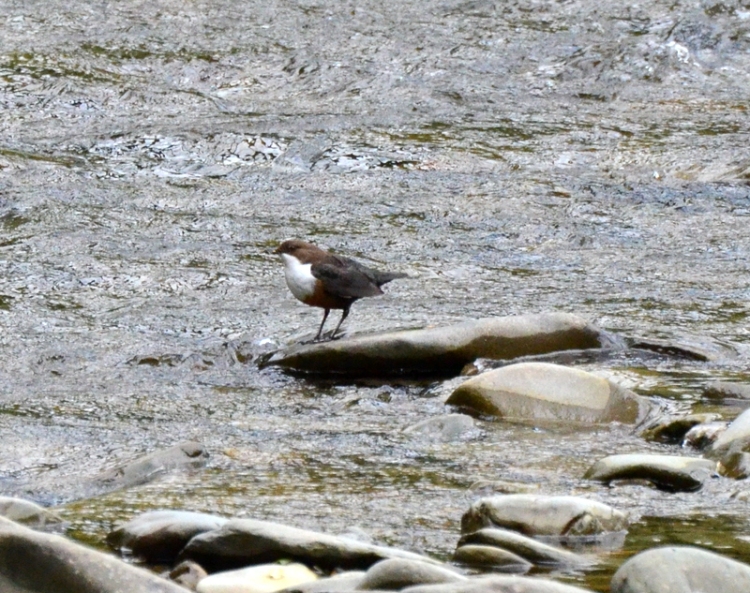 ..and then passed on to the cricket ground where a match was being played.   It was a rather stately affair with not much bounce in the wicket but I watched as a wicket fell (I just missed the shot as the batsman just missed the ball) and a run was scored.

I moved on to the second nuthatch nest were the birds were very active once again.

I set off for home after a while, stopping to admire a wagtail collecting food at the roadside… 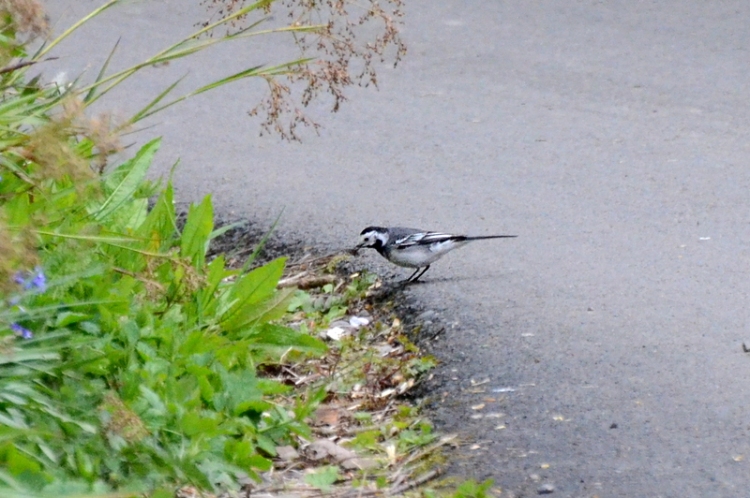 ..and a copper beech among the green leaves.

As I moved on, I was delighted to bump into Sandy who was also on a walk with his camera.  We walked back to the nuthatches and I was able to watch an old master at work. 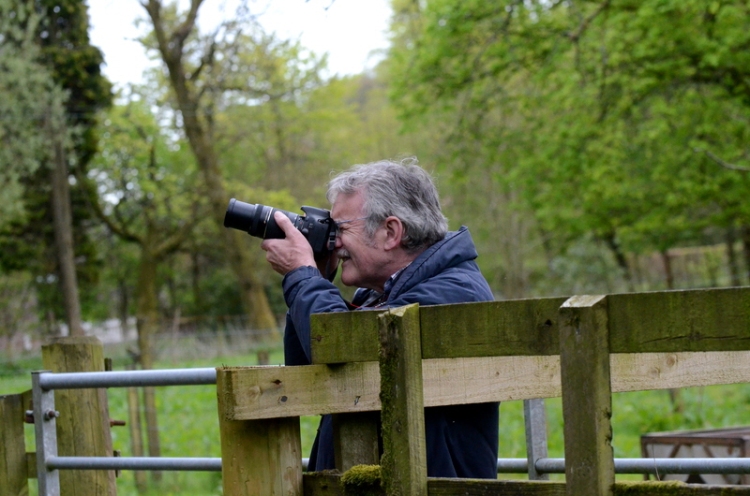 I took what may be my last nuthatch picture of the spring. 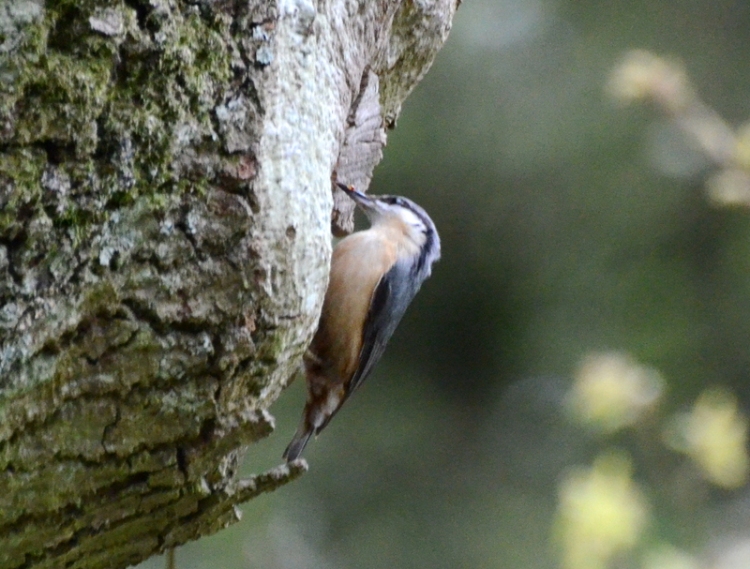 I say that because Sandy was able to capture a second nuthatch leaving the nest with the feeding bird and we wonder whether that was the young bird leaving home.  You will be able to see the picture he took on his blog in the course of time.

We got a glimpse of a wren as we walked on.

And we were both impressed by the spring colour on every side.

Then we turned to walk home along yet another delightful riverside path.

We saw no more wildlife and Sandy joined us for a cup of tea and a slice of walnut cake when we got home.  After he left, we welcomed more B&B guests and then I sat down to do some more work on the Archive talk which we are preparing and after tea, Sandy came back and we ran through the material we have got so far.  It looks as though it will be a reasonable effort though there is a fair bit of work to do yet.

Then it was my Saturday treat, two hours of the Swedish-Danish co-production, The Bridge.  Tonight’s episodes were the last of the series and apart from the rather contrived ending that such a series is bound to have, I sat enthralled for two hours.  I like the way that the Scandinavian producers  seem to feel that the audience might be quite intelligent and don’t need everything underlined by over acting or loud music to show them what to think.  It is relaxing and exciting to watch at the same time.  Of course, the fact that there are serious roles for women in their dramas doesn’t hurt either.

Today’s chaffinch after all this excitement turns out to be six ducks. 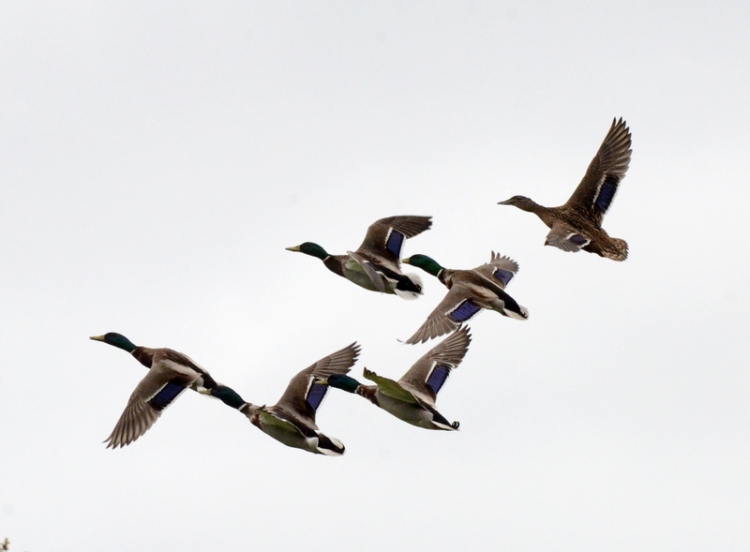 I am sorry for the picture heavy blog but it was  a busy day with the camera.

19 thoughts on “An unexpected meeting”