Today’s picture shows the closest that the Olympic torch got to us.  It was taken yesterday in Gretna by Bruce and the torch bearer is an ex-pupil of his.

We were promised rain today and we got rain so once again the morning pedal was abandoned but consolation was at hand in the form of some eponymous baking.

The drop scones were accompanied by Dropscone and we enjoyed our normal coffee and conversation.  Mrs Tootlepedal was present and was glancing out of the window when she cried out, “Get the camera!”  Unfortunately I only had the little camera to hand and couldn’t do justice to the harrowing scene outside.

The baby siskins make an easy target for the sparrow hawk just now because they stand out in the open and move slowly.  This is another one with no more time to learn how to get away.

I don’t know if the hawk is feeding young ones along with the other birds but we seem to have had many more visits over the last few days than is normal.

After coffee, I put on my rain gear and went up to fill the feeders at the Moorland Feeding Station.  Having learned my lesson from two days ago, I also put on a lot of anti-midge stuff.  This was good because the midgies were out in force again when I got there.  I filled the feeders and watched the birds for a while…

…but it was pretty gloomy and although there were woodpeckers about, I didn’t linger and beat a quick retreat.

The birds in the garden were easier to see and there were no midgies in the kitchen so I stared out of the window for a bit when I got back.  There is a whole lot of kicking going on. 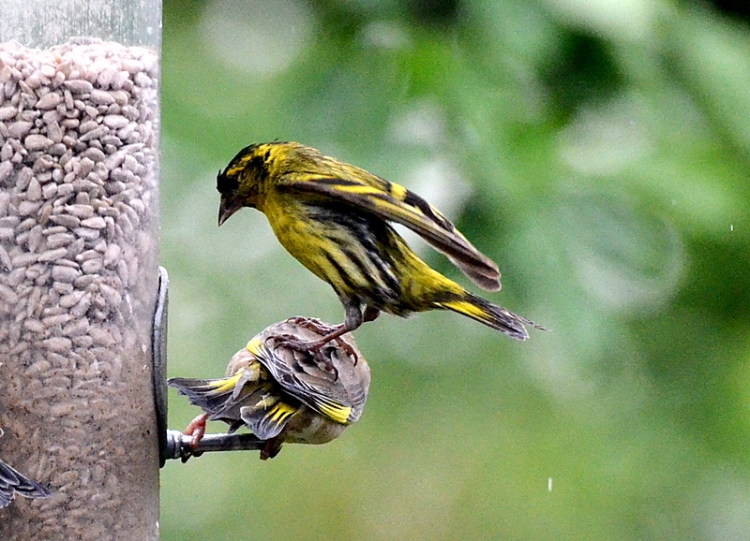 The rain almost stopped so I went out into the garden.  The potatoes which I planted in two bags are thriving and the ones in the greenhouse have burst into flower.

They are looking so good that I am worried in case my expectations are being falsely raised.  Still, it will be exciting to open the bags in due course.  The point of putting them in bags is to try to avoid the new potatoes being eaten by slugs so if, when I open them, they have been slugged, there will be weeping and gnashing of teeth.

In the gloomy garden, there is still colour about if rather damp.

Mrs Tootlepedal has a number of clematis lurking under and behind other plants and it is always a treat when a new flower unexpectedly emerges.  I looked for ducklings in the dam but only found flowers.

And then it was lunch time.  A rainy morning had been filled with good food, good coffee, good conversation, interesting birds and colourful flowers.  I have remarked before that being old is often not a great hardship at all.

After lunch, I went up to the Town Hall to see if our volunteer had opened the photo exhibition.  There was no sign of him so I opened up and sat in myself.  I was expecting a dull afternoon but in the event there wasn’t a moment when there wasn’t someone in looking at the pictures.

Some of my pictures are the first ones on the left and I am certainly going to get frames if we have another exhibition as they look much better framed.  The hanging system is rather higgledy piggledy but the visitors do not seem to mind.

Rather annoyingly since the exhibition was quite busy, I had to close up and throw out some visitors who were still looking at photos because I had to get home as we were expecting B&B guests and Mrs Tootlepedal had commitments.

She was going to help with the putting up of the hanging baskets in the High Street.  Almost as soon as she had gone, the sparrowhawk returned and I had my good camera to hand.  In one of those moments that are sent to try us, just as I was getting focussed, the phone rang.  If I was a proper photographer I would have let it ring and taken twenty pictures but I couldn’t do it so this snatched effort is the best that I could manage.

Visitors to the gallery told me that when they had come through Carlisle earlier, the weather had been truly awful.  One described it as being like standing around while people poured buckets of water over your head.  In Langholm, however, the weather was quite pleasant by this time and while Mrs Tootlepedal and team with a gang of fine boys put the baskets up…

…I walked round the garden in sunshine.

Among the many birds enjoying the break from the rain, this rook took advantage of a puddle to sneak a drink.

Mrs Tootlepedal was feeling particularly pleased when she came home because the moment that they had finished putting up the hanging baskets, it had started to rain.

In the evening, Mike and Alison came round and I enjoyed a really good tootle with Alison.  We are trying to keep to a fairly limited amount of pieces at the moment and this does mean that they tend to sound better and go more quickly each week which is very satisfying.  We played sonatas by Handel, Mancini and Marcello for those interested in such things.

In the end, what had looked from the forecast to be a most unpromising day turned out very well in every respect (except cycling but you can’t get everything you want).

Today’s flying bird is a siskin but since I didn’t have much time and it was very gloomy in the morning, it is a bit of a cheat as it is not a solo shot.