Today’s picture is of a stile crossed by my brother Andrew when he came to it. 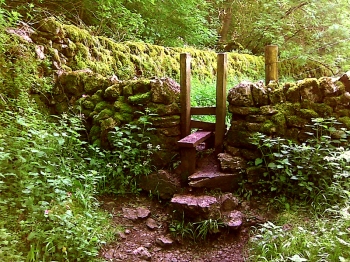 It was another dark, dank day today with rain either coming down, just having stopped coming down or just being about to start coming down.  As a result I took the idea of resting to rather extreme lengths and did very little.  I had to go up to the Town Hall in the morning to get the key to be able to open it for the afternoon session of the photo exhibition and I had to go up and open it in the afternoon.  For the rest of the day, sitting down was the most popular occupation.

I did stand for long enough to take a two minute sequence of intense feeder action.

I could repeat a sequence like that for most of the day and the seed is going down in the feeder at a great rate of knots.  The rain doesn’t seem to put them off and they keep it up from well before I get up until the late evening.  I do wonder whether the effort of getting onto the feeder and keeping position there uses up more energy than they can gain from the seed but I suppose that if it did, they would go somewhere else.  I am sure that if we got a spell of better weather, the frenzy would subside.

I might add that two minutes after that sequence a pair of greenfinches joined in the fun.

In one of the dry spells, I went out to check on the potatoes.  I have got one bag inside and one bag outside the greenhouse to try to get a spread of harvest.  The outside bag is showing a single flower… 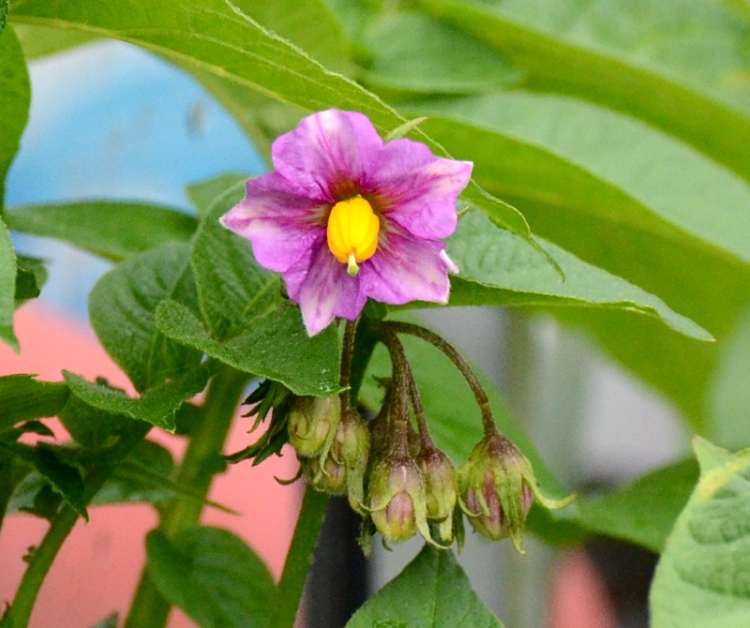 …and the inside one does seem to be a bit ahead. 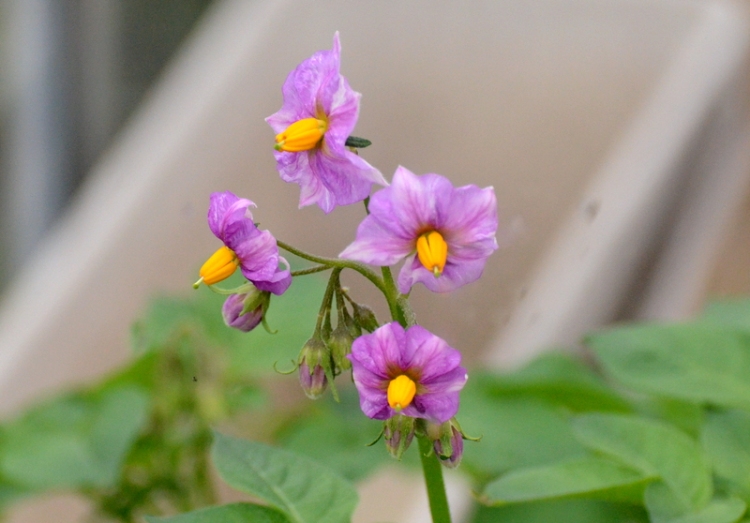 It will take considerable self restraint not to go poking around in the bags before the potatoes are fully grown.

We have a climbing hydrangea on the front wall of the house which Mrs Tootlepedal cut back severely two years ago.  It has recovered well and is just starting to flower. 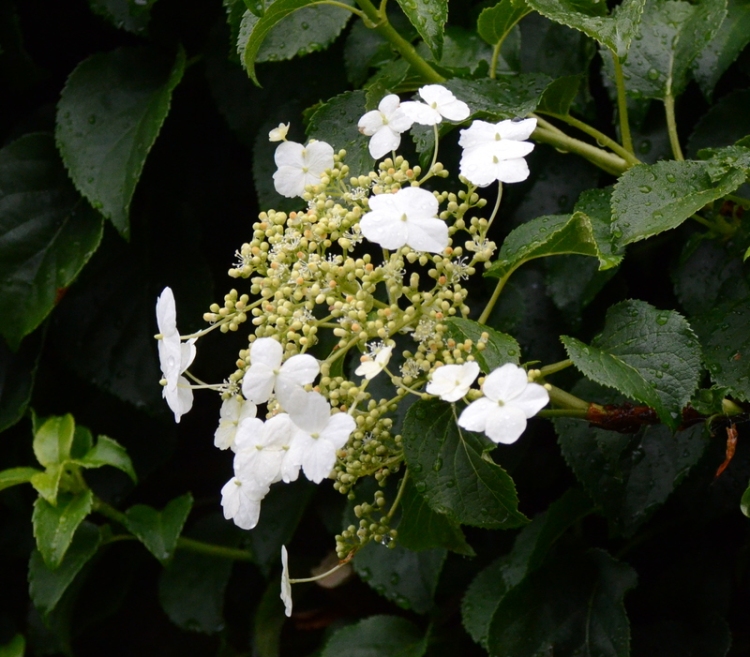 Mrs Tootlepedal fears that it may have stuck its roots into our drainage system which might account for its strong growth.

After lunch, I took a quick feeder picture to show the continuing action…

…and then went back to the Town Hall to open the exhibition.  I had no customers for the first hour and was getting a bit bored when the door opened and Sandy, his wife and two friends came in.  They spent a good deal of time looking at the pictures and chatting and the second hour passed in a flash so I locked up feeling that it had been well worthwhile to open up on a wet Saturday afternoon after all.

When I got home, I discovered Mrs Tootlepedal ensconced in front of the TV watching the horse racing from Ascot.  This was so unusual that I had to sit down to recover from the shock and didn’t manage to get out of my seat again until the racing had finished (and the Olympic athletics trials that followed).  All that added up to four hours of sitting around since lunchtime so I took the little camera out to see whether the rain had caused the rivers to rise to an extent worth photographing.

There were a family of ducks in the still water behind the Kirk Bridge. 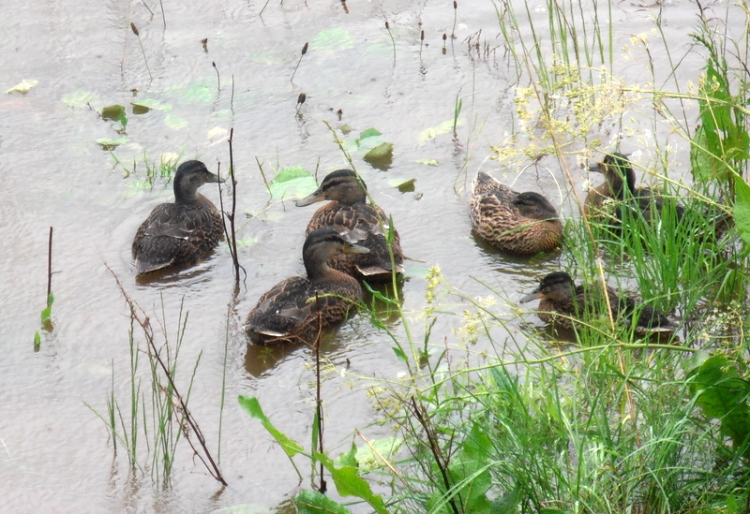 You wouldn’t think that a few yards away, the Esk was like this…

An oyster catcher stood on the rocks on the edge of the foaming torrent.

Then it was home and a chance to watch the sad sight of people mopping up after last night’s floods in places not very far south of us.  We have been lucky in spite of two wet days.  We might even see the sun tomorrow.  I hope so as I need to get out on the bike to stretch the few muscles that I have got left.

Today’s flying bird is a goldfinch. 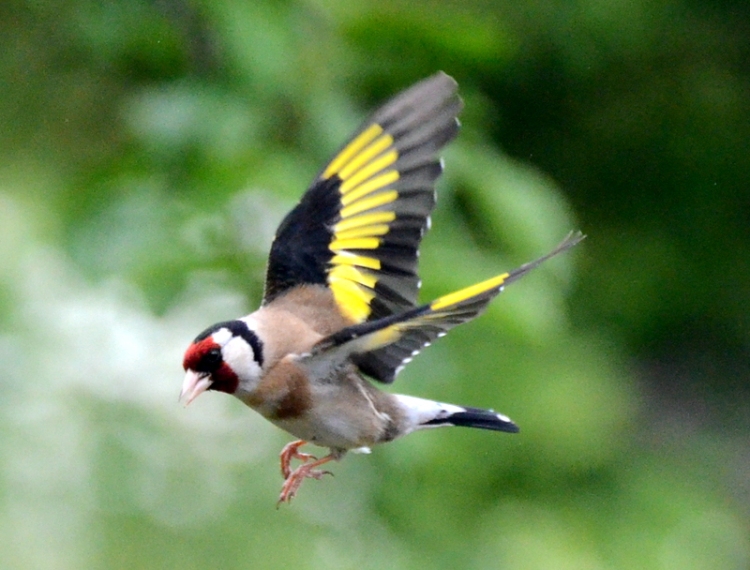 Note: The cameras and the photo editor between them make the day look a lot nicer than it really was.  It was a horrible, gloomy day today.