Today’s picture shows a bit of our old oak gatepost transformed by Mike, the cellist, who is also a skilled wood turner.

Today couldn’t match the photo opportunities of yesterday as it was very grey and cold with a sprinkling of new snow on the ground.  There wasn’t enough snow to be pretty so it was just a nuisance.  Dropscone came and carried me off to the gym where I pedalled a very stately notional 15 miles while he rowed, pedalled, shifted weights and did floor exercises.  It made me quite tired watching him.  Luckily there were scones and coffee as usual to revive us.

Dropscone became a grandfather over the weekend and I must say, he looked more responsible and mature as a result.  I would have put a picture of the baby on the blog but he has often complained about there being too many babies in the picture of the day so I didn’t want to upset him.

The morning was so dreary that I didn’t even try to take a picture until after lunch when some chaffinches flying in all directions caught my eye.

Traffic was relatively light at the feeders because the birds don’t seem to want to travel much in freezing conditions and who can blame them.

Two goldfinches did visit us though. 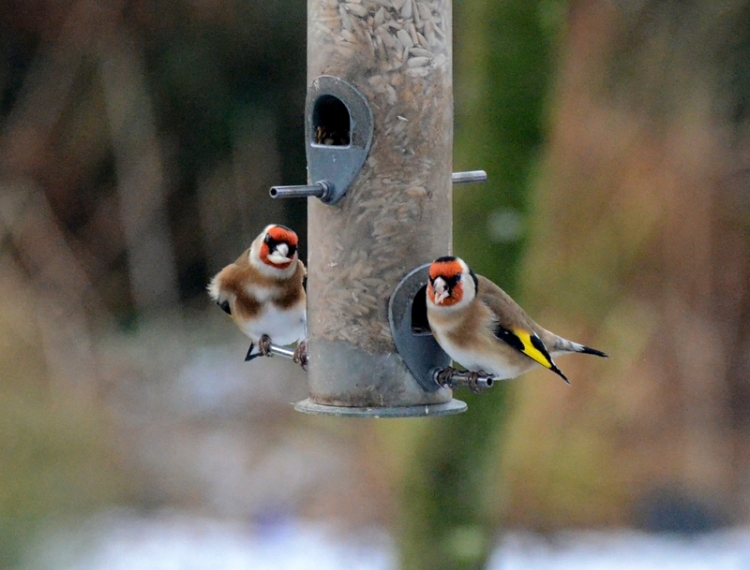 I watched the plum tree for a while…

Mrs Tootlepedal went out to visit the High Street for some small baskets for the new kitchen and combined this with a healthy walk so I rang up Sandy and we went for a healthy walk  too.

We stopped to admire a row of gulls on the fence of the Castleholm.

They obligingly lifted up and performed some slow glides for the camera.

They are black headed gulls and are more peaceful than the rather raucous herring gulls of the seaside and town centres.  Their ability to hold a pose for a picture is much appreciated by me.

We walked on up the Lodge Walks and then round the pheasant hatchery.    We were guided on our way by the phootsteps of phantom pheasants.

It was still very grey and trees with a light snow covering on the branches loomed out of the general gloom.

The Brothers Grimm would have felt at home here.  The road and tracks were covered in snow…

…but the going was safe enough under foot.  One advantage of the winter is that you can see the trees when there are no leaves to get in the way. 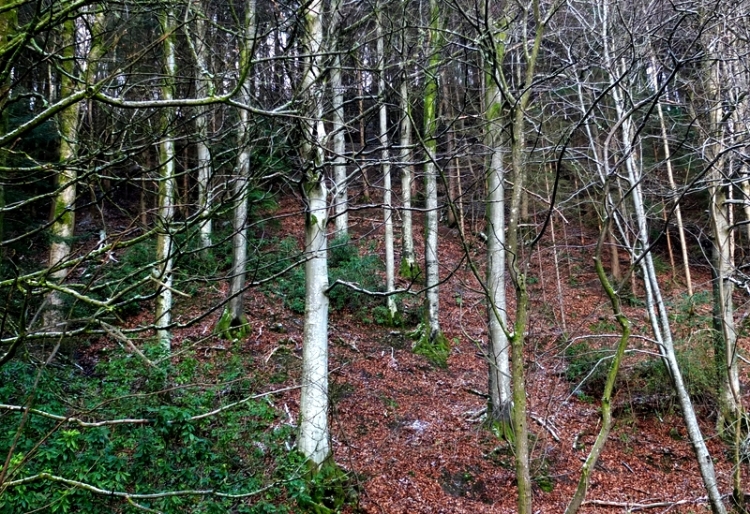 It would take a better dendrologist than me (that means almost anyone in the world) to explain why these three trees, of the same sort and standing so close to each other, have developed so differently.  One goes straight up, the next twists gently to the right and the third corkscrews to the left.  And why is the first one so much more covered with moss than the ones behind? It’s a mystery.  Even on a grey day, these trees look lovely.

We walked back along the river and as we walked a low mist rose from the middle of the field.

We wondered whether we would have been above the mist and in the sunlight if we had followed the ridge which I walked along last weekend instead of sticking to the low ground. 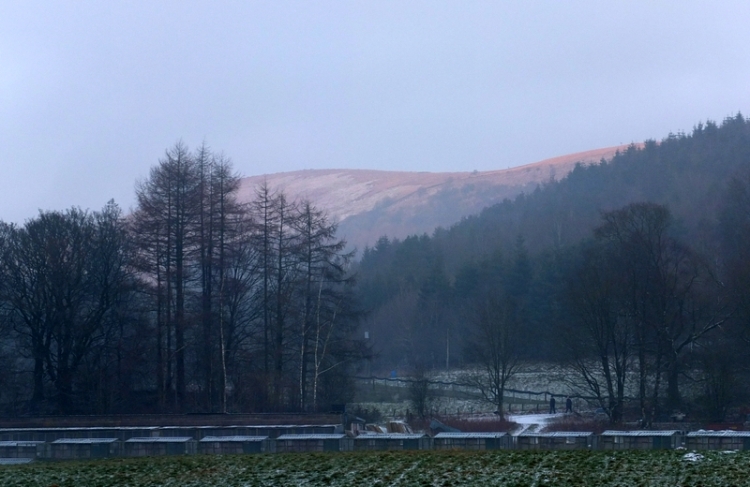 It looked suspiciously bright up there.

It certainly wasn’t bright at ground level but we could only just see the monument through the mist.

It wasn’t quite that grey but the scene seemed to call for a black and white photo.

I took a picture of Sandy putting his best foot forward as we went.

We passed the Duchess’ Bridge on our way home and its elegant geometry was enhanced by the snow.

We enjoyed a warming cup of tea with a few of my birthday biscuits (only 246 left) when we got back.

After Sandy left, I spent some time on the computer and then it was time for tea and almost immediately,  the return of Sandy to go to the Archive Centre with Jean to do our usual weekly session.  Sandy is working on scanning and sorting a meticulous photo collection which has been lent to us.  It records many of the physical changes that have taken place in the town over the past few decades and will be an invaluable resource in the future.  Jean and I noted the first appearance of broccoli in a grocer’s advertisement in the Eskdale and Liddesdale Advertiser.  Since this was in 1884, Jean was surprised that it didn’t seem to be eaten at all when she was young some 50-60 years later.

We enjoyed a refreshment in the Douglas afterwards and felt that it was well earned.

I did catch a chaffinch doing a somersault for the flying bird of the day.

19 thoughts on “Stepping out”