Today’s picture shows Wauchope Street at 1.30 a.m. this morning when we got back from the Gilnockie Burns Supper.

It had been snowing like that for some hours and it became a distinct possibility that either the supper would be cancelled or we wouldn’t be able to get to it.  In the end, thanks to the energy of the organisers and the four wheel drive of our neighbour Liz’s car, the supper stayed on and we arrived safely.  Not all the audience had managed to make it but the hall was comfortably full when we sat down to dinner.  My part in the proceedings, the toast to Robert Burns’ Immortal Memory, went off without me being pelted with bread rolls so that must be counted as satisfactory.  It was probably still five minutes too long  but I enjoyed it and I can only leave to it others to say if my efforts were any good.

I had made a plea at the end of my talk for a more active interest in creating poems as an enduring tribute to the great man and a pleasing thing was a phone call this afternoon from the organiser who read me the first part of a fine poem which she had started to write about the occasion.   She also told me that she hopes the committee will take up my suggestion for a small prize for the best poem of the year by a member of the audience.  I shall have to sharpen my pencil as Mrs Tootlepedal won two free tickets to next year’s event in the raffle.

When we woke up (late) this morning, we were confronted with what can only be described as a winter wonderland.

WARNING:  THERE ARE FAR TOO MANY PICTURES IN TODAY’S POST  (twice as many as usual).

The sun was out, the snow was deep and crisp and even and everyone was in a good mood. Especially Hannah who was being pulled along the street but her mum.

The picture has not been touched up unduly, the road really was as white as ….as white as…. well, as white as snow.

The view from my bedroom window was so inviting that I rang up Sandy and we arranged to go for a photographic walk.

While I was waiting for him to appear, I wandered round the garden looking for arty shots. 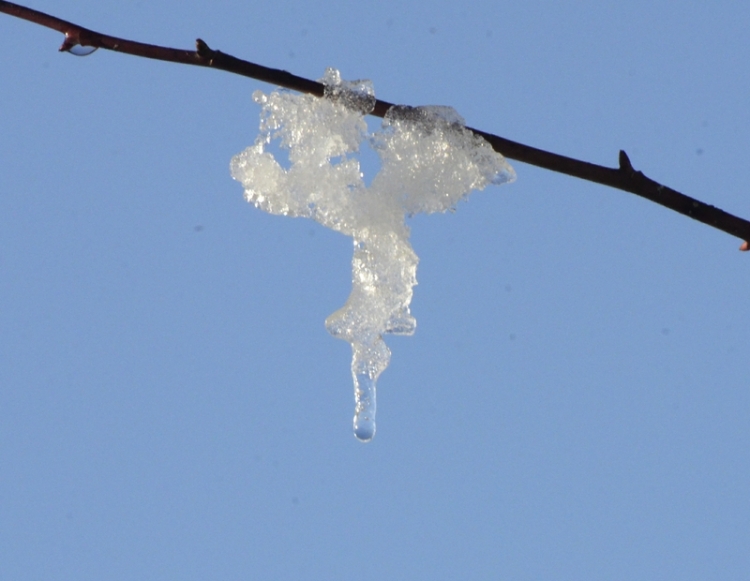 It was quite warm and the snow which hung heavy on the branches was beginning to slip off silently. 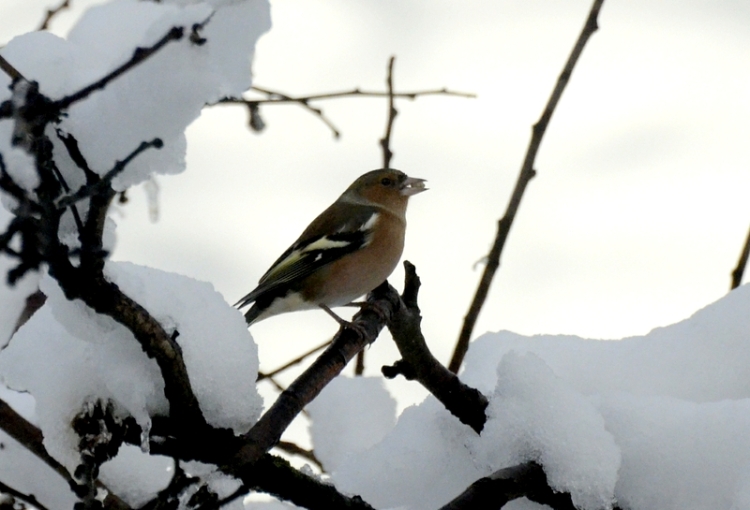 Even this early in the day, I could see with the aid of my zoom lens that there had been a lot of traffic on the top of Castle Hill…. 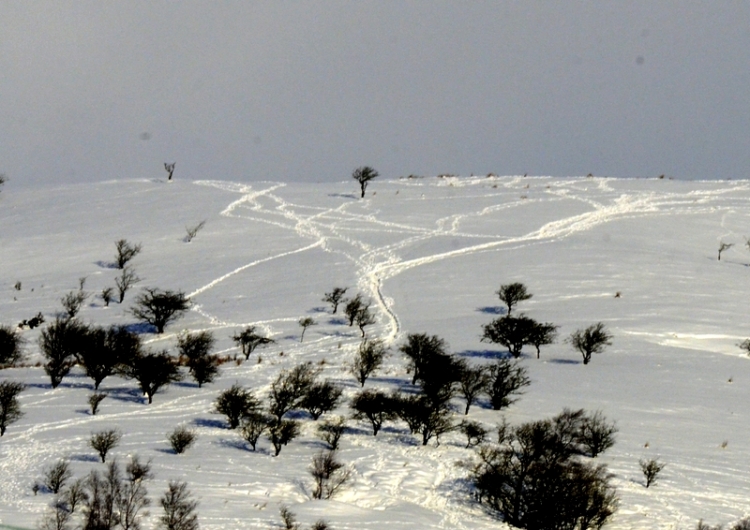 Sandy arrived and we took our cameras off for a snow tour, starting with a walk to the river.  On every side, the views were stunning.  This was the Buccleuch Park, which we glanced at as we passed it.

The low sunlight picked out the wall striding up the side of Whita hill. 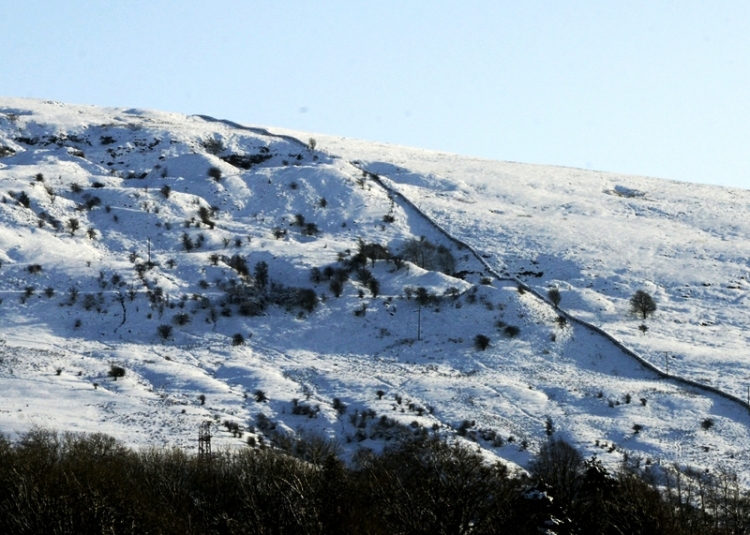 We walked along the river, Sandy on one side and I on the other.  This was my view. 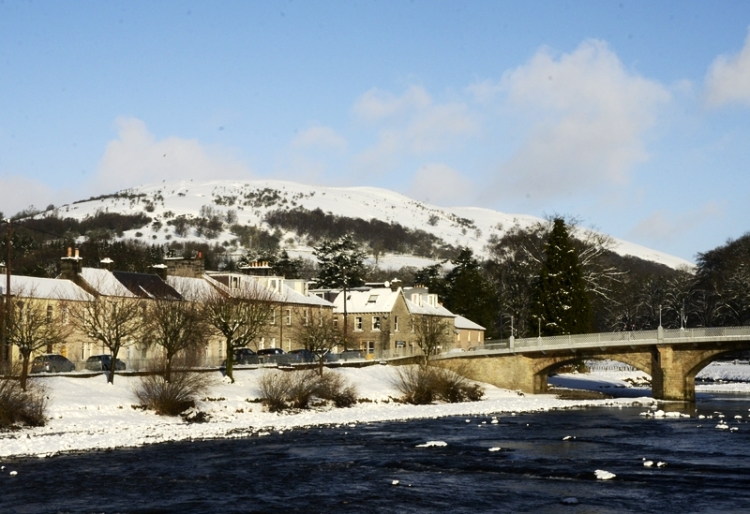 I looked through the Town Brig towards the Sawmill Brig…

…and then walked up onto the bridge itself. 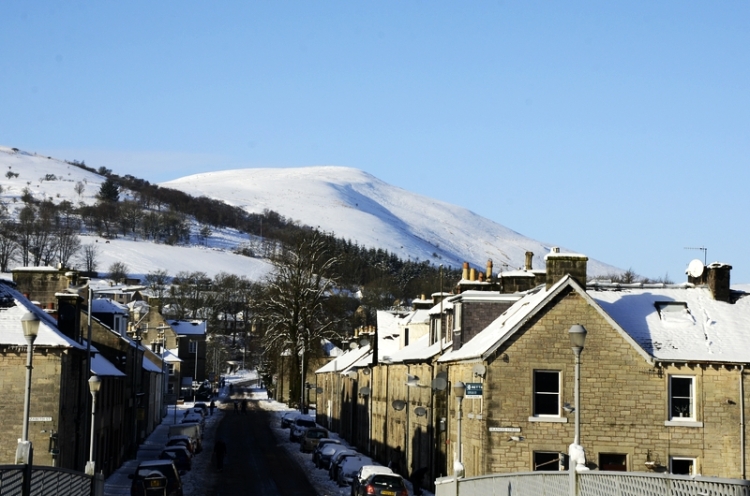 This is the view down Thomas Telford Road.  The snow capped top of Timpen looked very inviting but the prospect of ploughing through foot deep snow to get to the top was too daunting.   I took a picture of some squabbling gulls instead where a kind hearted soul had thrown down some bread. 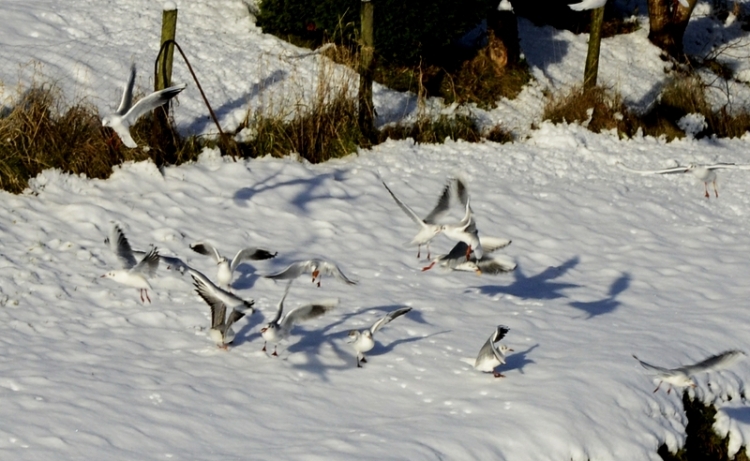 It was hard to make out what was happening with the white on white situation but when one flew off with a prize, it became clearer.

We took the easy climbing route and walked up Drove Road and Arkinholm Terrace to the bottom of the golf course.  Of course, we stopped as we went up to take some snowy snaps.

One famous crossword setter whose work I enjoy every week in the paper is named after this striking tree which we encountered.

At the top of the Kirk Wynd slope, we stopped for a breather and a chance to catch some enthusiastic tobogganers.

Then we turned to continue on up the track past the golf course and on to the hill.  Once again, we found shots to distract us as we went.  We were grateful for these as it was heavy going  in the snow.

Sandy was leading the trek.

We plugged on till we got to Whita Well where there was quite a little gathering of walkers.  The steep slopes ahead discouraged us from further alpine ambitions.

We stayed with the sheep.

Even the pylons looked good today. 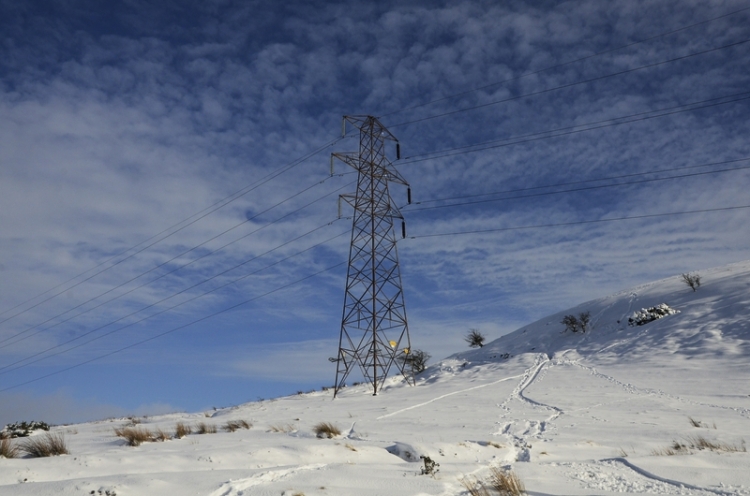 The track on the snow was made by a snow boarder but he/she had gone before we got there.

After a rest, we headed back down the hill.  We crossed the golf course and looked down on the town.

You can see Sandy’s house in the bottom left hand corner of the picture of Timpen.  As we went down the hill, Sandy slipped and fell headlong into the snow and with great self restraint, I didn’t take a picture of his downfall but actually went as far as to lend him a hand to get up.   How we laughed.  Our way down the hill was along untrodden territory. 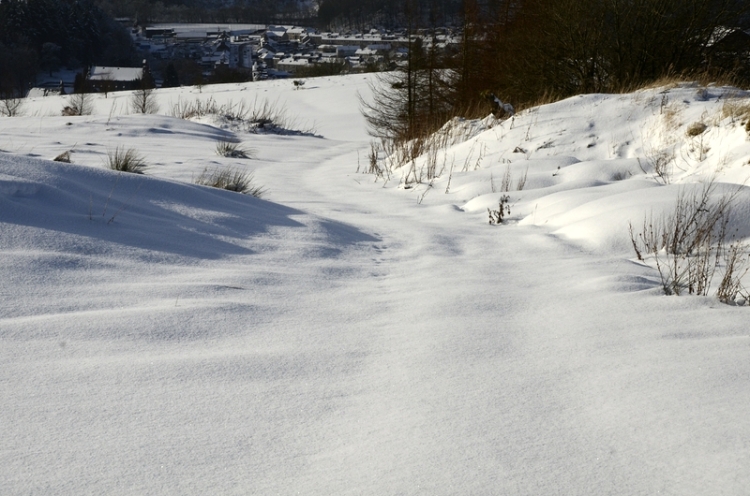 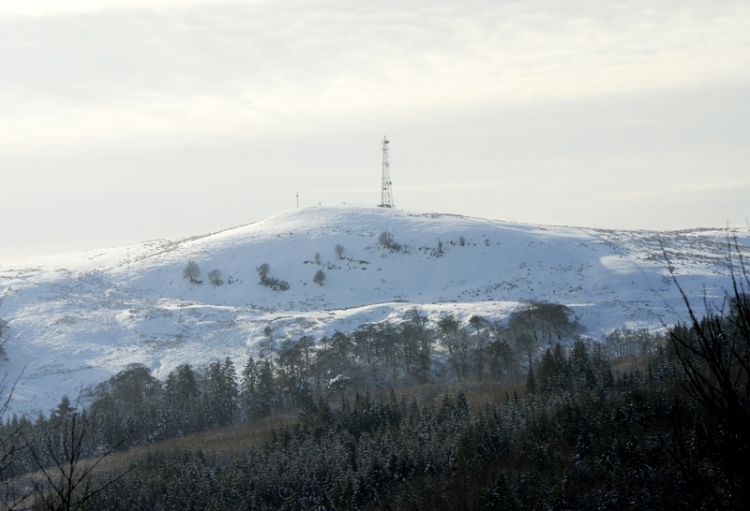 But looking further south, the skies were darker.

I consoled myself with a picturesque tree.

These were the only two people I met on the course.

The clubhouse had no golfers in it but was due to be used for a business meeting later in the day.

The sledgers were still at work as we came down the last stretch of the Kirk Wynd.  It was a scene of general merriment mixed with outbreaks of terror.

By this time, the sky above the roofs looked as solid as the snow beneath our feet.

We staggered through the town on weary legs and sank down gratefully when we made it into the kitchen where we enjoyed a cup of coffee and a cheese toastie each.  Mrs Tootlepedal who had been for a walk while we were out had also found it hard going in the snow so there was a good deal of mild groaning to go with lunch.

Sandy went off and apart from a few quick peeks out of the kitchen window….

…that was the end of my exertions for the day.  Our neighbout Liz came in for a cup of tea and we relived the excitements of the snowy journeys to and from Gilnockie last night and then I retired for a good soak in the bath where I completed a fine crossword (but not one set by Araucaria on this occasion).

I shall sleep well tonight after the late night last night and the fresh air of today.  Sorry about the excessive number of pictures but this blog does represent my daily diary and it was an unusually beautiful day.

I caught a flying chaffinch early in the day before the sun had come to the feeder. 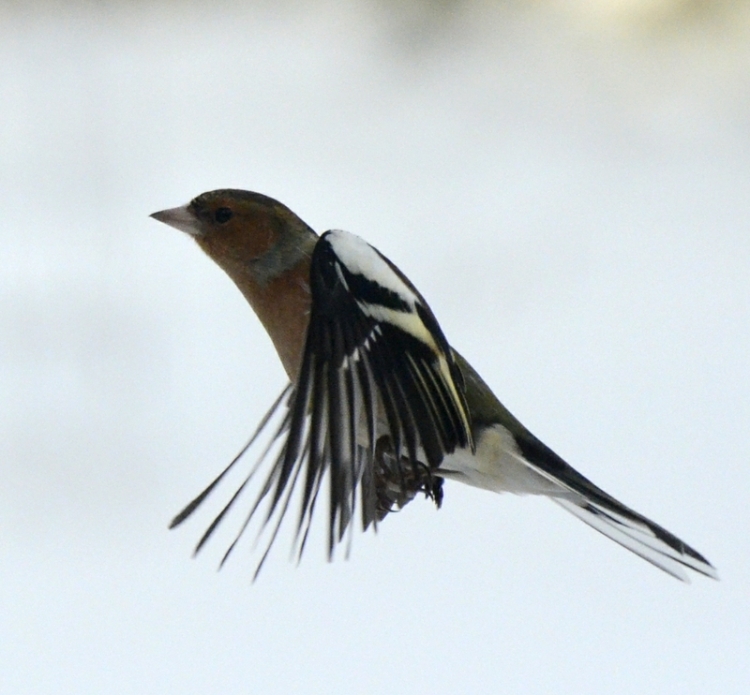 Visit Sandy’s blog to see his view of our day.

23 thoughts on “Snowed under”