Today’s picture shows the view from my window as I rose in the morning.

When I went downstairs, I took a reading from the scientifically accurate snow depth gauge…

The conditions certainly encouraged the birds to get stuck and three feederfuls of seed had disappeared by lunchtime.

Some birds looked down for a space at the feast…

…while others waited optimistically below for scraps from the above.

I thought that it looked like time for a walk but first I swept the snow off the pavement outside the house and then, taking my camera and putting on the wellies, I ventured out.  The snow had great covering power and was able to stick to almost anything.

As I walked between the bridges, I met Kenny…

…making me feel that if I had waited a bit, I might have saved myself the bother of sweeping my own pavement.

As I got to the end of the town bridge, a collared dove alighted on a snow laden branch a few feet from me.

I passed the heron standing in shallow water and looking his usual cheery self but as I didn’t have my zoom lens with me, he escaped unshot.

I turned to objects on land instead.  The childrens’ play park looked ghostly.

..and the  benches for visitors had yet to find a customer. 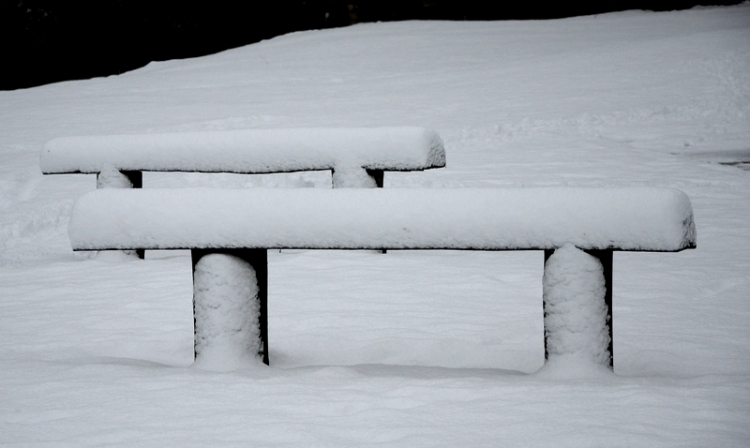 A couple of trees stood out from the general winter wonderfulness as I crossed the Castleholm.

I crossed one final bridge on my way home.

The slant of the railings is not a camera illusion.  They really do slope inwards.#

This was the view from the bridge.

The snow was beginning to fall from the branches by the time I got home and I was glad not to be walking through this potentially dripping woodland. 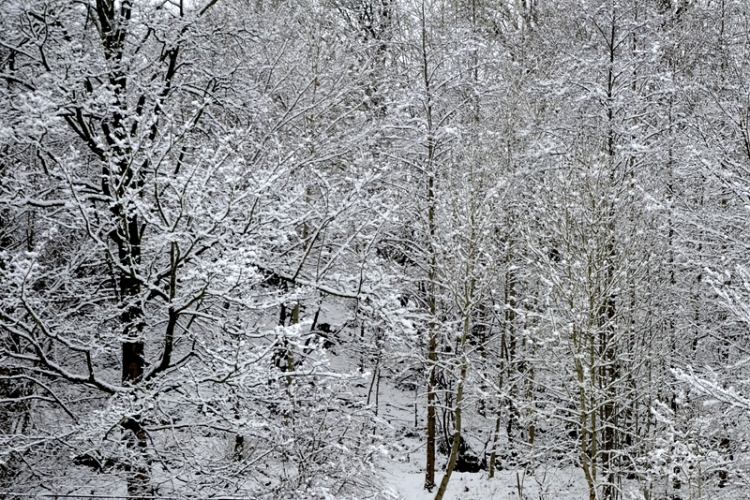 A lot of the rest of the day was spent recording my rehearsal clips for the choir, writing the results to disks and then copying and labelling the disks.  It wouldn’t have taken anything like so long if I had remembered what do without having to relearn old skills from a depressing litany of errors but in the end I got it done and even sat down and used one to practise my own part of one of the songs on it.  It will take more than one go to reach even a mediocre level of competence though.  I admire people who can sing well immensely.

In the evening, I went to Carlisle by myself  (Susan is in France) and enjoyed an evening of recorder quartets as one of our other players was off as well.  She was on a jazz course.  The snow had melted enough to leave the roads quite clear and safe which was a relief.

I snapped a gull on my morning walk and it is the flying bird of the day. 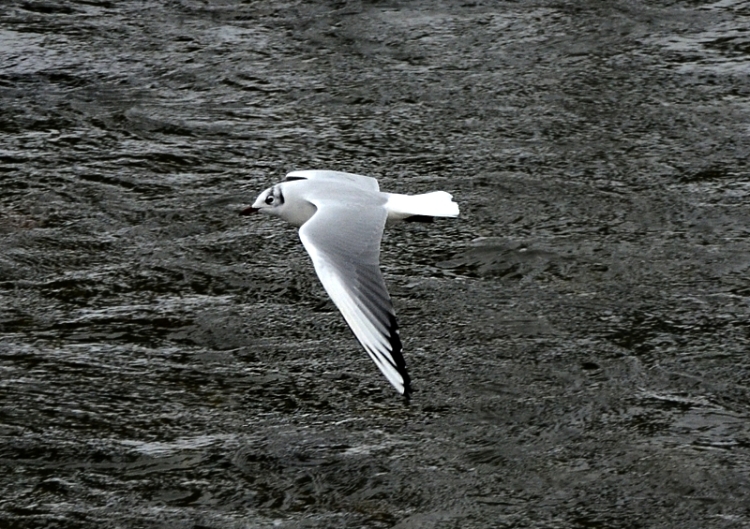