Today’s picture shows Alistair’s eagle in  a less threatening posture.  It does show how clever the jointing is on the model.

The weather turned out to be very nice today in spite of a not very promising forecast and in the absence of Dropscone on golfing business, I got myself up and organised and pedalled round the morning run after breakfast in lonely splendour.  The wind was a bit stronger than yesterday and had moved very slightly so that it was more of a pest coming back.  However, all was forgiven and forgotten in a glorious rush down the last three and a half miles in just over eight minutes with the full strength of the wind behind me.  I reached my maximum speed for the day (30 mph) on a fairly flat piece of road here rather than down any of the earlier hills.

In the absence of scones, I had to make do with toast and marmite with my coffee.

When I went to fill the bird feeder, I found something unusual in the bottom of the seed box….

…the birds on the other hand, were exactly as usual. 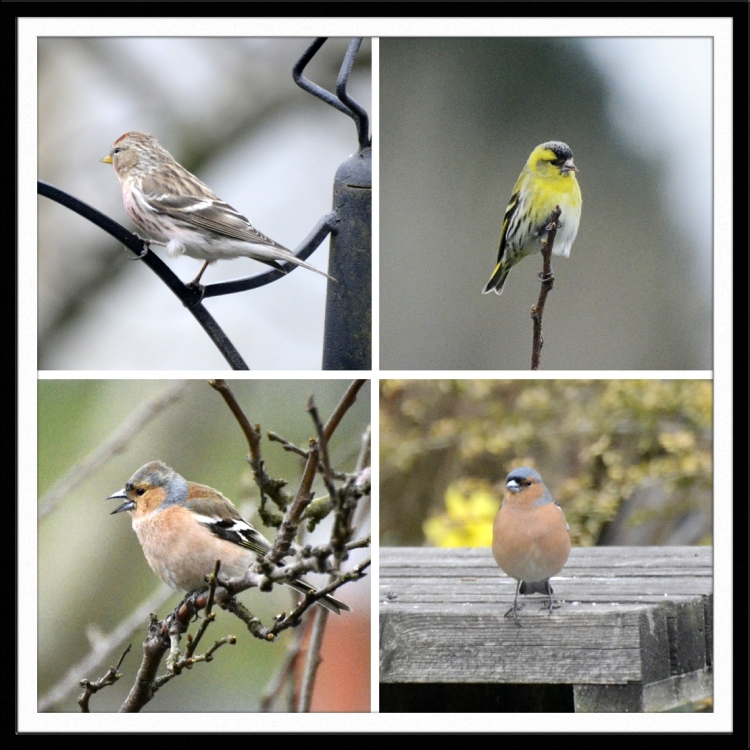 Although there was one atypical visitor.

Mrs Tootlepedal was at work so I managed to find useless things to do until she returned though I did manage to mow the middle lawn in between footling about.

Mrs Tootlepedal has made the decision to plant everything she can before we go away and cover it as well as she can in case of frosts.  After lunch, I helped out with planting the potatoes.  When we had finished, she gave me three to plant in a bag rather than in the veg bed.  I tried this last year and didn’t get good results so this will be the last time of trying unless the crop is good.  The purpose is to try and grow slug free potatoes which is hard outside in our damp climate.

I then put the belt bike in the car and took it down to Longtown to try to get one or two suspicious creaks and groans sorted before I take it away on Thursday.  As I backed out of the drive, I nearly ran over a passer by.  He turned out to be looking for a lift to Longtown.  You expect Google to know all about you but it is worrying when even your neighbours know where you are going before you do.

Having delivered the bike, I drove back to the Kilngreen and took the camera out of the car to look for dippers.  There were none.

There was a pair of goosanders but they paddled away up the Ewes water as soon as I appeared.

I walked across the Castleholm to see if there was any sign of the nuthatches near the Jubilee Bridge.  I saw a blue tit singing away but within moments a nuthatch appeared and frightened it off.

I think they both have eyes on the same hole in a tree for a nest.

I left them to it and walked up the Esk to find a spot to sit and watch the water flow by.  On my way, I passed the Duchess’ Bridge, catching a ray of sunshine ….

This was the spot that I found to sit…

…and here is the water going by.

There were birds flitting across the river but they were too quick and too far away for me to catch.  This wild flower was stiller and nearer.

I did notice two drakes swimming stealthily up the far side of the river.  To my surprise, when they reached a small promontory, instead of swimming round it, they left the water and walked overland before rejoining the water.

All became clear a moment later when there was an almighty row as they attacked a duck lying in the undergrowth a few yards up the bank.

I made an excuse and left the scene and continued my walk.  My target this time was a second potential nuthatch nest.  When I reached the tree, a nuthatch on a branch caught my attention by singing loudly and urgently.

It was only when I turned to look at the nest site that I saw whom it was talking to. 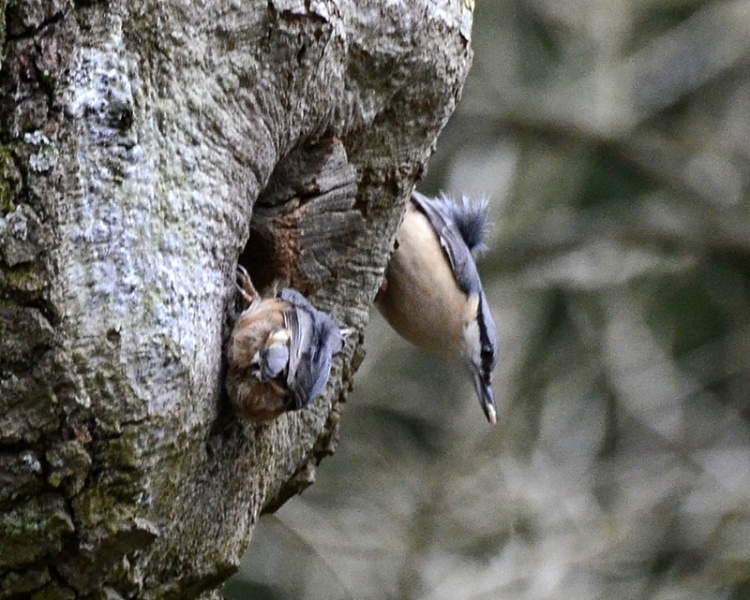 I think that they are preparing the entrance to the nest.  They flew off and as I didn’t want to interrupt their work, I walked on back to the Kilngreen.  I met a rider leading a second horse, always an impressive sight to see for someone like myself who has a good deal of difficulty controlling one horse.

The goosanders (or a pair who looked very like them) had made their way to the meeting of the waters…. 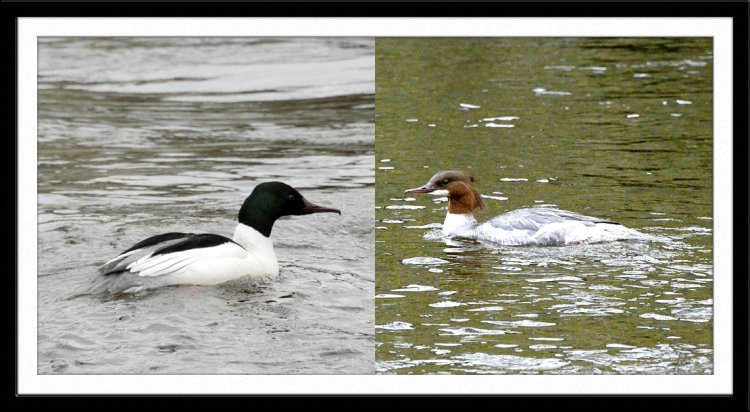 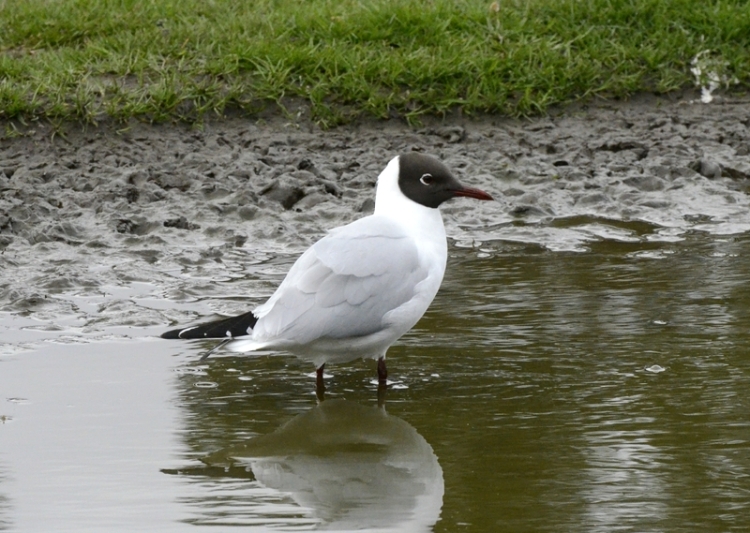 …and a heron running towards a man who regularly feeds the birds on the Kilngreen. 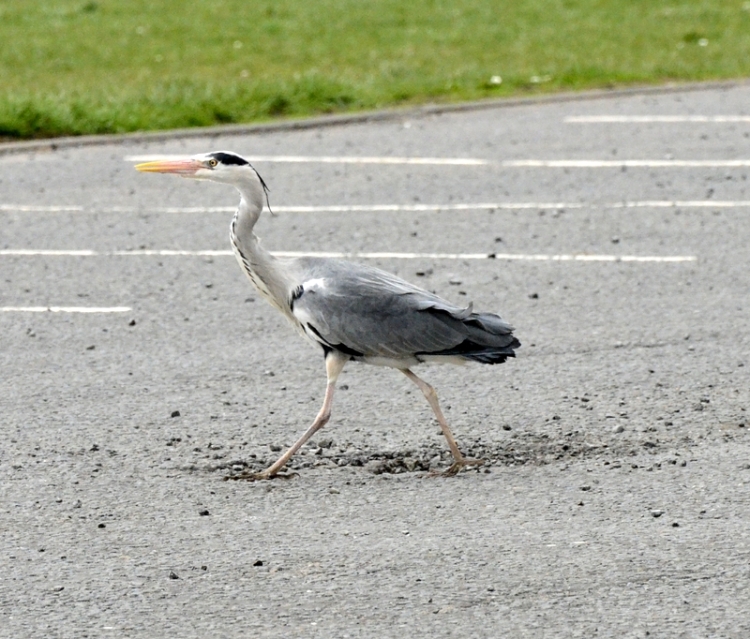 When I got home, Mrs Tootlepedal was still slaving in the vegetable garden.  This time she was sowing beans.

In the evening, I went with Susan to play recorders in Carlisle and I had my second satisfying evening of music making in a row.  There were good biscuits too.

A second day running with a pedal and a tootle – throw in the nuthatches and it would be hard to have a better day.

The flying bird of the day is a two headed duck at the Kilngreen. 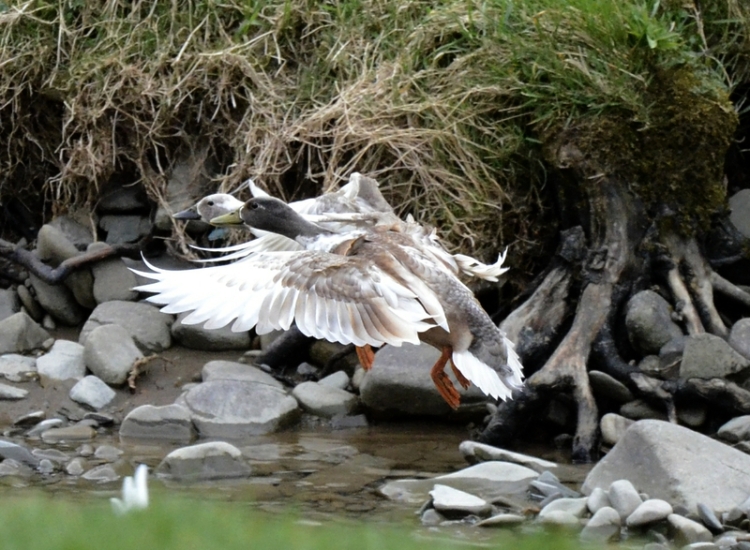 15 thoughts on “A pedal, a waddle and a tootle”