Today’s picture is a fine view from the Lake District enjoyed by my recorder playing friend Jenny recently while on a walk there.  It shows Buttermere. 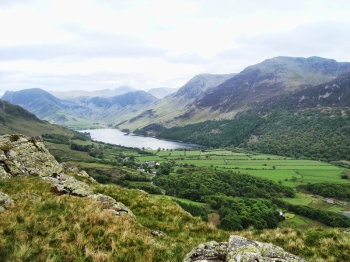 We had another dry, windless, sunny day today.  I didn’t use it for cycling purposes because it was a bad day for my asthma and even without that, I was rather tired.  I think this was probably because I didn’t eat properly straight after yesterday’s ride.   Now that I am back doing some slightly longer rides, I must take a bit more trouble over refuelling.  As proper cyclists know, you are supposed to take in protein as soon as possible after a ride to help your muscles recover.  I forgot that yesterday.

My 70-300mm lens has become unusable  and so a trip take nuthatch and gull pictures was ruled out.

As a result of all this, I had a rather dull day.  The garden was looking good in the sunshine and I took a few pictures there.

I like the flowers individually but I prefer this more restrained combination.

The pond is full of silent frogs.  There are at least six and possibly seven in this shot. 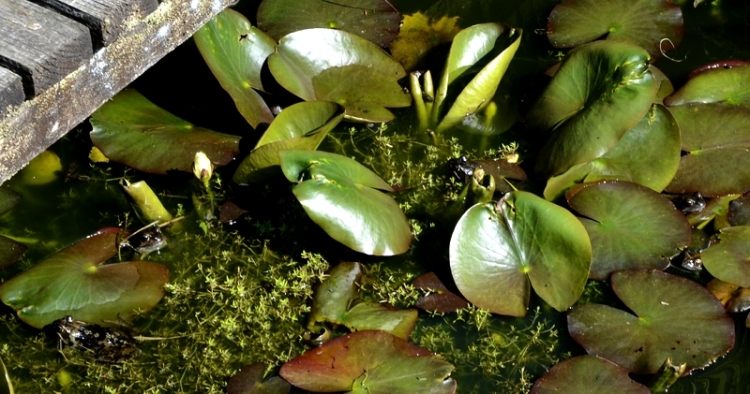 A small Japanese azalea has come out in the back border….

…looking neat and restrained compared with other larger flowered varieties.

We were visited by a homing pigeon which like me was feeling the need for a rest.

Luckily today’s competition crossword was rather hard so I was able to spend quite a lot of time sitting down and scratching my head.   When the clues got too hard, I went out and mowed the grass round the greenhouse and strimmed both lawns.  This all took me to lunchtime.  After lunch, I started a sourdough loaf off and whileI was waiting for the various stages of the kneading, I was able to pop out and look at flowers again.

There are even hints of a flower to come on one of my pet fuschias but it is too soon for a picture.

I like these dark blue aquilegias which uncharacteristically do not have dropping flowers.

I only took one picture of our regular avian guests.

Once I had finished kneading the sourdough loaf, I set off in the car to do some necessary shopping.  I rather look down my nose at the need for air conditioning in cars in our temperate climate but I could have done with a cooling system in our hot tin box today.  Mrs Tootlepedal told me that our heat sensor outside the kitchen window which was accidentally exposed to the sunlight was showing 39° C which is far too hot for me.  I stopped first in Langholm High Street and laid out substantial funds on buying more bird food and coffee.  Still, the bird food should last a bit longer than it did in the cold weather.

I went on to Longtown, where I visited Levi’s bike shop and bought some energy gels and recovery bars.  Levi told me that one of the energy gels is described as having Bakewell Tart flavour.  I thought that he was joking but when I looked, I found that it was true.  I can’t wait to try it.

Next I went into the centre of Carlisle to visit a camera shop.  I sent my zoom lens off to the lens doctor and while I  was there I arranged to trade in two lenses and a teleconverter for a much high quality 70-200mm lens and a 2x teleconverter which will work properly with it.  I am just hoping that the zoom lens service won’t cost more than the trade in price which I have agreed!  Needless to say, there will be a financial adjustment as well as the trade in to meet the price of the new kit.  The manufacturers spend a lot of time ensuring that you always need a rather more expensive piece of kit than the stuff that they sold you as so state of the art last year.

I have researched this pretty thoroughly and I hope that I have made a wise decision.  Time will tell.  It will be a fortnight before everything is completed so bird photos will be few and far between meanwhile. (Dropscone at least will be pleased by that.)

My next stop was a stationer, where on impulse I purchased two folding chairs to replace our plastic garden chairs. These like me have been defeated by time and are falling to bits.  The new chairs may also be useful on photographic outings.  They were extremely cheap and were described as ‘festival chairs’.  This may well be the nearest I ever get to an outdoor music festival.  I was really there to replenish my printer paper stock.

My next stop was a huge warehouse where I bought some more photo frames for our forthcoming exhibition.  I was melting by this time and was grateful for the air conditioning in Sainsbury’s which was my final stop of the trip.

After a delicious tea cooked by Mrs Tootlepedal, I sat on the lawn on one of my new chairs in the cool of the evening  and tried to take some bird pictures with a lens that will soon disappear.

I did just catch a flying siskin today but not very clearly.

18 thoughts on “I shopped until I drooped”