Today’s picture, sent to me by my sister Mary, shows the celebrated rose garden in Regent’s Park, London. 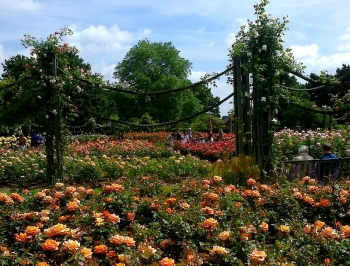 After a spell when the winds have not been too bad, today saw a return of the 30  mph gusts.  I wanted to do ten miles to bring my monthly total up to 400 miles which is my target and I chose a short out and back, starting by pedalling gently uphill and into the wind.   The outward five miles took me a painful twenty nine minutes.  The return journey took me thirteen.  On average, I have pedalled for fractionally under an hour a day this month.

Mrs Tootlepedal went off to sing in the church choir and I stayed in to wave goodbye to our cycling B&B guest who was looking at the branches of our walnut tree thrashing about in the wind with rather a jaundiced eye.  Who could blame him.

I did a little housekeeping and started off a sourdough loaf and then wandered out into the garden.  The wind made it hard to take flower pictures but I had to record two new appearances.

I have often complained that lupins start to die at the bottom before they have finished flowering at the top but this year, perhaps because of the late start, they are in flower all the way up at the same time. 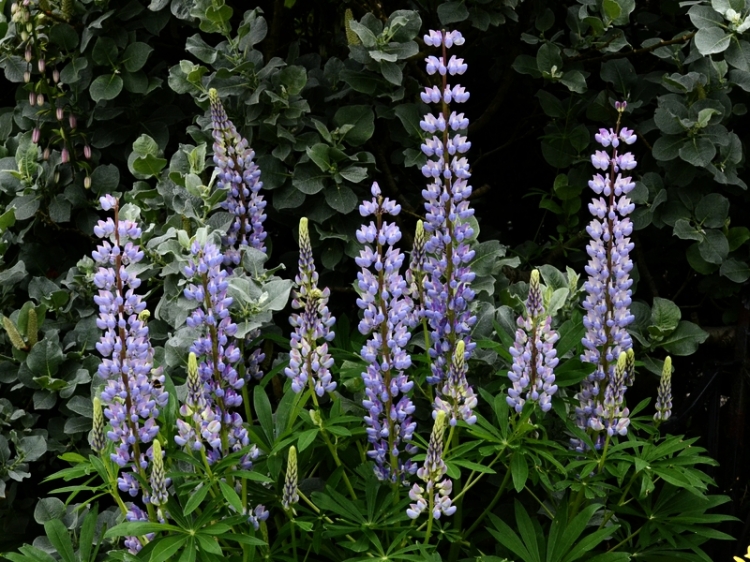 The bees appreciate this, I am sure. 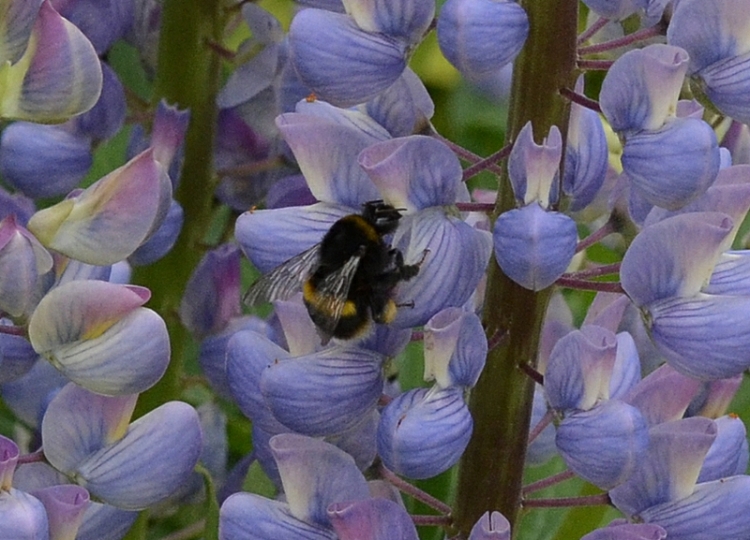 They are also enjoying the lamium flowers.

One of the spireas has sent a shoot out pointing up to the sky instead of drooping gracefully as usual.  It is very striking.

And I couldn’t resist yet another cornflower shot.

On the feeder, a redpoll made one of its infrequent appearances.

When Mrs Tootlepedal returned, we had a cup of coffee and then I went off to fill the moorland feeders.  I sat for a while watching the woodpeckers as usual… 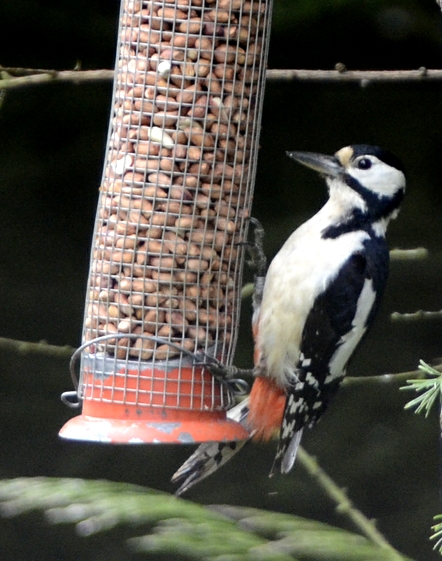 …but there was no sing of the jay which must have travelled on.   There were plenty of pheasants about which came in two modes – fairly smooth… 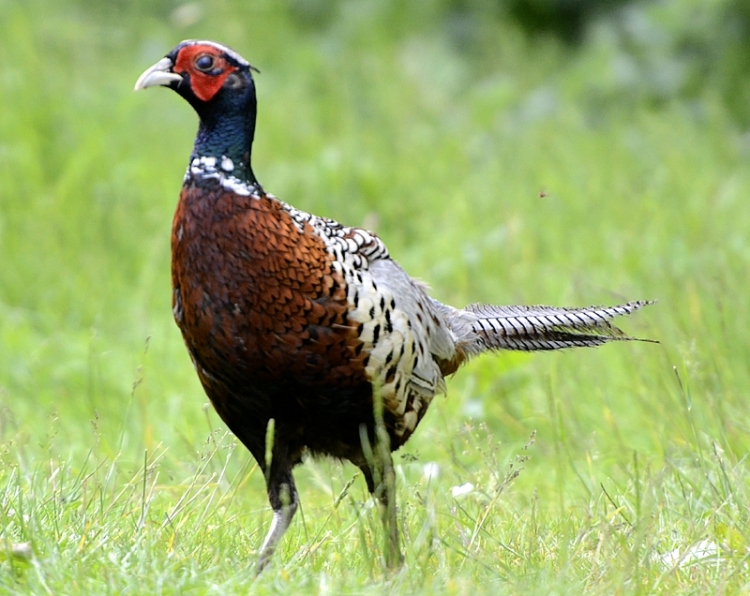 We had more B&B guests who arrived early as they were going to an afternoon (and evening) gathering and when they had gone off, Mrs Tootlepedal also went off.  She was going to meet our daughter Annie, who was arriving in Carlisle by train.

I took a couple of bird feeder shots.

We have had a lot of wood pigeons in the garden recently.  Here one perches in the plum tree looking oddly out of scale beside two of our more usual plum tree residents. 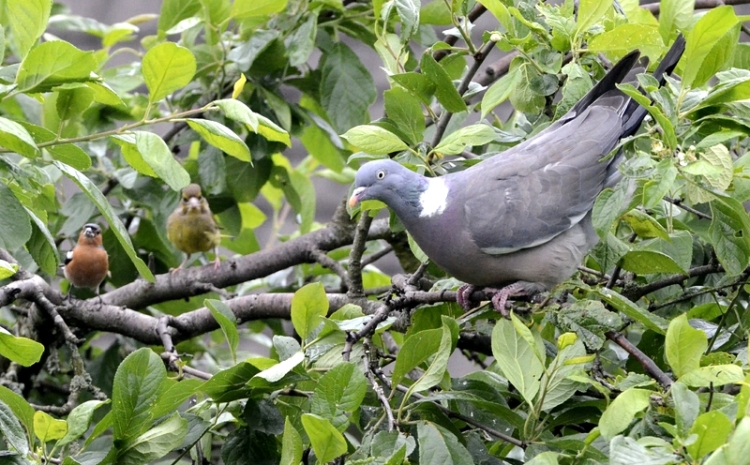 I had hoped to go out to take some photos but I was overcome by tiredness and sat down to watch the telly instead.  Luckily, I had a very interesting stage of the Tour de France to keep me occupied.  It is always fun when the bunch mistime their finish sprint and in this case they arrived a  single but vital  second behind the jubilant stage winner.

Annie arrived safely but unfortunately brought some miserable weather with her. 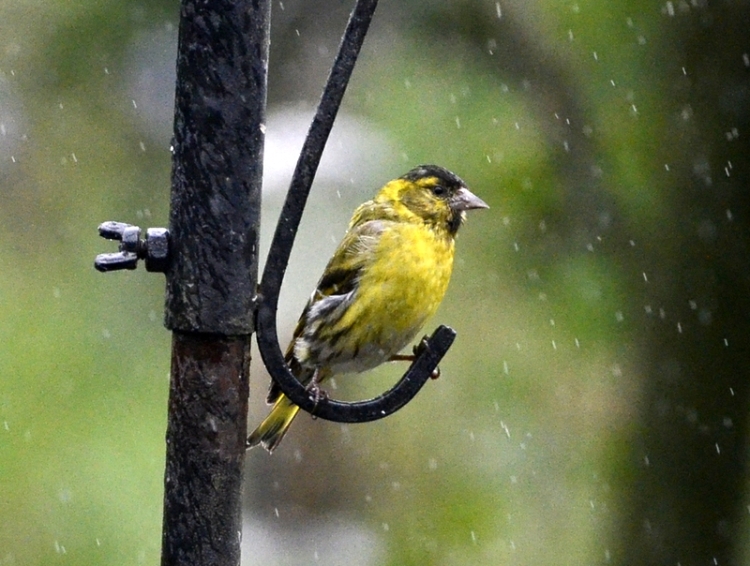 We cheered ourselves up with a little recorder duet.  Those with strong nerves can click on the link to hear a brief extract.

(I may have enhanced the reverb a little but it is hard to record recorders.)

Mrs Tootlepedal laid on an excellent evening meal and we caught up with Annie’s news.  While we were eating our tea, the sourdough loaf was cooking.  I had used my new baneton in the preparation and things looked promising when the loaf came out but as you can see, I haven’t quite mastered the loaf beautiful yet.

Uneven rising is a problem. It could be uneven heat in the oven, not cutting the top of the loaf before baking, not allowing enough time for the second rising or any combination of these or several other reasons.  Luckily, the appearance doesn’t affect the taste at all.

The flying bird of the day is not a triumph of the photographer’s art but it was a gloomy day.

22 thoughts on “A welcome visitor”