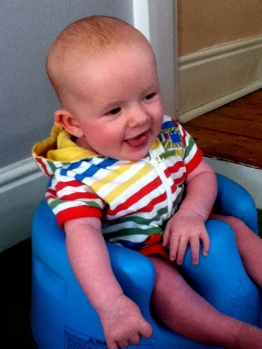 It was a perfect summer day for sitting about outside not doing too much and this was very fortunate as this was exactly our plan.  After a quick visit to the local monthly producers’ market for fish and cheese, I had a moment to watch some very low flying swifts.  They seem to be nesting under the eaves of my neighbour’s house but I couldn’t take a picture to prove it and had to make do with this one.

I had received a suggestion from Mel, a fellow local photographer, that Sandy and I might enjoy a visit to a local horse trials.  Sandy had thought that this was a good idea and Mrs Tootlepedal fancied an outing so when he arrived, we piled into the car and set off for the intriguingly named Nord Vue Farm and equestrian centre at Armathwaite, just south of Carlisle where the event was to take place.

(Warning: there are far too many photos in this post. Blame Mel.)

At the top level, these trials are held over three days but for a local event like the one we were attending, all three events, dressage, show jumping and cross country, are condensed into one day.

There were about 300 entries for the various events which were at graded levels from novice upwards so there was plenty of action to watch.

Sandy and I were keen to try to develop some action horse photography skills.  We started by looking at the show jumping. 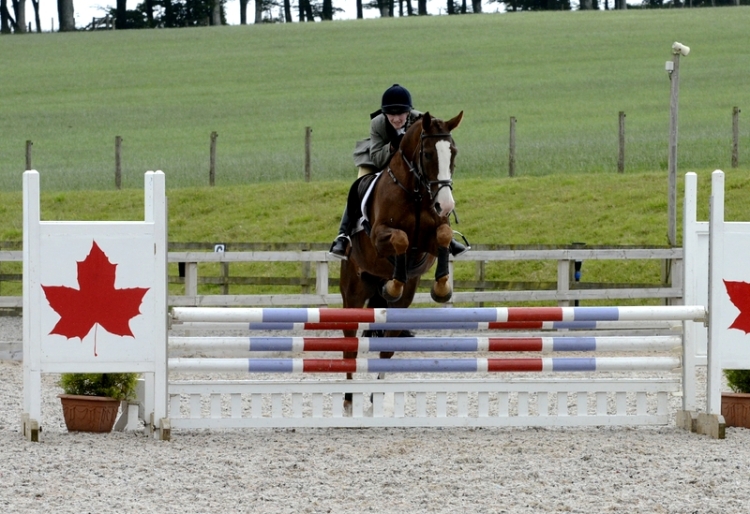 Someone had told me to make sure I got my shot in early or I would only catch the passing tail of a horse.  I took this advice to heart but the result was that all my first shots were taken too quickly and the horses still had their back legs on the ground.

The fact that this was an intermediate class and the jumps were quite small didn’t help.  If the fences are bigger, you have more time to catch the horses in the air.

We moved to the other side of the same obstacle and I caught my first horse in flight. 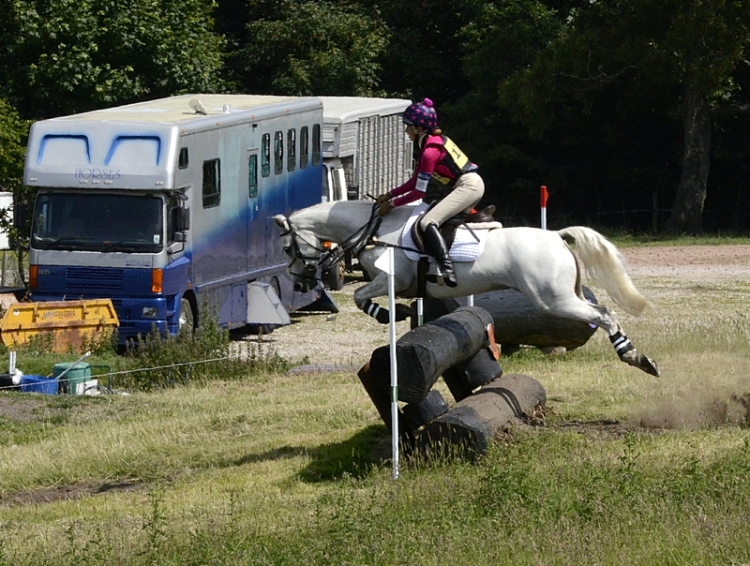 In the background you can see a mobile palace that had brought a horse and rider to the event.  This is probably not a sport for the very hard up.

The going was good on the cross country course and although we saw a few refusals, there were no falls to alarm us.  Horses and riders concentrated hard. 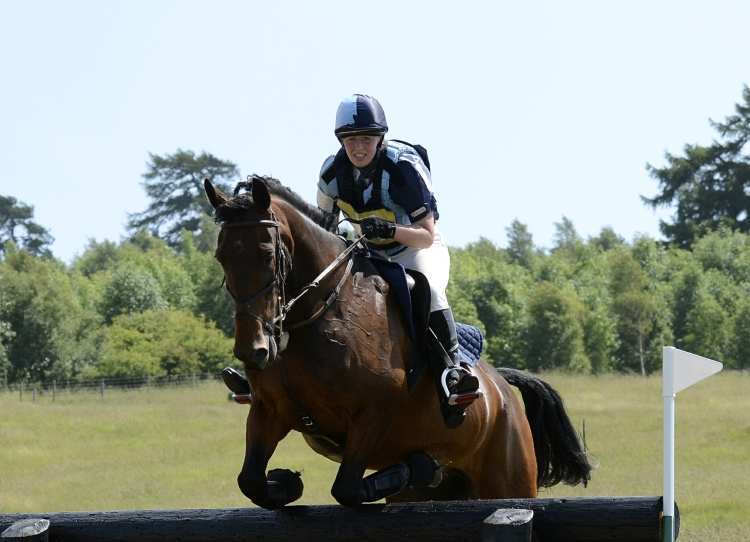 Mind you, I would concentrate pretty hard if I was in danger if banging my knees on a big log of wood like that.

This was a contestant clearing the final jump of the course in good style. 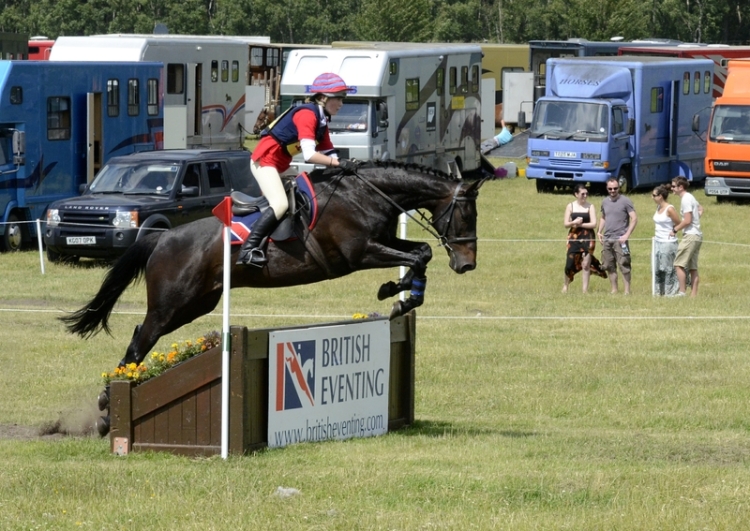 Mel arrived and we met her for lunch.  She had an assignment for a horsey magazine and needed to photograph every contestant in the main event of the day to make sure she had a picture of the eventual winner so we went with her back onto the course to find a good vantage point.  On our way we passed the water hazard.  At this level, riders don’t have to jump a fence and land in the water.  They just splash through it and jump out of it at the far end.. 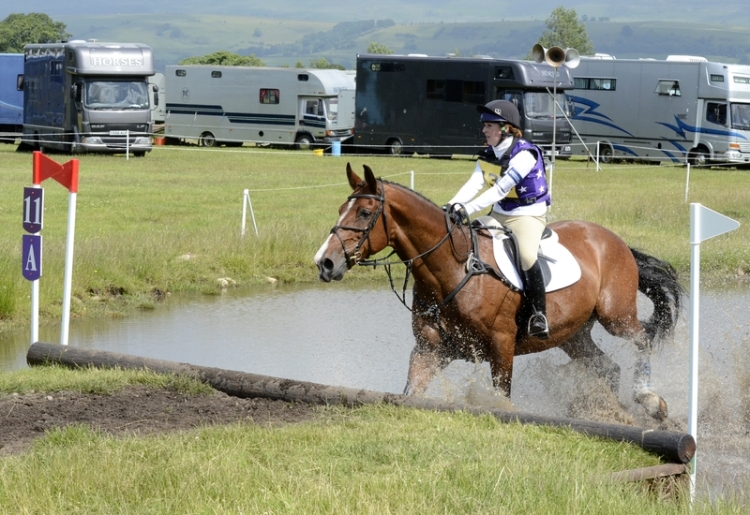 We followed Mel to her chosen spot.

It was at the highest point of the course and we had a good view over the whole farm and the Eden valley beyond.

She had chosen a good fence for us to focus on.

I went to have a look at the next obstacle, a big drop fence on the way down the hill. 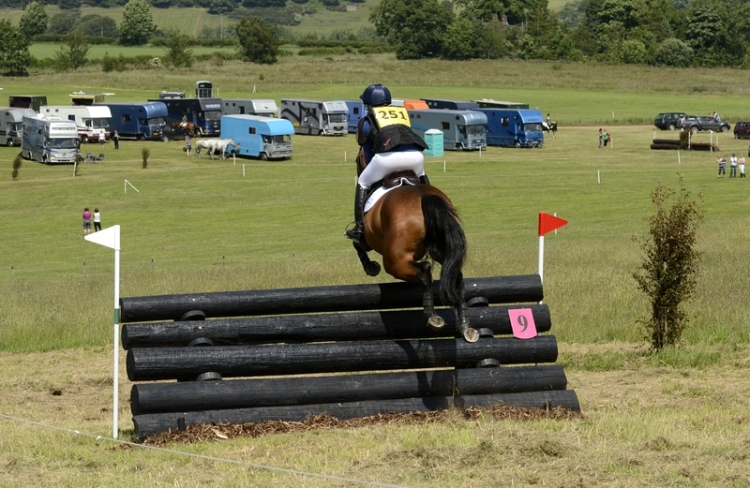 It looked even more impressive from below.

The riders were an undistinguished lot for the most part but the horses were magnificent. 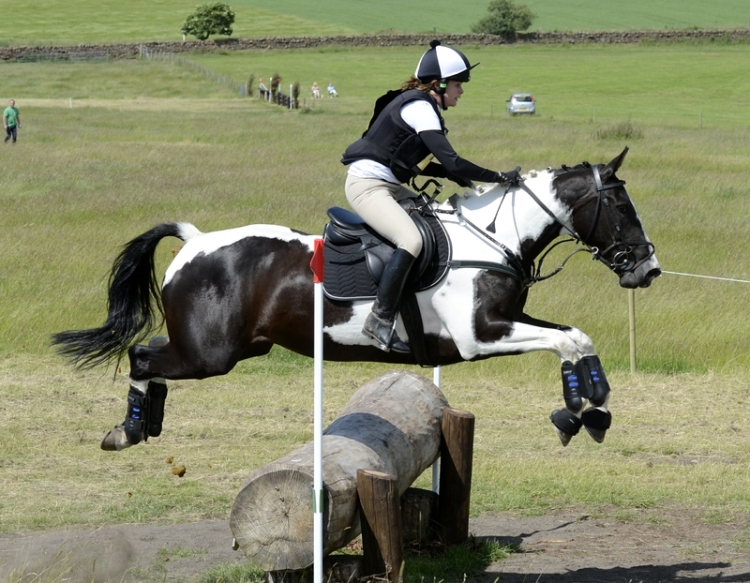 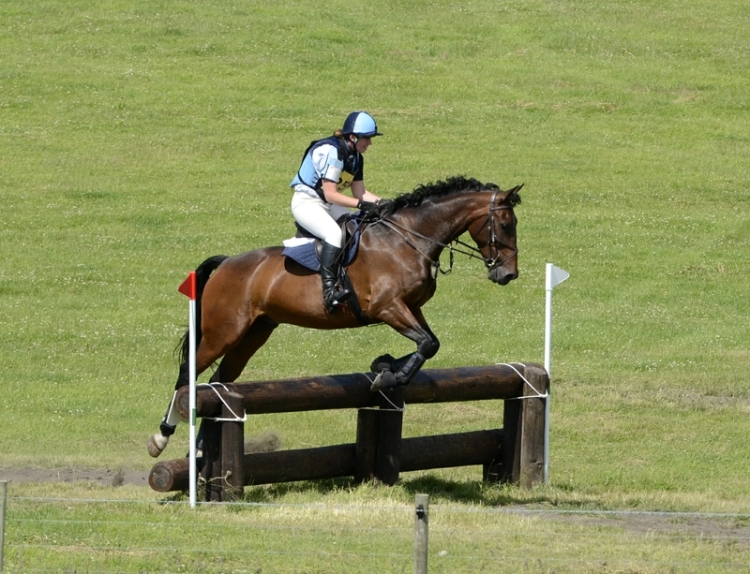 While we were snapping away, Mrs Tootlepedal was taking in the scene and chatting to a rider from Langholm who was in one of the classes.  Sandy and I walked along to where the course ran through a wood for a short time. 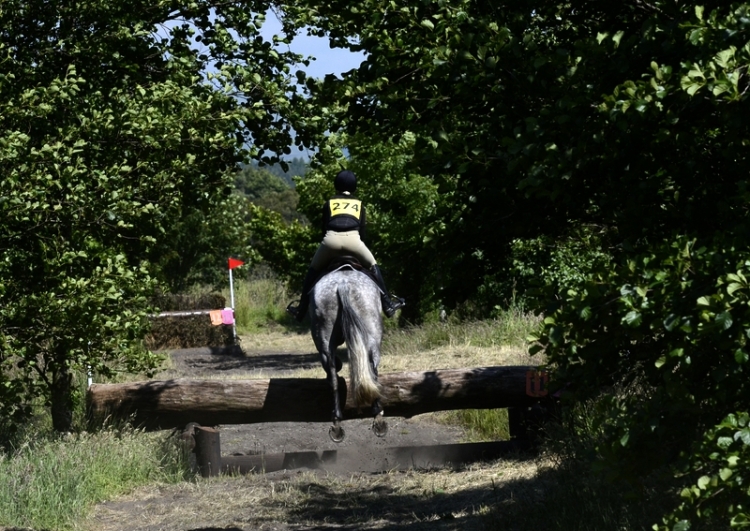 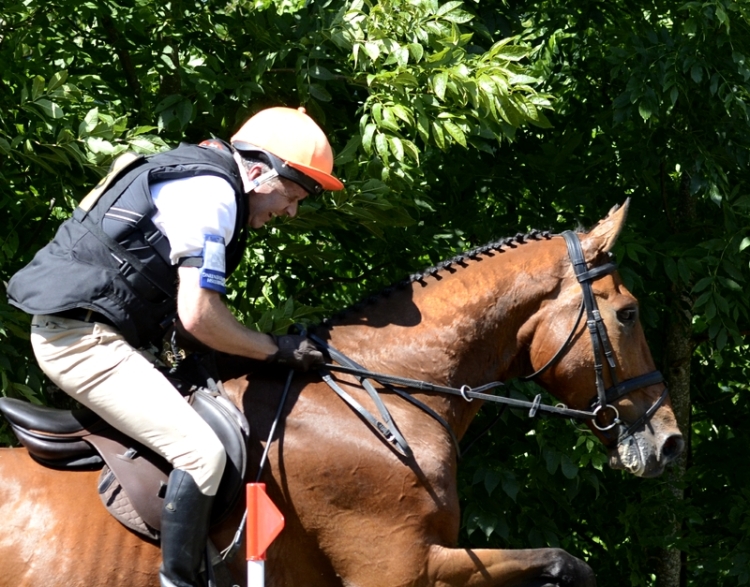 It was pleasant to stand in the shade for a while…. 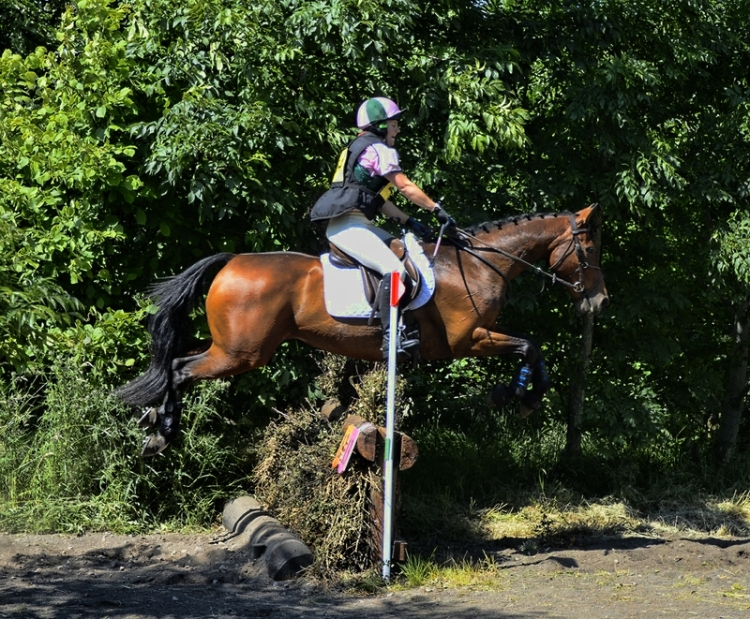 …and watch the equine athletes doing their stuff.

We walked on to where the obstacle wasn’t a fence but a substantial drop instead. 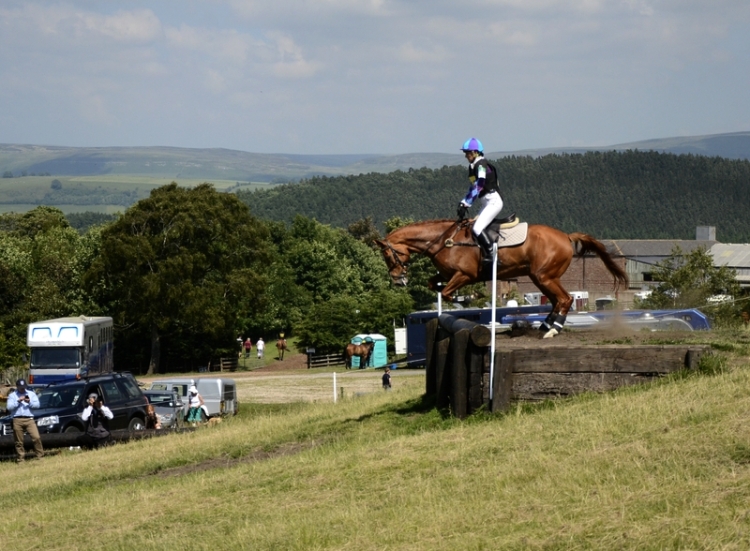 This gave us the best opportunities of the day for aerial photography. 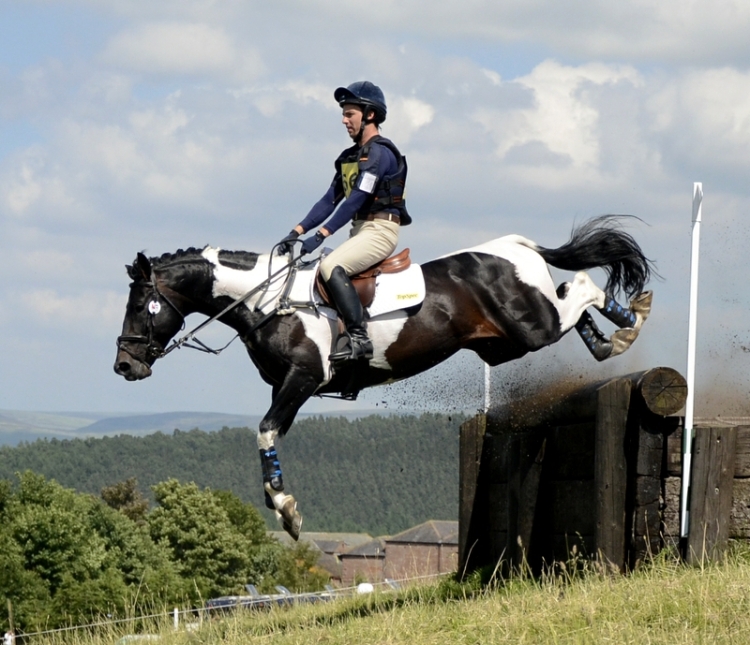 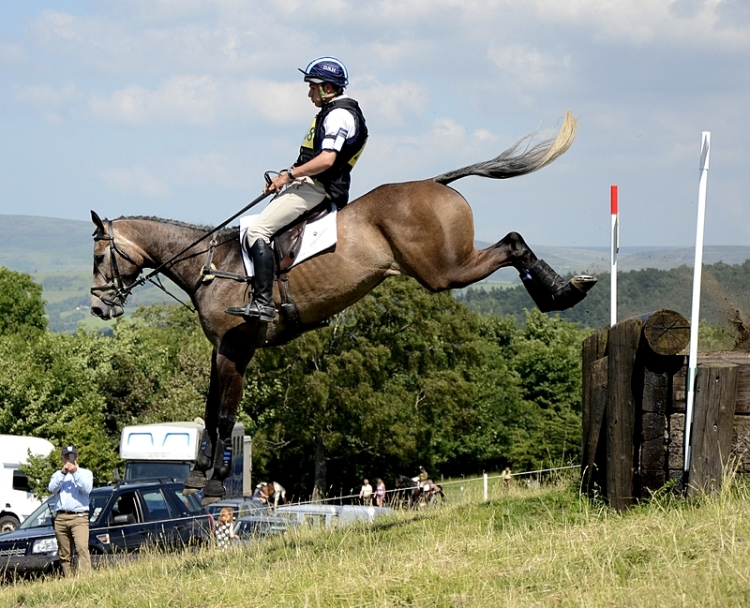 As well as jumping the obstacles, the horses have to complete the course within time limits which meant some quite vigorous galloping for the higher class contestants. 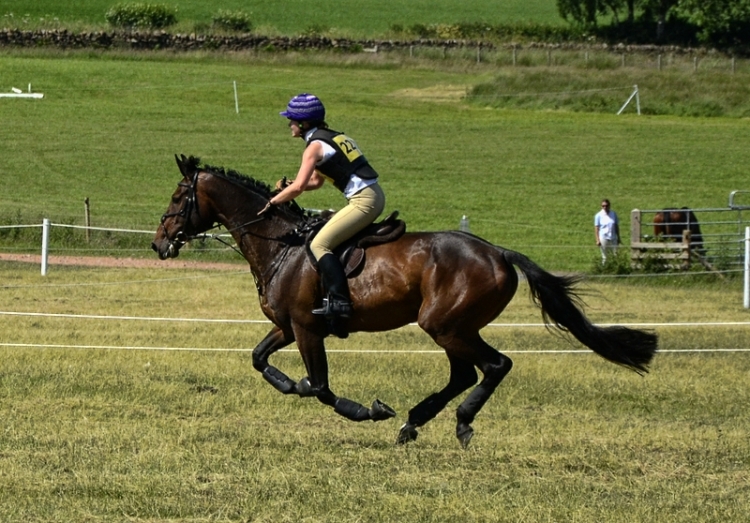 It had been a perfect day for horse watching, with a crisp breeze keeping temperatures very reasonable on a lovely sunny afternoon but as tea time drew near, we left Mel to it and drove home, crossing the River Eden on our way.

The drive home along the Eden Valley and over the hill to Brampton would have been worth an outing in itself for the lovely views but we had taken enough pictures by this time..

When we arrived home, we had missed the women’s final at Wimbledon but were able to catch the final climb of the day in the Tour de France by using the catch up programme on the TV.  Sandy went home for a snooze but I expect you will be able to see his take on our day on his blog soon.

After a rest, Mrs Tootlepedal went out into the garden to plant out some of the plants she has raised from seed in the greenhouse and which should have been in the ground a week or so ago.  I joined her and mowed the middle lawn, sieved a bucket of compost (which she promptly used for her planting out activities) and picked a good bowl of strawberries for our evening meal.

While I was out, I took a picture of one of the white roses which are enjoying the sun as much as we are. 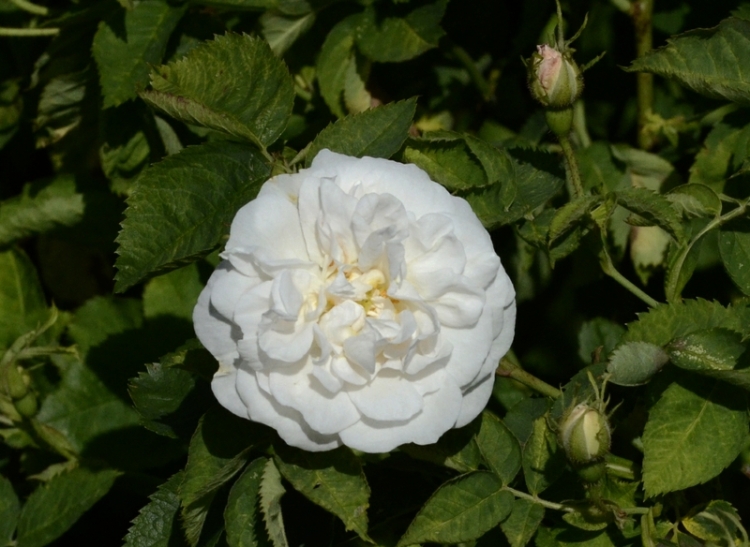 And checked on the siskins.

I am very grateful to Mel for suggesting the visit to the horse trials and I will keep an eye out for another opportunity.

The flying bird of the day is a siskin in the low evening sunshine. 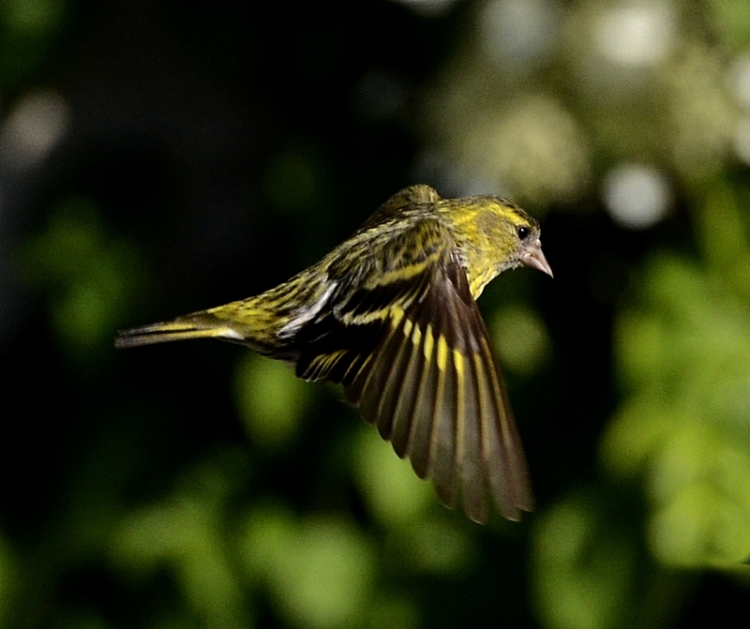