The picture of the day shows Langholm’s 2013 cornet Alistair Cavers. 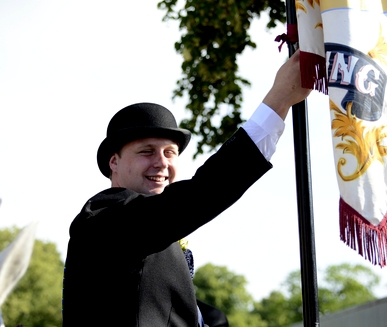 The last Friday in July by tradition sees the celebration of the Langholm Common Riding when the town’s standard is carried round the town and the common lands on the hill by a mounted horseman and his followers.  Although the ceremony has lost its original purpose and is largely symbolic, it has a place in the hearts of most townsfolk and is a magnet for visitors from the surrounding areas.

The great day starts at 5 am with a march round the town by the Flute Band followed by a hound trail on the hill.  Although I played in the flute band for thirty years, this is now too early for me and I slept through the beating of the big drum as they passed by.  Mrs Tootlepedal and I went to our usual spot to greet the Town Band which leads the procession of riders through the streets.

It was followed by a good number of riders.

To avoid problems, the main roads through the town are closed for the morning and the townspeople take possession of the streets which is one of the best things about the day. 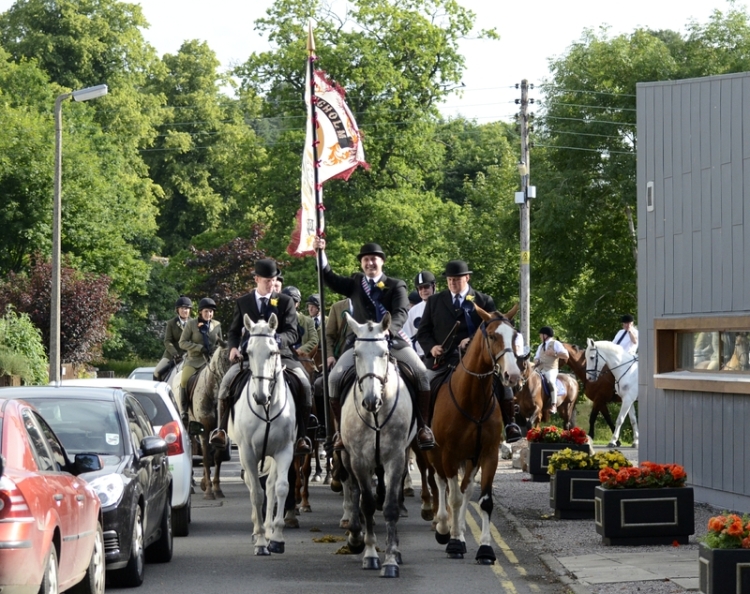 …the procession heads back into the High Street and in a while, the crowds listen to the first crying of the Langholm Fair and the cornet leads the riders in a gallop up the Kirkwynd and onto the hill.  I left them to this and cycled up the road to the White Yett to watch for the riders coming to the top of the hill.   After the gallop up the Kirkwynd, the procession disappears from my view normally so this year, I thought that I would find out what it is that they actually do up there.

It was a beautiful day up on the hill, looking along the Ewes valley, with a fresh wind keeping the clouds moving so that we had frequent sunny spells.

I didn’t have long to wait before the cornet appeared…. 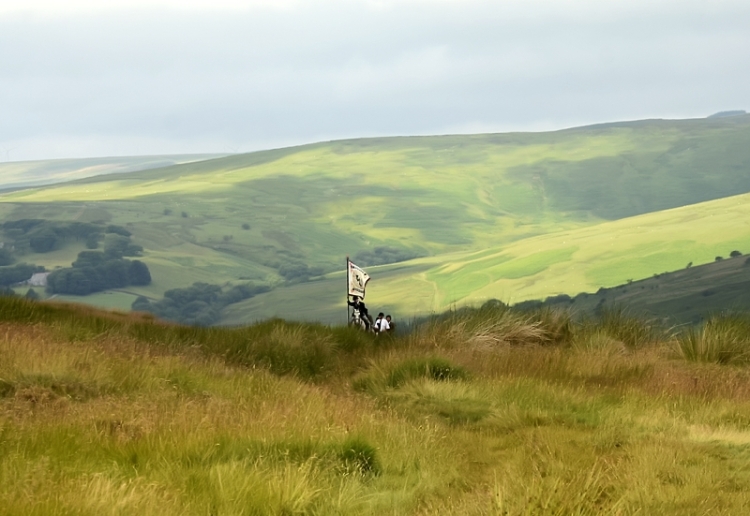 …and came through the gate onto the common lands.

Once there, he led the procession to  succession of cairns. first going downhill…

…and then back up again….

…and finally round the shoulder of the hill…

…before heading to their final destination….

…at the Castle Craigs.

Here the cornet relinquishes the standard and it is attached to the cairn while the train of riders catches up.

When all the riders are assembled, the Castle Craigs fair crier mounts the cairn and cries the fair.

This is to give notice that there is a muckle Fair to be hadden in the muckle Toun o’ the Langholm on the 15th day of July, auld style, upon his Grace the Duke of Buccleuch’s Merk Lands, for the space of eight days and upwards; and a’ land-loupers, and dub-scoupers, and gae-by-the-gate swingers, that come to breed hurdums or durdums, huliments or buliments, hagglements or bragglements, or to molest this public Fair,they shall be ta’en by order of the Bailey and Toun Cooncil, and their lugs be nailed to the tron wi’ a twalpenny nail, and they shall sit doun on their bare knees and pray seven times for the King and thrice for the Muckle Laird o’ Ralton, and pay a groat tae me, Jamie Ferguson, Baillie o’ the aforesaid Manor, and I’ll away hame and hae a Bannock and a saut herring tae ma denner by way o’ auld style.

When the fair had been cried, I and the other onlookers walked straight up the hill to the monument while the riders took a more circuitous route.  Going back round the hill again…

…before coming up the fence to the monument. 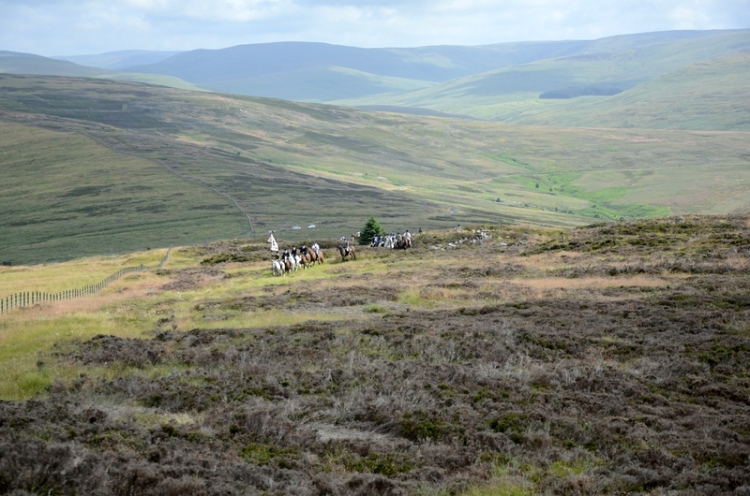 For this section of the ride, the procession is led by the cornet of 25 years ago (the ‘semi-jubilee’ cornet), in this case Andrew Jeffrey. 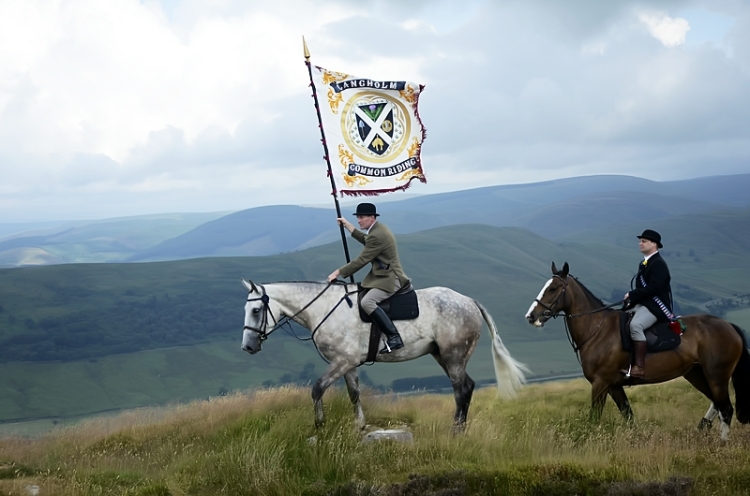 He is riding the cornet’s horse as well as carrying the standard with the cornet riding his horse behind him.

The flag is carried three times round the monument….

…before the 160 riders head back down the face of the hill to the town. 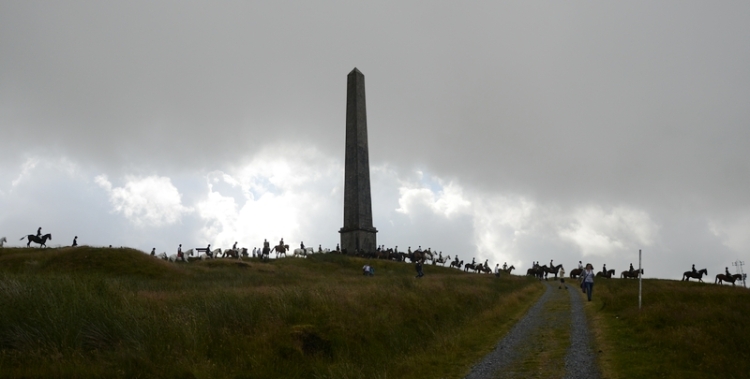 This was a part of the common riding which I had never seen before and if possible I will certainly come to watch it again.  To be on the hill with the valleys laid below me and a procession of 160 riders walking across the rough ground and through the heather against the backdrop of spacious views was quite an experience.

I left the horses to tiptoe carefully down the face of the hill and went back to my bicycle and zoomed down the road back to Langholm.

When I got home, I found my son and daughter-in-law there and we walked up to the High Street to meet the procession which had got safely back to the town.

By this time the procession has been joined by an enormous Scottish thistle…. 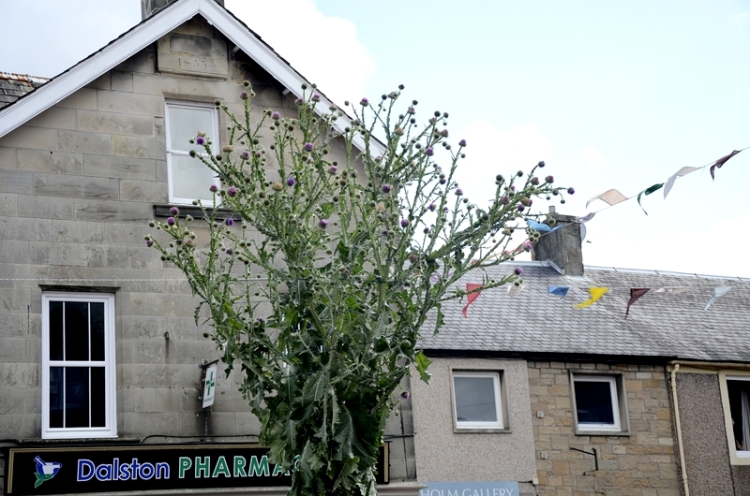 …carried by some very strong men.

After a bit of marching about behind the band, the procession comes back to the Market Place and the fair is cried again to a very large crowd of supporters.

Here the fair crier is gripping the twelve penny nail by which the ears of those who misbehave at the fair will be nailed to the tron.

Then the procession is resumed until it comes to the Kilngreen where, in front of a large crowd,  the spade carrier fords the Ewes Water… 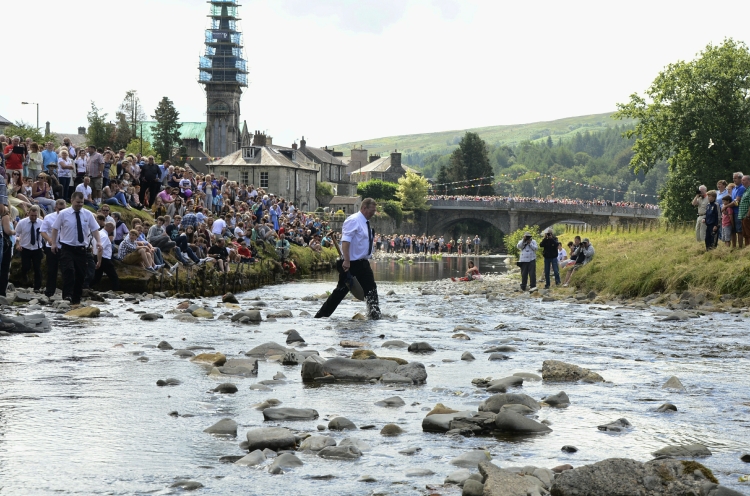 …followed by the cornet and the rest of the mounted followers.

Mrs Tootlepedal and I walked home at this point, though we did stop in Mary Street to look across the river to the Castleholm where the cornet was being led past the castle ruins to the racecourse to lead the cornet’s chase. 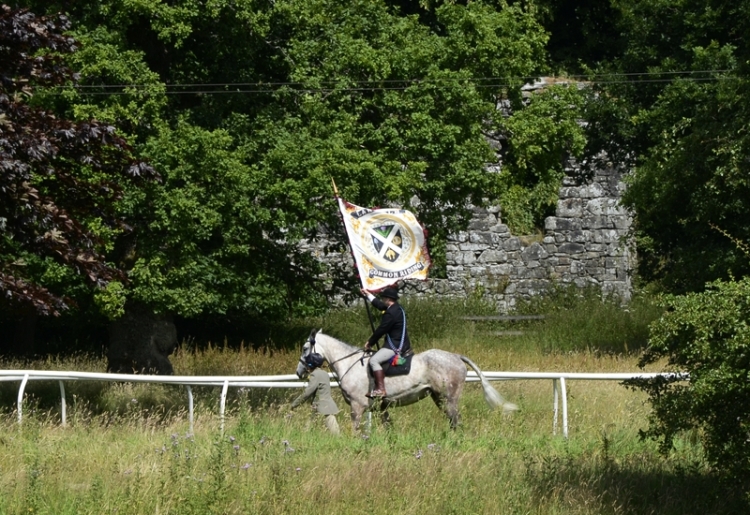 In the chase, he is given a very generous start so that there is no danger of him being overtaken and then the followers get their chance to enjoy a gallop round the racecourse.  After four hours of patently walking in line, many of the horses and riders set off at a hair raising pace…

…but we only saw one faller in the rush.

Then it was time for a well deserved lunch.  In turned out that while I had been on the back of the hill, Mrs Tootlepedal had met a friend and walked half way up the front of the hill to Whita Well so we both felt that food and a rest had been well earned.

In the afternoon, I went across to the Castleholm to have a quick look at the sports going on there.  There was horse racing…

…and foot racing, both sprinting….

…as well as wresting.

In spite of the long Johns and velvet pants (often handsomely embroidered) this is a serious event.  I watched some hotly contested bouts. 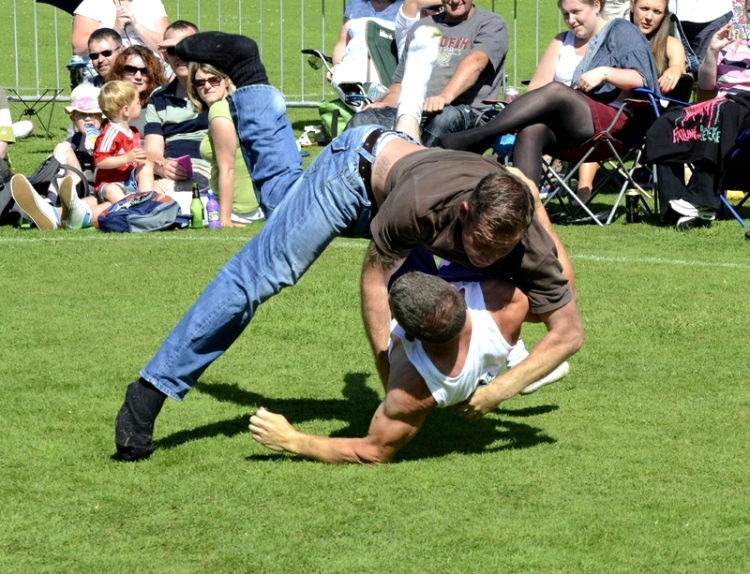 I took another picture of the second horse race of the meeting and was impressed by the concerted way that the first three runners seemed to have left the ground in unison. 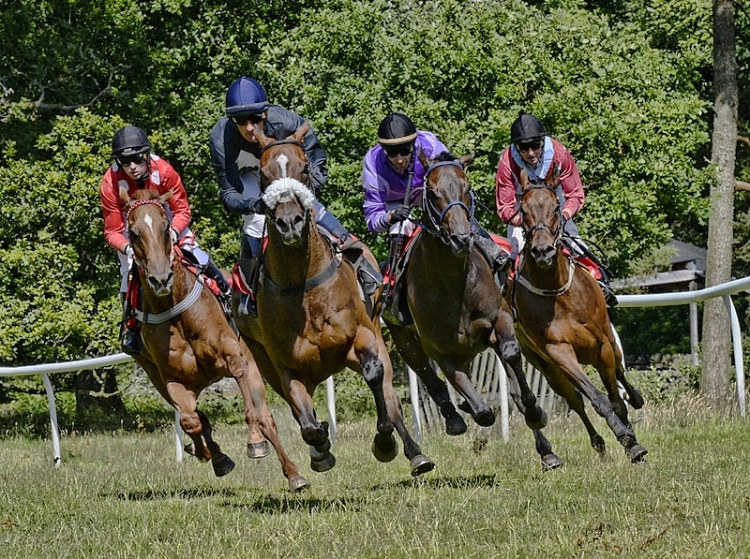 I didn’t stay too long as the afternoon had got quite hot and our visitors were leaving to go on to London.  I was glad to get back to the cool of the house and an ice cream.

I didn’t entirely neglect the garden during the day and was pleased to see that  a sunflower had come fully out to welcome our great day and the one of my favourite fuchsias had managed a flower too.

We sat peacefully round the kitchen table and did the crossword in a communal way.  My son took this rare picture of me actually thinking.

Mrs Tootlepedal took them off to catch the train in Carlisle while I looked through the many pictures of the day.  The flag gets handed back by the cornet at 9 pm after a long day but we were too tired to go up to watch.

No time or energy for a flying bird so this picture by my son of his wife also thinking about the crossword will have to do.

It may have been Langholm’s Great Day but I had a great day too.