Today’s picture, sent to me by Bruce, shows a good use for old tractors on the beach at Cromer in Norfolk.

It was the day of the Langholm Show today and in normal circumstances, we would have been there but our daughter Annie had bought tickets for us to visit a yarn exhibition in Skipton in Yorkshire and that took priority.  Other than the pleasure of meeting our daughter and going to a yarn exhibition, a major attraction of the outing was a trip on the Carlisle to Settle railway line, one of the most scenic in Britain.

We left for Carlisle straight after breakfast with high hopes of good weather and a fine day out.

The train to Skipton only consisted of two coaches and was pretty full by the time we left Carlisle.  As each station when we stopped added more to the load and as we stopped at many stations, it was bursting at the seams by the time we got to the highest point of the trip at 1100ft.  We felt happier once it was coasting down the hill into Yorkshire.

The stations on the line have been well looked after since a determined effort by rail users prevented the authorities from closing the line in the late 1980s.

It starts its run from Carlisle along the Eden valley and today there could have been no place more aptly named as the views from the train were wonderful.  Sadly, taking pictures from an aisle seat through the slightly grubby windows of a crowded train is not on so you will have to take my word for that.

I did take a picture while we were stopped at a station.

Our daughter was coming up from London and more by luck than good management her train and ours arrived at Skipton within minutes of each other.  We found that there was a old Routemaster London bus acting as a shuttle from the station to the exhibition, which was being held in the local auction mart.  The bus had been tastefully decorated to show its destination.

It was jam packed.

There were hundreds of stalls and thousands of visitors and Mrs Tootlepedal and Annie had a great time going round.  There were two very fine displays of knitted food….

…which were much easier to get at than the actual food stalls which had huge queues.  I stood in one of the queues for some time while the ladies continued their research, making judicious purchases from time to time.  They joined me as I got to the counter and we had a burger for our lunch.

The organisers had sent out a call to craft workers everywhere to provide crochet bunting and their call had been answered in spades.

As well as purveyors of all sorts of wool, the show had two stalls for providers of quality yarn.

There was wool from everywhere….

…and people knitting in the auction ring of the mart.

Altogether it was an amazing, if rather claustrophobic experience.  My favourite stall wasn’t really  yarn based as such but a lovely display of machine embroidered pictures.  Here they are with their proud maker posing in front of them. 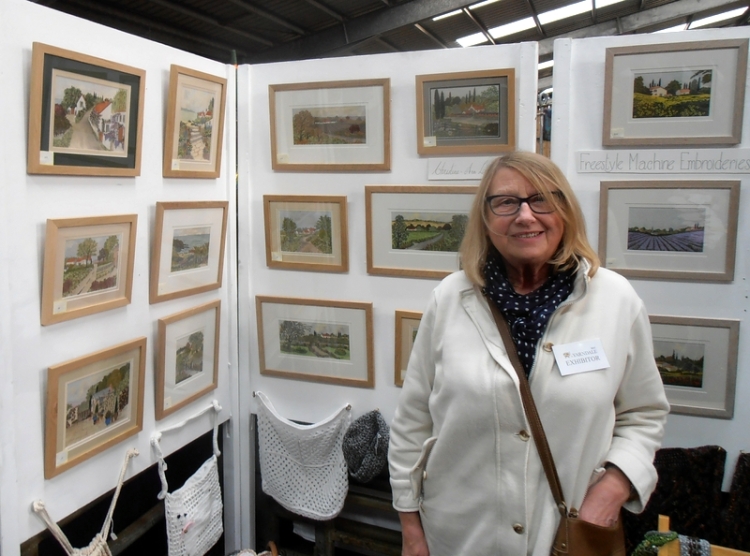 She is called Christine-Ann Lambert and has no website that I can find but if you get a chance to see her work, take it.

As Mrs Tootlepedal remarked, the exhibition was full of really enthusiastic stallholders, all very helpful and all very charming and polite and as many of the most popular yarns and fabrics in the stalls  were made from angora, alpaca and cashmere, it could well be described as the ultimate in soft selling.

We spent a couple of hours threading through the crowds and then sought fresh air and a walk back to the town.  This was a walk of about a mile and the route was marked out for us at every point by more crochet bunting, knitted lamposts….

…and even knitted bollards with additional crochet canaries.

The path led us through a delightful public park…. 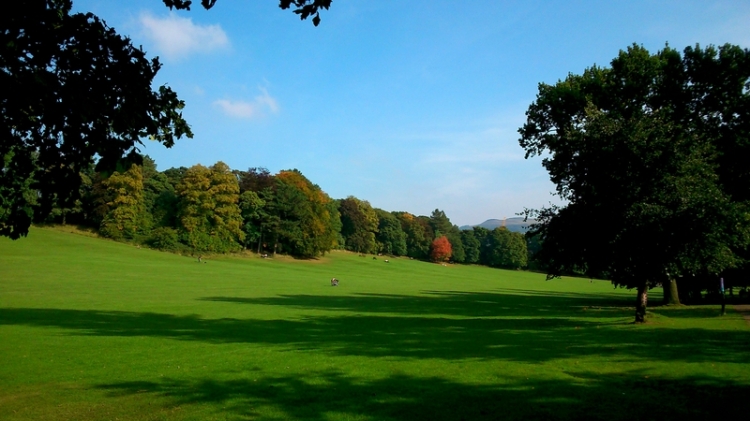 …down to the Leeds and Liverpool Canal beside the station.

…where we had a nice cup of tea.   We walked back along the canal, passing a manifestation of the ongoing Skipton puppet festival…

…and caught the train back to Carlisle in the nick of time.

This had more coaches than the outward journey and I was able to sit next to a window and take a picture or two as we pottered slowly home through the dales.

The picture above, taken from Horton-in-Ribblesdale station, shows Pen-y-ghent, one of the hills in the Three Peaks Hill race which I ran three  times when I was in my prime.  It is twenty three miles long and goes over the tops of three 2000 ft peaks. The winner in one of the years in which I competed took two and a half hours to finish the course.  I took quite a bit longer. Happy memories.

The journey from Skipton to Carlisle is not much over 80 miles but takes two hours so the passenger has plenty of time to stare out of the window and very little time to be bored as the scenery is wonderful on a sunny day like today.

This is the view from Ribblehead viaduct.  This is a popular spot for walkers as you can see from the many parked cars.

We arrived back in good time to have a fine meal at the Douglas to round off a grand day out.  A text from Sandy told us that Mrs Tootlepedal’s embroidery had not only won first prize in its class but also a cup for the best item of handwork in the show.  Well deserved in my view.  Sandy had won a first and second prize but I had to be content with a single third prize.  I shall have to try harder next time.

I just had time to catch a chaffinch after we got home and before we went for our meal. 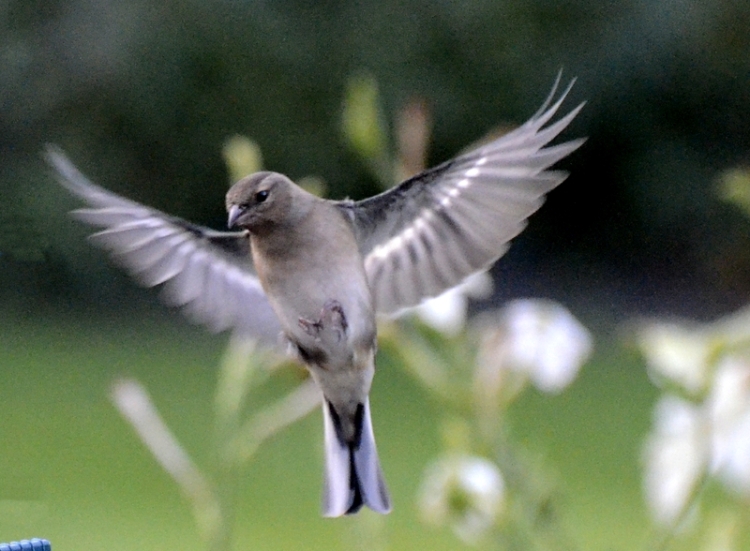