Today’s picture  (one of mine in the absence of a guest picture) shows the hills round the town putting on their autumn clothing.

I took the picture when I was out on my bike this morning.  Owing to a failure of communication, I didn’t go out with Dropscone as he was doing something else.  This turned out to be a good thing as I had a bit of a cold and felt awful and for once getting on the bike made me feel worse.  I was hoping to do quite few miles but I had to stop after twenty and even those took me a long time.  A cold and quite breezy easterly wind wasn’t helping matters and the warmth of the kitchen was very welcome.

I spent the rest of the day snivelling around the house doing little tasks that needed doing…..very slowly.

Sometimes I popped out into the garden. Mrs Tootlepedal came in to say that she had seen a butterfly and that has been so rare that I couldn’t pass up the opportunity of a picture. 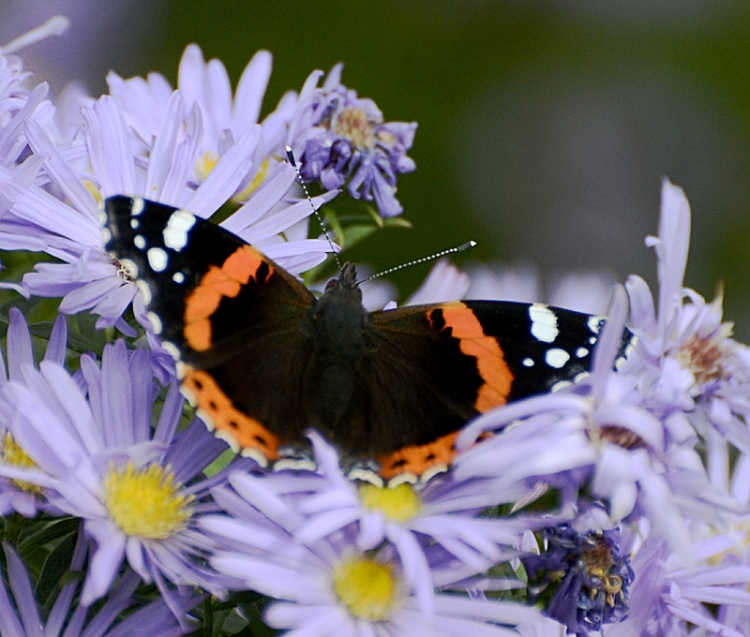 It was a red admiral again.  Probably the same one as our last visitor.

It was hanging on the the swaying Michaelmas daisies for dear life and let me get quite close.

I had managed to knock one of the perches off the feeder when I filled it and I liked the acrobatic way this little chaffinch was managing without it. 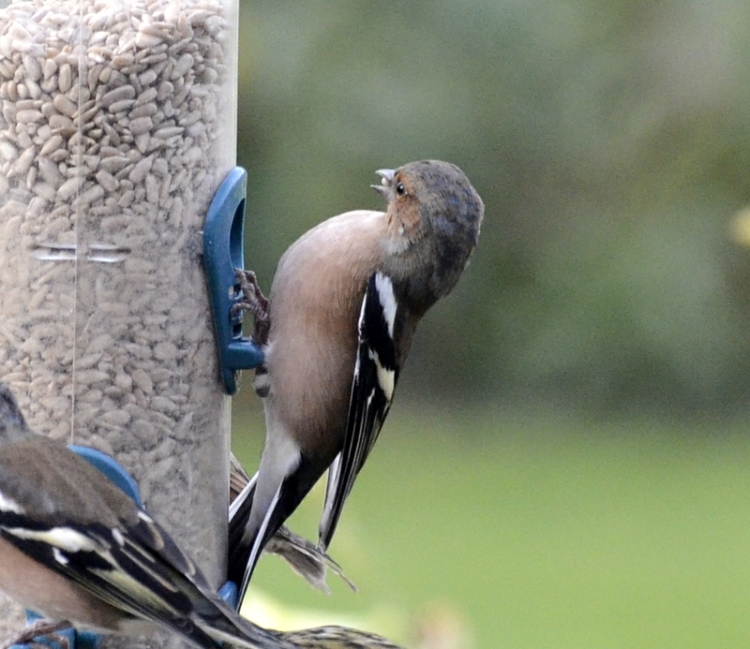 The sunflowers near the feeder are a popular perch for the chaffinches as they wait for an empty spot….

…abut this visitor was unexpectedly different.

A closer look showed that it was a robin.

I am not a bird expert but I think its rather tatty appearance means that it hasn’t finished its moult.  Here it is in anther pose. 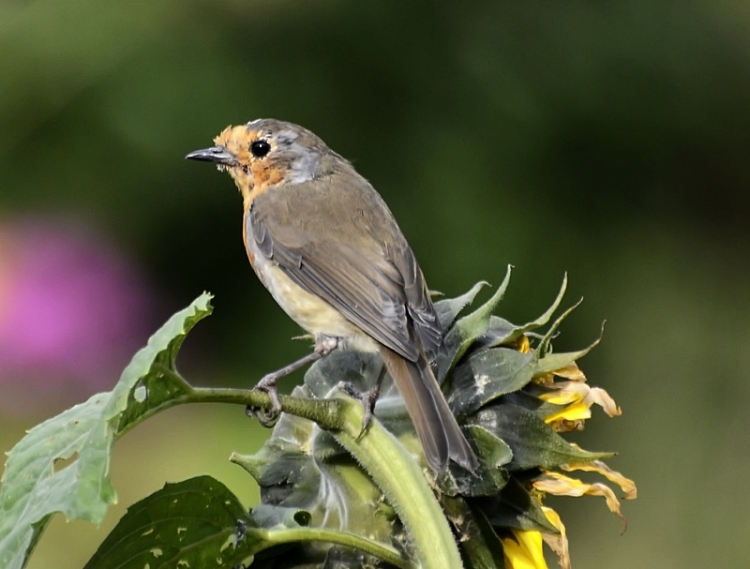 I made some nourishing lentil soup for lunch and that made me feel a bit better.

A great tit stood on the plum tree looking quite at home.

The sun came out strongly in the afternoon and I stopped work for a quick walk round the garden again.

The variegated nasturtiums were looking sensational. 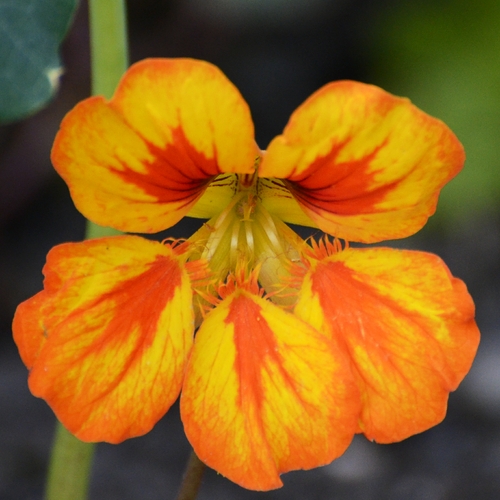 And I enjoyed the phinal phling of a pink phlox glowing in the sunshine.

One clump of astrantias are still out.

Then the butterfly came back.  I don’t know anything about butterflies but the markings look so similar that maybe it was the same butterfly as came earlier but perhaps all red admirals have similar markings. 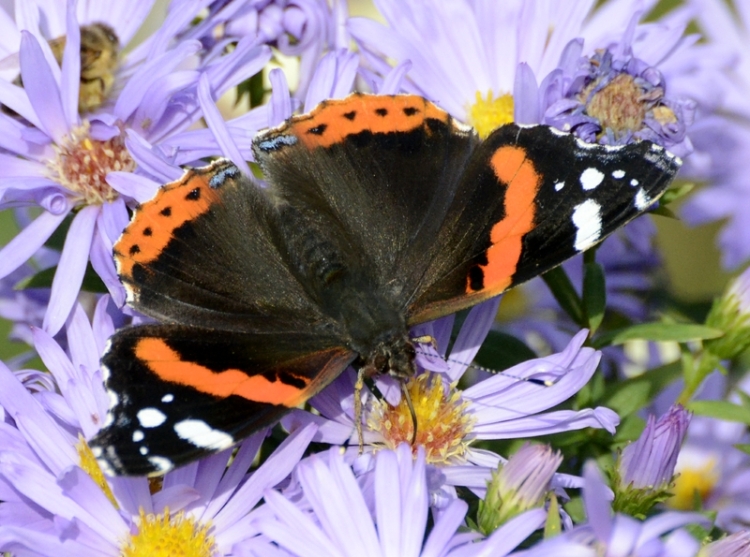 It gave me a full display.

I don’t know of another creature which looks so different from a distance and close up.

The cosmos are nearly over but they were attracting a new sort of flying visitor today.

I would be delighted if a knowledgeable reader could tell me what it is.

I took a last look at the dahlias near the greenhouse… 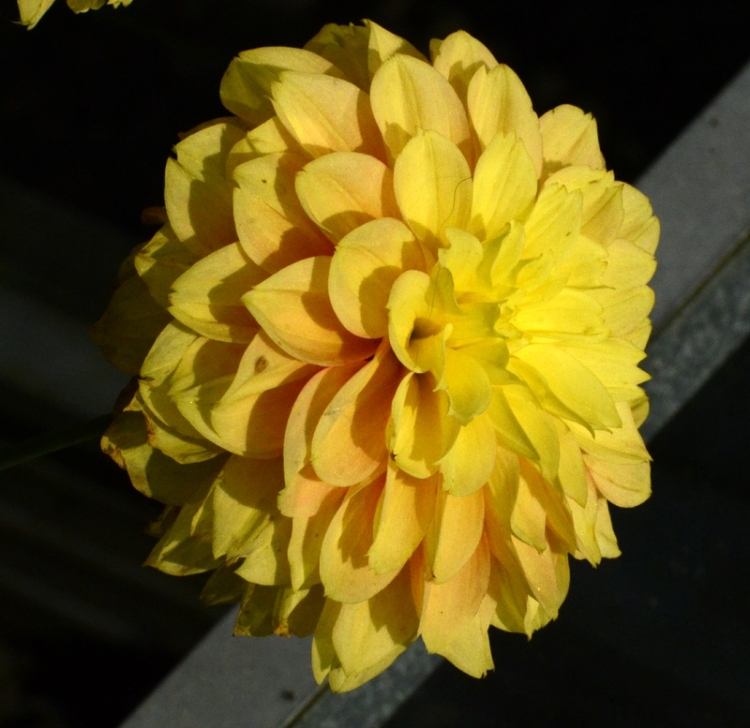 …and went back inside.

In the evening my flute pupil Luke came.  We are going to prepare for a go at a grade two exam and this means forgoing the delights of baroque duets for hard working things like scales and arpeggios and set pieces.  He has been to see a proper flute teacher and has got some useful advice from her.  I don’t think grade two will be a problem for him.

In the evening, I went off to play music with Mike and Isabel.  I have recently brought a piece by Mozart, arranged for wind player (or violinist) and cellist with piano.  It claimed in the title that it was a light piece and it turned out to be quite playable and well worth the money.  You never know what you are going to get when you buy music sight unseen so this was a relief.

Thanks to my cold, I made many more mistakes than usual but we still seemed to have an enjoyable evening.

I have updated the French trip pages with another day of photographs for anyone interested.  Two days to go.  I must say that it looks like a very nice holiday judging by the pictures.

There was a flying bird of the day as usual and as usual these days, it was a chaffinch again.