The guest picture of the day was kindly provided by my sister Susan, being one that was surplus to requirements in her own blog.  It shows just how much money is washing round the City of London when they can afford such fancy bollards.

For busy readers, I should mention that Mrs Tootlepedal and I enjoyed a drive to the Lake District and back today.  It was extremely uneventful and we combined this with some useful shopping in Carlisle on our journey home.  The weather was very nice.  That was all we did today.

For those of you with a bit of time on your hands, I should confess that I took my new camera, Pocketcam, with me and gave it a good run out so today’s post is quite picture heavy.

Our plan was to leave Langholm as near to nine o’clock as we could, drive to Cockermouth and then take the narrow road into the Lake District National Park to Crummock Water and Buttermere, arriving at Buttermere village just in time for coffee.  Then we planned a pleasant 4.4 mile walk round the Buttermere in the sunshine, followed by lunch back in the village before driving home via the picturesque Honister Pass and Keswick, stopping for shopping on the way and arriving home just in time for a nice cup of tea.

As you know, “the best laid schemes o’ mice and men gang aft a-gley” but on this occasion, everything worked out as per schedule.  It doesn’t happen often but when it does, it is very pleasing indeed.

I took one or two snaps with ‘Pocketcam’ as we went along.  Here is Crummock Water looking back towards Cockermouth.

It had been a frosty morning and there was a hint of mist still in the air.  Looking south….

…you could see the mist lifting which was lucky because that was where we were heading.

Just the drive along Crummock Water would have made the outing worthwhile but Mrs Tootlepedal’s cup of happiness ran over when we discovered a very neat cafe open for business just beside the car park in Buttermere.  Here we had our cup of coffee.

Our path took us down the shady west side of the lake and we were able to look across at sunlit hills at the head of the lake…..

…and straight across on the eastern side.

Although we were in the shade cast by Red Pike and High Stile, it was not cold as there hardly a breeze at all and walking along the fine path provided for us was a treat.  At the top of the lake, we were in woodland… 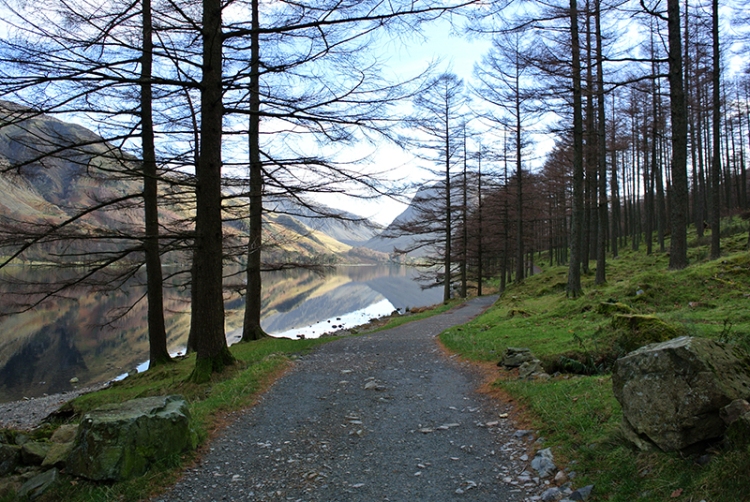 …but at the bottom, we came out into open country.

The little copse of trees which you can see ahead of us were growing on an alluvial fan spread by this little bickering burn, flowing from one of two corries above us as we walked. 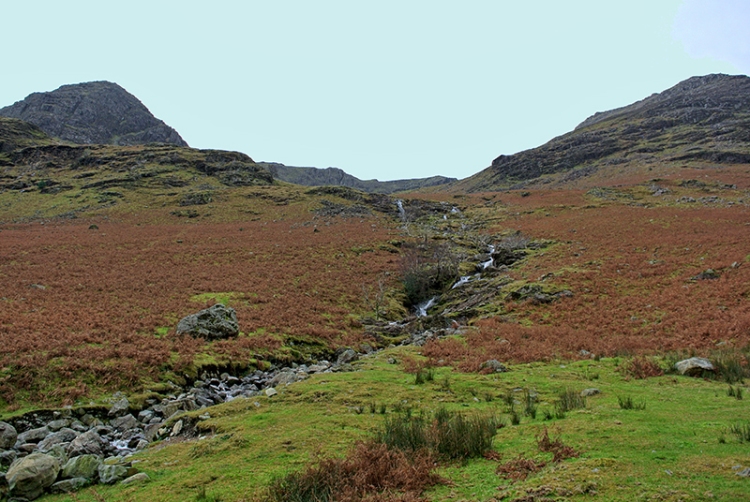 The south end of the lake is dominated by Fleetwith Pike. 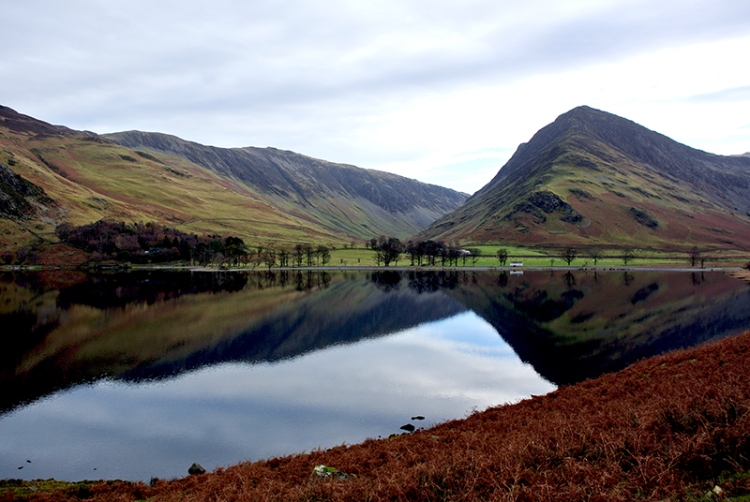 Our road home would be up the narrow valley to its left.

The wind had dropped almost entirely away by this time and although a light covering of cloud had obscured the sun, walking was still very pleasant.  The reflections were impressive.

Our path took us through the green fields that you can see at the head of the lake and up to the farm in the distance.  Here we turned for home and after a short walk along the road, we took to a path that took us right along the east bank of the lake.

It was a bit more rugged than our outward journey….

…but we were armed with walking poles and skipped over rocky steps with gay abandon,  (That is a lie:  we tottered over the awkward bits and puffed up the little hills.)  There were compensations.  The views were superb…

..,.the Herdwick sheep were friendly…

…and the reflections were so stunning that it was sometimes hard to see where the land ended and the water began.

We even had a tunnel carved out of solid rock to pass through.

There were endless reflections…

…a few single trees to catch the eye…. 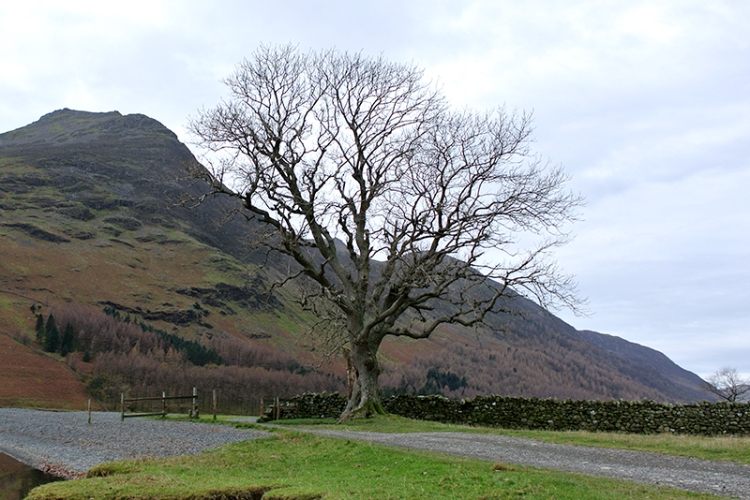 We resolved to try to visit Buttermere again a little earlier next year when the autumn colour would be in evidence.  Even though the colour had passed it would be hard to find a better day to walk round Buttermere than today.  The scene was the epitome of peacefulness.

..before arriving at the village…

…and passing by the hotel, we returned to the cafe for a bacon butty and a cup of tea, more or less exactly two and a half hours after we started our walk.

As well as lunch, I bought a small piece of Kendal Mint Cake.  This is a very sugary delicacy which I used to carry with me as the 1970’s equivalent of an energy bar in those long forgotten days when I was fit enough to run in races up and down the Lakeland hills.  It was delicious then and is still delicious now but you would have to have a sweet tooth to like it.

Although the skies were cloudy now, there was enough wintery light about to let us enjoy the dramatic drive over the Honister Pass and down to Derwent Water and Keswick.

…and we passed a few hardy cyclists giving it a go.  Two had almost made it to the top and were tacking from side to side on the steep final ascent to the col. The road surface was rather bumpy which wouldn’t have helped them at all.

Going down the other side, with a gradient of 20%, was quite exciting as it is much more bendy than the ascent was.  Although I would quite fancy having a try at cycling up the Honsister Pass, nothing in the world could tempt me to try cycling down the other side.  Going down a narrow, twisting, 1 in 5, bumpy road with on-coming traffic is exactly my idea of hell and I take my hat (or chapeau in this case) off to those lunatics who enjoy it.

Our journey along Derwent Water rounded off our lake experience very satisfactorily and the drive back to Carlisle was swift and uneventful.  Our shopping included three different sorts of goats cheese and some Basque country ewes milk cheese so that rounded off the whole outing perfectly.

The flying bird of the day should perhaps be more accurately described as the fleeing bird of the day as I harmlessly shot a pheasant on our frozen lawn in the morning before we left on our outing.  It  had escaped, for the time being at least, the more lethal shots of the pheasant shooters.