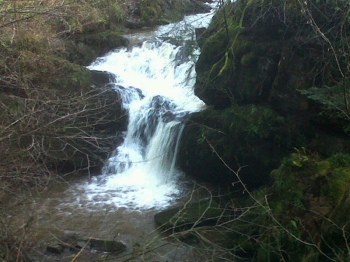 Although it wasn’t Sunday, it was a day of rest today as rain and strong winds made the thought of cycling or even walking not a very attractive proposition.  The morning was brightened by the appearance of Sandy and Dropscone for a cup of coffee, aided by the fact that Dropscone had brought some of his special Friday treacle scones with him.

Apart from that and a swift visit to our corner shop, the morning was spent in unconstructive idling.  I did try to catch the birds on the feeder but the fact that it was very grey and the feeder was swinging violently to and fro in the wind made it hard.

The afternoon was not much of an advance on the ironing but I did put in some useful time thinking about a triptych for the next camera club competition.  This is one of my first efforts.  It is made up of three separate pictures of Buttermere but I think that they go together quite well.

When you look at the picture, you are doing the physically impossible and looking in two directions at once.

The day took a turn for the better in the evening when we went to the Buccleuch Centre for a concert.  It was given by the RNSO and once again we were suitably grateful to be able to walk a few hundred yards from our door and listen to a 53 piece professional orchestra.

The RNSO played a cheery mixed programme of foot tapping favourites (with some traditional new year  Strauss thrown in) which we enjoyed a lot.  The best feature of the evening was a tremendous young Scottish soprano who matched great power with fantastic control.  Her name was Nadine Livingston and I wouldn’t be surprised if quite a lot more is heard of her in the future.  Listening to her soaring voice as she stood in front of 53 musicians, all assiduously scraping and puffing away behind her, brought a tear to the eye.

Mrs Tootlepedal had been at me during the day to get in the car and go down to sea to watch the very high tides and strong winds that were featuring on news broadcasts but I wouldn’t go, saying that there would be nothing much to see.  Very annoyingly, we met our friend Gavin at the concert and he wouldn’t stop going on about how exciting it had been watching the flood tide at Annan.  He even had photos on his phone to prove it.  Hm….and the people sitting behind us were telling us of the grand walk to the top of a big hill in the gale that they had had….Hm again.

Tomorrow we are crossing the country from coast to coast to pick up our daughter from Berwick-on-Tweed and as the possibility of snow is forecast, I hope we get back safely and I can post as usual in the evening.  Once again for my directions, I shall be using that sophisticated guidance system known as Mrs Tootlepedal