Today’s guest picture comes from my neighbour Liz and shows a Spanish butterfly which she met on holiday.

We couldn’t run to any butterflies here but we did get a reasonable February day with a temperature of 6°C and not a drop of rain all day.  There was a brisk drying wind and all sorts of things happened as a result.

Some were quite normal:

The day started with a trip round the morning run with Dropscone.  The brisk drying wind added seven minutes to our standard time for the first eight miles but after that, it rather helped than hindered and we got home in a satisfactory time without having to kill ourselves.

But other activities were a welcome change from recent days:

Washing got put out (and dried and taken in again).

Some gardening was done and a little lawn spiking took place.

I walked round the garden and noticed that the snowdrops are trying really hard now.

Even a crocus is poking through.

And I had to give our primrose a chance to star in a solo role. 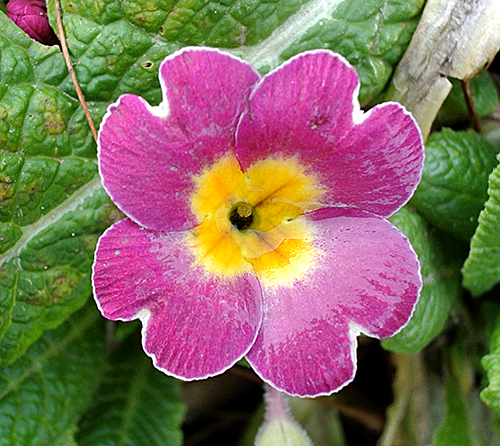 Mrs Tootlepedal and I were able to take a walk after lunch.  We went along the route I had used a few days ago so that we could have another look at things that I had seen then.

The things that look like flowers were really standing out from the wall on this peltigera.

As were these curious fungus stalks on the same wall a yard or two away.

I re-photographed some other fungus which I saw last time…

I can’t find a picture of anything like this at all.  There seem to be tiny growths to the right of it.  Other shots were of fungi that I had missed last time.

It almost looks like a mossy face sticking its tongue out.

We admired these well defined galls.

We had a pause on our walk while Mrs Tootlepedal put her hydro-engineering skills to use and unblocked a culvert which was full of leaves and spilling water across our path.  There was a most satisfying gurgle when she got the water away.

At the end of our woodland walk we came to an old gatepost and wall.

As we walked back along the Lodge walks to the car, we spotted a laurel ready to flower. 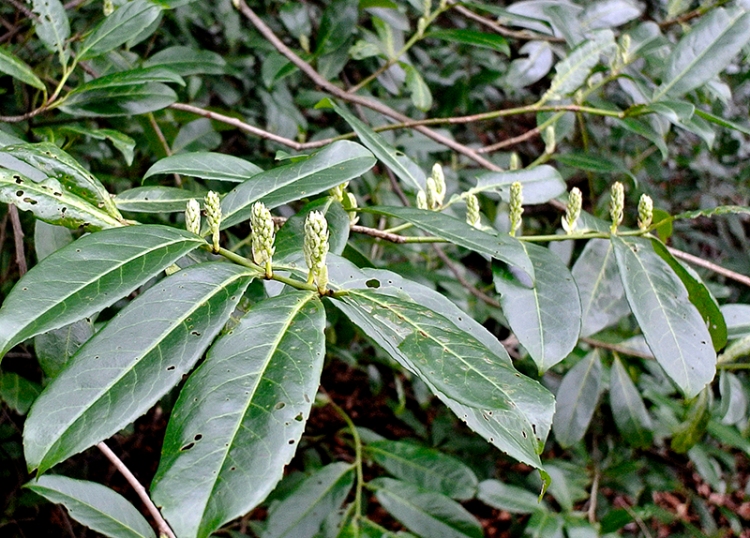 All this was rally quite springlike and we live in fear of a severe frost arriving and throwing everything into reverse with possibly disastrous consequences.   We were talking to our local cider maker on Saturday and he is very worried about his potential crop.

The late afternoon and evening were given over to music.  First I went up to Isabel’s to hear my flute pupil Luke play his grade pieces with her at the piano.  They have some time in hand still and the results were very promising.  After a an hour or so, Luke came for his regular lesson and we worked on some of the detail that is necessary for a good score in an examination.

Then after my tea, I went back to Isabel’s, this time to play trios with her and Mike on piano and cello.  There isn’t  a flood of music for piano, flute/recorder and cello but we have found pieces by Mozart and Quantz which are a treat to play (and not too hard which is lucky).

This brought the most satisfactory day for some time to a close.   A tootle and a pedal and a walk…..who could ask for anything more?  Well perhaps a ray of sunshine would have been welcome.

15 thoughts on “All the ingredients”