Today’s guest picture is of a showy bed of tulips in Regents Park, London where my daughter Annie was taking a walk.

We are almost beginning to forget the five months of gloomy weather that have just passed as the present dry and sunny spell continues, bringing joy to the hearts of the townspeople of Langholm.

I was very pleased myself when I woke up this morning with no aches and pains of any sort after my gentle tumble off my bike yesterday.  As a result when Mrs Tootlepedal suggested a cycling outing, I was only too pleased to join her and we set out on a ride up the Esk valley, crossing the river four times as we made a figure of eight loop through Bentpath and Westerhall.

This ride starts with a stiff climb and I was able to catch Mrs Tootlepedal as she stormed over the summit at Peden’s View.

We kept our eye out for roadside wild flowers as we went.  There were a lot of celandine about but I wasn’t allowed to photograph them as Mrs Tootlepedal hates them as only a gardener can hate a persistent weed.  Luckily there were plenty of other candidates.

We stopped at Georgefield to admire the llamas….

…or alpacas. I can’t tell the difference.

We crossed an impressive bridge soon after we entered the park.

…and passed through the south gates and bumped our way along a farm track until we crossed the river for the last time at Burnfoot and regained the road to Langholm.  The trip was fifteen miles of pure pleasure.

We had had an early light lunch before we set out and we had a late light lunch when we got home again.

We were just about to have a cup of tea when Sandy appeared with camera in hand.  He joined us for a cup of tea and then I changed out of my cycling clothes and while Mrs Tootlepedal went back to gardening, Sandy and I went for a walk.  Once again the Esk was crossed as we walked  along the Murtholm down to Skippers Bridge and walked back on the town side.

More wild flowers were to be seen.

The river is quite low and so we clambered down onto the rocks at Skippers Bridge.

There were birds to be seen as well.

There was interest on every side.

More sinister plants were to be found.

Sandy went off on an extended walk and I collected our car from the garage where it is going to have a new track rod bearing fitted tomorrow.  When I got home, Mrs Tootlepedal was involved in an extensive task of clearing ivy and cutting back a berberis.  I noticed a couple of newcomers in the garden flower department.

Old established flowers had asked to be taken too and I couldn’t resist their charms.

Just as I was going in to cook the tea, we were treated to another stately flypast. This time it was a bird of a distinctly different feather. 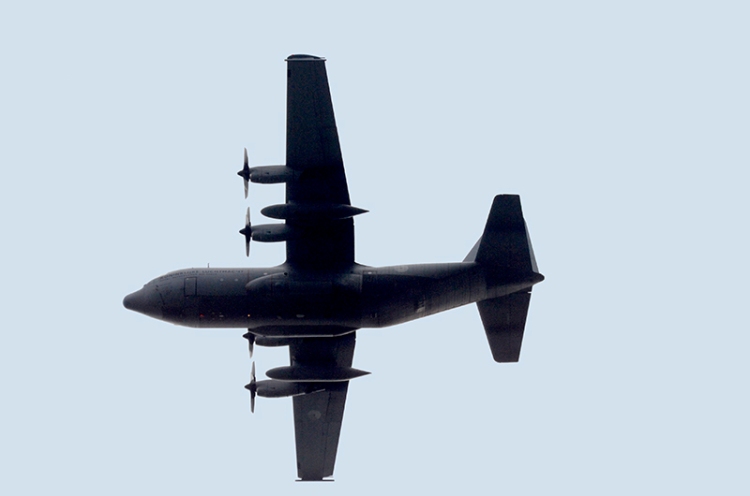 It missed our chimney but not by much.  There have been a lot of these planes flying low over the surrounding hills and many helicopters too.  We imagine that they are practising for the invasion after Scotland votes for independence in September.  Perhaps not though.

In the evening, we went off to a choir practice for Langholm Sings.  We are in the last stages of preparing for our concert on Sunday week and I got the opportunity to take half the practice and enjoyed myself immensely, leaping around like a demented marionette.  The choir is sounding very good for a small open access community group and we are keeping our fingers crossed that singing with the local orchestra will go well and that we can do ourselves justice.

Either the heron or the aeroplane might have been flying bird of the day but, in the end, I decided that a chaffinch should have that honour.  I hope that you agree.