Today’s guest picture comes from my sister Mary who was showing a friend, who is very interested in rocks, a fine example of worked stone in Trafalgar Square. 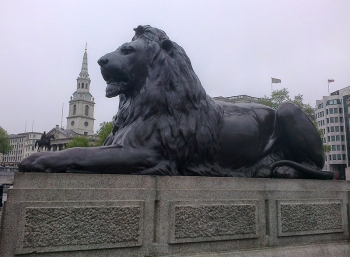 A moment of interest came over breakfast when the sharp eyed Mrs Tootlepedal notice some parenting going on under the feeder.

It is amusing to see such a large bird standing in a heap of food still having to rely on a parent.

We were visited by a blue tit a moment or two later.

The blue tit behaviour is a bit mystifying as they appear out of nowhere, take one or two seeds and then disappear for days again.

Mrs Tootlepedal went off to sing in church and I slaved over a hot computer.  I had been asked to write a brief review of last night’s concert which was added to my in tray but which was a pleasure to do because I had enjoyed The Sweet Lowdown so much.

After lunch, there was a moment to look out of the window…

..before returning to do the last two intros for the concert.   Of course if I had done this work when I first knew about it, I wouldn’t have had to spend so much time on it at the last minute but I seem to need an impending deadline to get me going.  Anyway, I got it finished in time and went along to the Buccleuch Centre to help put out the chairs.

Mrs Tootlepedal came along later and we had a full rehearsal with the orchestra for the concert.    Luckily the programme is quite short and we had plenty of time to go home for tea before the evening show.  Once again, as we ate, the sharp eyed Mrs Tootlepedal was on the alert.  Because I taken had so few pictures during the day, I have put quite of a lot of this one bird in tonight.

But not seeing anything to eat, it turned its back….

…and flew off into the plum tree and pretended to be a chaffinch.

When no other birds were fooled into approaching it, it flapped lazily off.  That made my day.  Sparrowhawks don’t usually sit still for so long on our feeder.

When the time came, Mrs Tootlepedal and I went back to the Buccleuch Centre to sing in our concert.  Sandy was in the audience and took recordings of several of the pieces and I hope to be able to put a short extract from this onto the blog soon.

Although I am not really a singer, I had offered to sing one of Gilbert’s patter songs, Sir Joseph Porter KCB from HMS Pinafore and in the event, I really enjoyed singing to a good sized audience with an orchestra to accompany me.  In general the choir sang as well as we could expect and the audience seemed to enjoy the evening a good deal.  One of them even said to me as she came out,  “I could have done with all that again.”  This is not a sentiment that you often or indeed ever hear after an amateur concert and was in part a tribute to the sensible programming which kept the concert to a very reasonable hour and a half with interval.

As a reward for the work on the introductions to the numbers, I got one or two nice laughs which for a would be comedian like myself is better than a tonic.

We both enjoyed our singing but will go to bed tonight feeling that we have been hard at work during the day.

Owing to the poor light and the presence of the sparrowhawk, flying bird opportunities were few and far between and in the absence of a decent shot, I have gone for a picture that shows that even on the gloomiest day, Mrs Tootlepedal’s garden offers a feast of colours 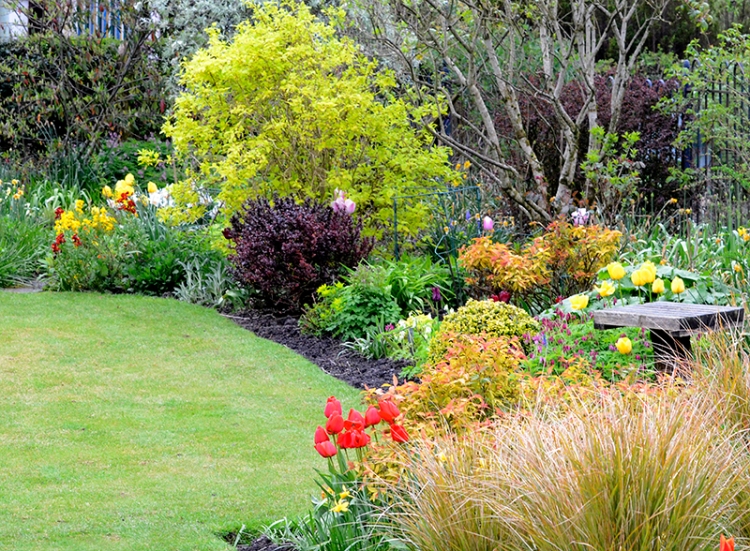