Today’s guest picture shows the delightful town of Rye.  It is a town which used to be a port and is now several miles from the English Channel coast.  It was sent to me by my brother-in-law Huseyin.

I couldn’t go for a morning pedal with Dropscone today as Mrs Tootlepedal and I were waiting for a visit from our man of business.  While we were waiting, I had a stroll round the garden.

Our man arrived promptly and we had a thorough discussion of our position and when he left we had the feeling that he was working hard to earn his fees.  We just hope that he knows what he is doing.

Dropscone e-mailed me later to say that he had gone out for a solo pedal and had had yet another puncture.  He had been kindly lent a bike to get home but it was rather small and he claimed that  he kept hitting his chin with his knees as he pedalled along.  Still, he got home and his speedy bike is now having two puncture proof tyres fitted.

After an early lunch, Mrs Tootlepedal went off to help with the driving for the disabled and I had to wait in for another man to arrive.  This time it was a gas engineer, calling to fix our boiler which went on the blink last night.  He too arrived promptly and got the boiler going.  It needs a new heat exchanger and that will arrive next week.

I spent a little time looking out of the window while he was tinkering with the boiler.

I also had time for another stroll round the garden. There is colour on every side.

When the gas man had gone, I got my bike out and got ready for a pedal.  As I left the house, a light rain started so I cycled to the top of Callister and came back to the town not wanting a long wet ride.  The rain stopped as I got back so I pedalled on through the town and up to the White Yett.  This is quite a stiff climb of 1.6 miles and I was interested to see how long it would take me.

It took me a long time and as I am thinking of entering a timed event up this hill next week, I will have to have a couple more practices to see if I can avoid disgracing myself.

I stopped on the way down the hill to admire the range of greens in the trees round the town.

I cycled back through the town and  up to Wauchope School and then home to complete a quite strenuous 24 miles.  Just before I got to the house, I had another look at the giant carpet.  It is getting on well and is being marked out as a football (soccer) pitch with strange additional yellow lines.

Mrs Tootlepedal returned full of enthusiasm for an electric bike which she had tried at the pony driving.  We both think that one of these will come in very handy when our legs stop being able to take the strain by themselves.

A very energetic neighbour has taken on the task of neatening the edge of the dam at the back of our house.  He is doing a wonderful job.

I had time to make some macaroni cheese for our tea, take a picture of the first of the clematis flowers above our back door…

..and admire a rainbow over Henry Street…. 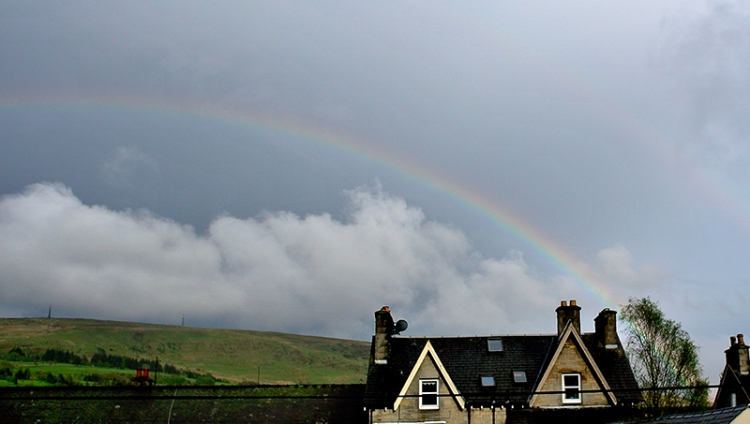 …before it was time to go the the Archive Centre.   Sandy and Jean are still both below par so I had a lonely evening putting a couple of weeks of the newspaper index into the database without even having the reward of a sociable glass of wine and conversation afterwards.

I am rather late posting today’s effort because I spent some time watching a programme on the women’s Tour of Britain cycle race.  The weather in the south was absolutely foul but, according to the commentators, these hardy cyclists averaged over 24 mph all the same.   It was an exciting stage and I am always at a loss to understand the low pulling power of women’s sport in the British media.

The flying bird of the day is a siskin in determined mood.

31 thoughts on “Waiting for the man”