Today’s guest picture was supplied by Sandy.  Because I was in the choir, I missed much of the goings on on the Baton Relay day.  To make up for this, Sandy has kindly sent me a picture of the mounted Cornet carrying the baton down the Kirk Wynd with an escort of flags of all nations in the hands of pupils from our local school lining his way. 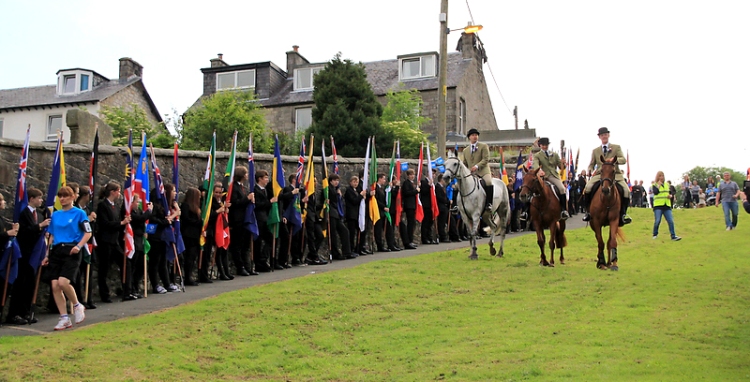 The high pressure that has given us several days of warm dry weather with plenty of sunshine was still in place today and it was a tremendous pleasure to step out into Mrs Tootlepedal’s garden after a disgracefully late breakfast and luxuriate in the aromas and the colours that surrounded me.

We are going to take some fairly drastic action to end the problem of our leaking end wall and the joiner who will be part of the action came round to talk about the work in the morning and Mrs Tootlepedal met the builder in the evening and they have both promised to get us ballpark quotes very soon so we are getting quite excited by the possibility that some work may actually be done.  It was odd to be talking about deep winter problems on midsummer day but the work needs to be done before too long or another year will pass by with more leaks through the wall.   We live in hope.

We spent the rest of the morning pottering in the garden doing useful task.  Mine included dead heading and mowing the grass round the greenhouse…and taking a few pictures of course.

Mrs Tootlepedal spotted an insect on an Astrantia.  We used to think that we knew what a bee looked like but with a bit more knowledge, we now realise that we don’t know much about bees, wasps and hoverflies at all and wondered which one of these  this one is. 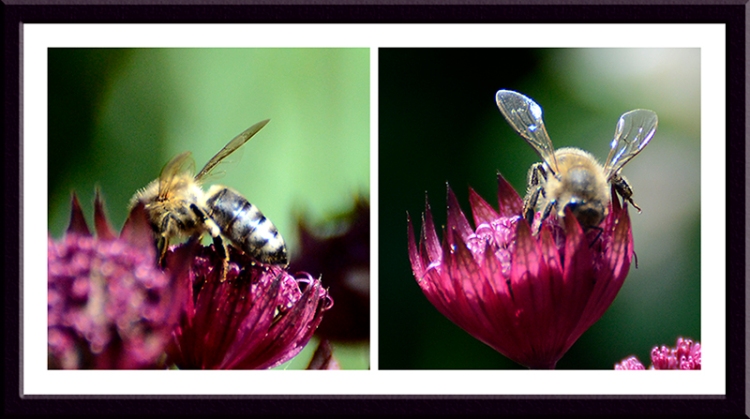 I took several other pictures before lunch but when I looked at them later, they all seemed to be strangely familiar from previous posts.  When the garden looks as nice as it did today, it is hard not to go round looking at the same things which you looked at yesterday as they are no less beautiful today than they were then.

I am putting one in anyway as Mrs Simpkins Feathered Pink is one of my favourites and it is thriving.

Among my tasks, I cleared some weed from the pond and this left a little room for a couple of water lilies to poke their heads up.

l had another tin of French sardines for lunch.  With all the oily fish that I have been eating lately, my brain should be much improved but there is no evidence of this at all.  Still the sardines, which were embellished with whole green peppercorns, were very tasty.

Over lunch I had time to watch a few birds.

I sometimes think that I concentrate too much on single blooms to give a true picture of the garden so I took a couple of wider shots while I was shaking down the sardines after lunch.

I took some close ups too.

I was very pleased to see that one of the Fuschias in the garden is doing better this year than last.  Last year it didn’t have a single bloom.  This year it has.  This is it.

The garden is full of the scent of flowers and chief among the producers are several Philadelphus bushes dotted around the place.  This double one is the most recent to come into flower.

After lunch, Mrs Tootlepedal and I walked up to Sandy’s house as he was celebrating his 64th birthday with a drop-in party and had been kind enough to invite us to join the company.  He looked very well considering his age.

It is good to see that his recovery from pneumonia is going well and he will be back at work next week.  We had a very pleasant time chatting to his friends and family in his back garden and left just in time to make room for another tranche of incoming guests.  I have no doubt that serious revelry is continuing as I write this in the evening.

When we got home, Mrs Tootlepedal returned to pottering in the garden and I went for a short pedal on the slow bike just to shake the stiffness out of my legs.

…but I was quite pleased with myself for spotting a small clump of orchids at one point in the trip.

When I got back, Mrs Tootlepedal was still gardening so I walked round with a camera to record the results of her work.

A new Dutch Iris has come out just as the blue Siberian ones are almost over.  It starts off modestly and then springs into action

The mellow evening light on the longest day of the year was just right for showing some of the plants at their best.

since I have started to look more closely at flowers, I have never ceased to amazed by their intricacy and variety.  A geranium and a lily provide a nice contrast in styles between the coy and the thrusting.

Throughout the day, we had short practices of the two songs we are going to sing in Glasgow tomorrow and in the evening we got ourselves as well organised as we could for an early start to a long day.  I am not going to take a camera with me as I want to concentrate fully on the task in hand (and anyway I would probably leave it somewhere in the coming and going and forget to bring it home).

The ever deepening blue of an Eryngium made it an obvious candidate for the non flying flower of the day today.