Today’s guest picture was sent to me by my daughter Annie, who has been in Devon.  It just goes to show, she says, that they have gates down there too.

Since it was both  a pleasant day and a Sunday, I took the speedy bike out for a spin up the main road to the north of Langholm.  I found that I was feeling quite perky and would have gone further than sixteen miles before turning for home if I had had the forethought to bring some food with me. As it was I had just a banana for added energy so sixteen miles was far enough.

I had felt a bit of breeze in my face as I had pedalled along going out but it must have been stronger than it felt, because I positively whistled home with it behind me, covering the sixteen miles in 50 minutes which is a good deal faster than my normal speed.

If those living in the rest of Britain felt that there weren’t many motorbikes about today, it was because they were all going up the A7.  I must have met about 50 of them in my two hour ride.

I was working too hard on the way out and going too fast on the way home to stop to take any pictures so I walked round the garden when I got home to take a few there.

I often concentrate on flower portraits and neglect the bigger picture.  I tried to make amends today…

…but not for long.

I tried to get a good picture of the Queen of Denmark which I missed out from my catalogue of roses the other day but it is in an awkward place for photography and it is often covered with little black flies so I have twinned it here with the new Fuchsia which Mrs Tootlepedal bought yesterday to go in the chimney pot.

I then mowed the front lawn, had a shower and ate my lunch.

After lunch, I walked past the new artificial pitch at the school…

…and onto the Castleholm where there was a flapping race meeting going on.  I was just in time to watch the pony race which started the proceedings.

I met up with Sandy and we strolled up to the top corner to wait for the next race.  There were things to distract us as we waited…

…and they helped to pass the time before the start.

The going was very firm and the horses were going at a great rate when they came round the top corner in this 6 furlong sprint.

There is at least half an hour between races so Sandy and I strolled across the infield while we waited for the next race.  As we went along, numerous swallows whizzed past us at knee height.

Although the runners in this meeting are not the cream of the equine crop, they are still very fine looking animals.

Sandy stopped to talk to another local photographer and I walked down to the bottom corner where I would be able to see the runners come round twice in the next race which was a stayers event.

While I waited, I took a shot of the castle in summer, discreetly veiled by the surrounding trees.

A thunder of hooves drew my attention back to the racing.

The riders were working hard to keep the horses on line on the fast going.

They go at a good speed and it wasn’t long before they reappeared. 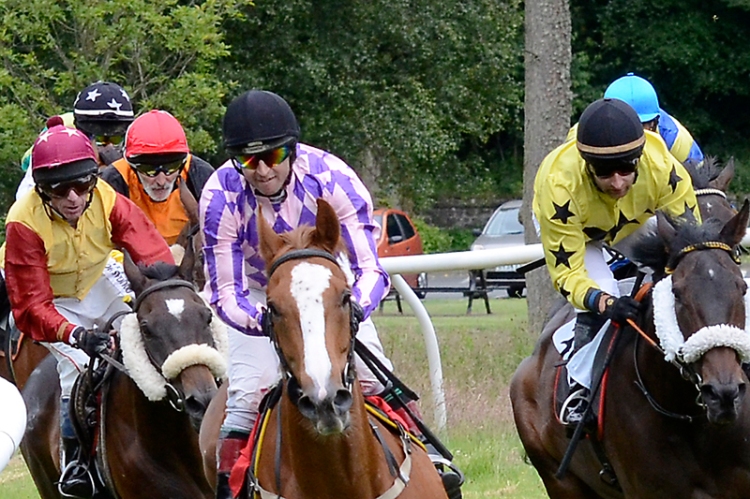 One rider was struggling to keep up and was unshipped as he came round the bend and fell heavily to the ground.  There were only two people nearby and we approached the fallen jockey nervously.  I resisted the temptation to take a shot of him lying there winded and asked him how he felt.  After some light groaning, he was able to get to his knees, rather dazed but with no broken bones as far as we could see.

I will never be a press photographer as I stopped clicking away as soon as I saw that he was falling off, although he was in my viewfinder at the time.  It seemed too rude to record his coming to grief.

I walked a few yards down the track and made sure that the jockeys coming round the corner after finishing the race didn’t run him over.  They were generally pretty unsympathetic and he actually got a cursing for being incompetent from one of the older hands as they rode past him rather than any kind words.

We were just wondering what to do about him, as he was looking a bit concussed, when a race official turned up in a car and drove him back to the start.

Sandy and I felt that we had had enough fun by this time and walked home to have a cup of tea and a slice of cake.  We agreed to meet again on the moor at six o’clock in the hope that an interesting bird might appear.

Sandy went off home meanwhile and Mrs Tootlepedal and I started to clip the yew tree which has the perennial nasturtium growing on it.  This is a delicate operation as the nasturtium has to be untangled and held carefully while the yew is clipped round about it. They yew generally looks like this, rather in the shape of a chessman….

..but it has got bigger and bigger over the years (the picture above was taken two years ago) and Mrs Tootlepedal took the view that the ball on the top was now so big as to be beyond a sensible size for an old man to get up a ladder and clip.   This was the result today.

We are hoping that the little stump that is left will start sprouting soon and a new smaller ball can be created.  If it doesn’t, it will be sawn off and the top will be shaped as a dome.

When we had finished, it was time to drive Granny up to the moor and by a stroke of good luck, exactly as we arrived so did a short eared owl which flew along the hillside not far from the layby where a group of very happy bird watchers were in position.

It is feeding young and we were able to watch it hunting along the hillside.  Mrs Tootlepedal and Granny also saw some merlins but I was looking in the wrong direction at the time.

We drove along a little way to another layby in the hope of seeing some harriers but we only got one or two fleeting glimpses so we decided that it was time for tea and headed home.  Sandy went off to where he had been told that he would find another harrier nest.  I shall be interested to hear whether he found it.

Altogether, between the bicycling, the gardening, the racing and the bird watching, it was a full day.  The flying bird of a day full of flying birds is the short eared owl looking for voles.

28 thoughts on “A bit of everything”