Today’s guest picture is the result of the purchase by my younger son of a 50mm prime lens for his camera with his birthday money.  When he told me about it, I assumed that he was going to be taking striking street photographs of Edinburgh but oddly enough, he had a different aim in mind.   The lens looks promising.

After the cycling and motoring treats in yesterday’s fine weather, today arrived in marked contrast with strong winds and frequent showers.

Unfortunately for Mrs Tootlepedal, she was off to attend a ‘fun day’ with her driving for the disabled group.  Things started badly for her when a lorry accident closed the road just a couple of miles before her destination, leaving her with a circuitous diversion on narrow roads to get there.  When she did get there, the rain was not in a forgiving mood and as her job when the driving events were going on entailed standing in the middle of a field where umbrellas were banned in case they spooked the ponies, the fun was strictly rationed.

She is a hardy soul though and came home soaked but pretty cheerful in the circumstances.

Fortunately for me, I had nothing to do in the morning and took the sensible course of retiring back to bed after breakfast and indulging in some world class relaxation while the rain hammered on the windows.

When I did get up, the rain had stopped for a moment and the sun had come out.

I looked out of the kitchen window.

One marigold was very cautious about opening fully out in case of more rain. 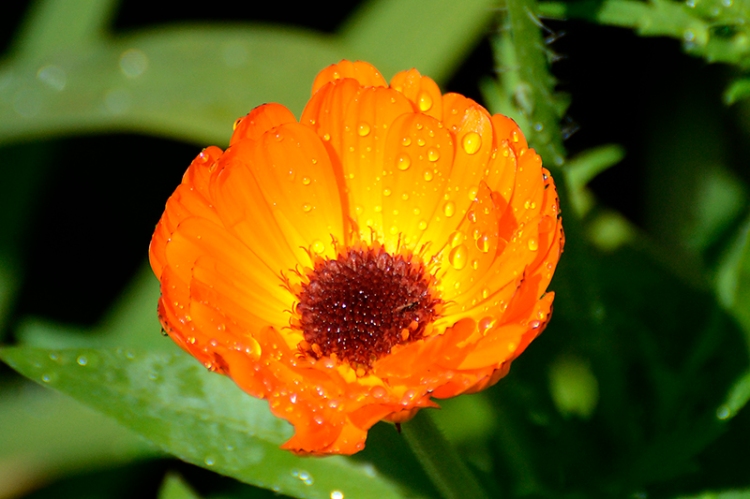 I don’t blame it as it soon started to rain again.

One of the astrantias is having a late burst.

I had lunch and caught another sunny moment through the kitchen window.  You wouldn’t think that such a dainty perching bird …. 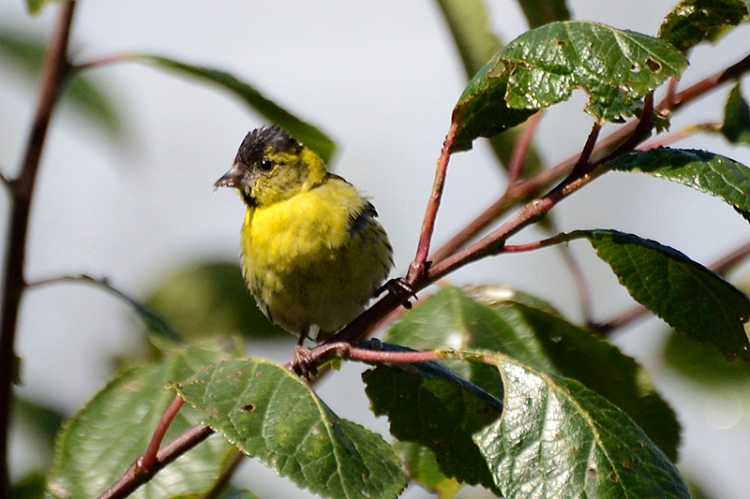 ….could turn into this a moment or two later.

There was no shortage of flying birds today and several shots were spoiled by unwanted extra fliers.

I hate filling in forms but as a trustee of the Langholm Archive Group, which is a registered charity, I have to complete an annual return to OSCR, the charities regulator and finally, a month after the due date, I managed to pluck up enough energy to do it and post it off.  It will probably come back with a rebuke for errors and omissions but at least I have got it out there.

I celebrated by waiting for a heavy shower of rain to pass over and then going out for a quick walk.  It was warm and sunny but I didn’t dally because there was no way of knowing when the next shower would arrive,  Nevertheless, I took a picture or two as I went round Gaskell’s Walk.

I liked the waterfall effect of plants over the wall at the top of the Manse Brae.

And I stopped to admire my favourite fence post.  It has a little garden of various lichens its top.

I am amazed by how many different sorts of lichen grow in such a small area.  There are even more striking ones on the same post.

On the stones of the old bridge, a sheet of white lichen was being gently coloured in. 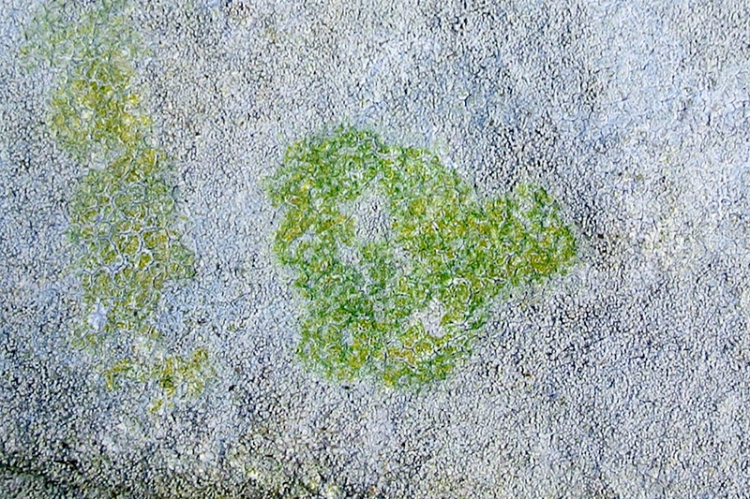 Further on, I came across a little fungus too. 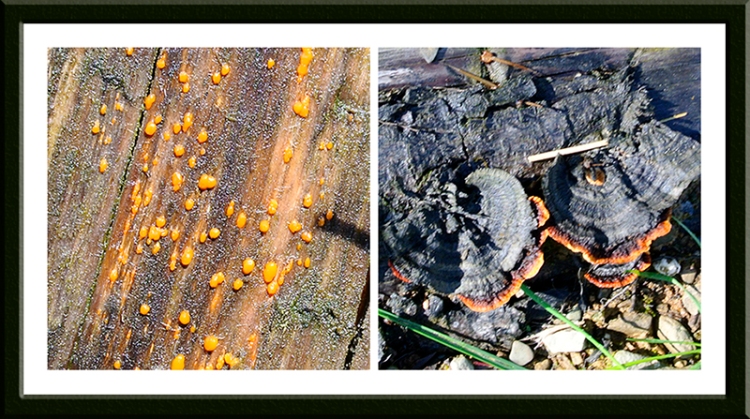 I might have seen more but someone had been along the path with a strimmer.  This made it very satisfactory for me as  a walker keeping his feet dry but not so good for me as a snapper hoping to see interesting things at the path edge.

I pushed on, hoping that the sun would stay out while I walked.  There was an excellent view of Whita from Stubholm.

When I got down to the path beside the park, a clump of Himalayan basalm towered over my head. It is generally regarded as a pest in spite of its pretty flowers.  It certainly takes a hold when it is established.

On the other side of the path, the wall beside the park is another garden in itself. 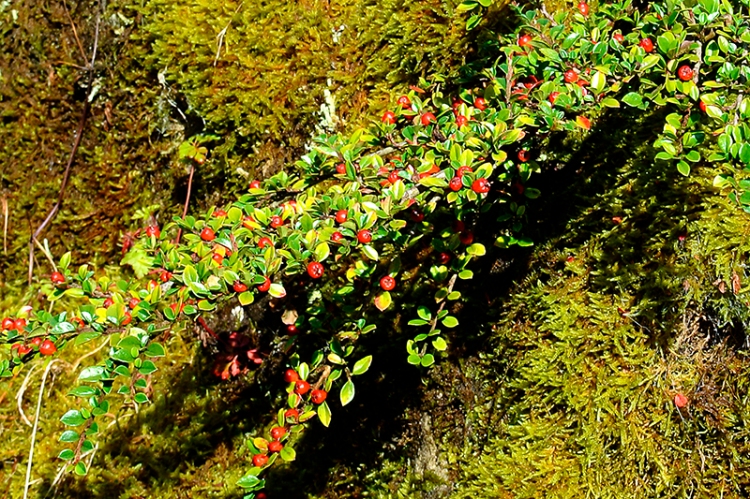 You could hardly guess that there is a stone wall behind all that growth.

In the end, it turned out that I could have taken my time on my walk as it was still sunny long after I had got home.

In the evening, I went up to the Archive Centre by myself.  Sandy is on holiday and Jean is still in hospital.  I called in to see her on my way but she was too tired to receive visitors as she has not been very well lately.

I managed to concentrate enough to put two weeks of the index into the database but I am still a bit behind the data miners and will have to pull up my socks if I am to catch up with them.

In one of the short sunny spells, I did manage to catch a chaffinch on its own as flying bird of the day. 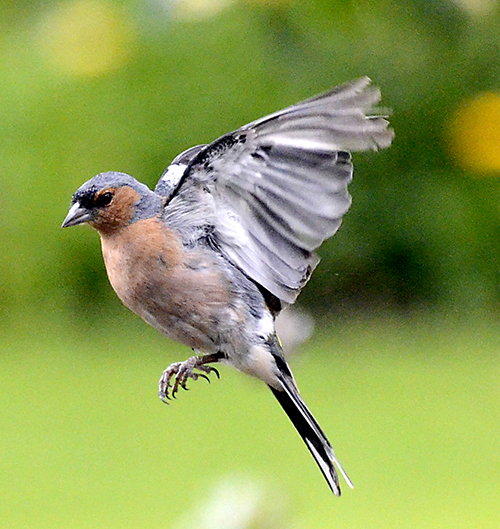