Today’s guest picture was given by Wattie to Gavin and then Gavin forwarded it to me.  It shows Wattie’s big tattie.  There will be quite a few chips made out of that when it’s cooked.

The day started rather disappointingly for me although it looked very promising.  It was another fine, dry day with light winds and Dropscone and I set out for the morning pedal to Gair and back at the same time as Mrs Tootlepedal set off to Edinburgh to visit the world’s greatest baby.  She got to Edinburgh and Dropscone got to Gair and back but I only managed three miles before having to turn for home.

I had raised my saddle a bit yesterday as it seemed to me that I might be putting too much pressure on my knee by having the saddle a bit too low.  This turned out to a misjudgement and raising the saddle straightened my knee too much and I was getting bad back pains soon after starting out.  Being sensible for once, I gave up before doing any damage and retired for a rest and a shower before Dropscone returned for coffee

While I was waiting for Dropscone to appear, I took my new macro lens out into the garden and pointed it at some flowers.

The sharpness and depth of focus are very encouraging.

All these were shot hand held with the vibration reduction switched on.  Considering how wobbly my hands are, I was encouraged.  I will try it on a tripod soon.

I can fit the new lens onto Pocketcam if I wish and although it isn’t easy to use as it has a screen viewer and not a viewfinder, it made a fairly interesting job of a sedum.

Dropscone arrived  flushed with his speedy efforts when not held up by me.  We were joined later by Sandy, who had been on a fifteen mile cycle ride, just after we had eaten all the scones but luckily I had a large iced bun on hand to give to him to go with his cup of coffee.

When Dropscone and Sandy had left, I set about doing some business.  I made up some folded cards with local views on them which I hope will raise money for the Archive Group  and  took them with some of our Archive Group postcards up to the High Street.  The folded cards got a very good reaction and I sold two and got an order for ten more.  I also sold twenty of the postcards so that was very satisfactory.  What was slight less satisfactory was that I had forgotten to bring up an article and advertisement about our camera club meeting  to give to the newspaper office and so I had to bicycle back home and up to the High Street again.  Still, it was a lovely day so it was no great hardship.

After lunch, Sandy reappeared and we took the car round to the Castleholm and went for a short circular walk along a track on top of a wooded bank and back by the road.  I had hoped that the new macro lens might be useful for other things as well as close-ups and gave it a good work out.  You can judge for yourselves whether it might help me in my landscape photography.

It was a very hazy day and long shots were not possible so I tried some medium and short range efforts. 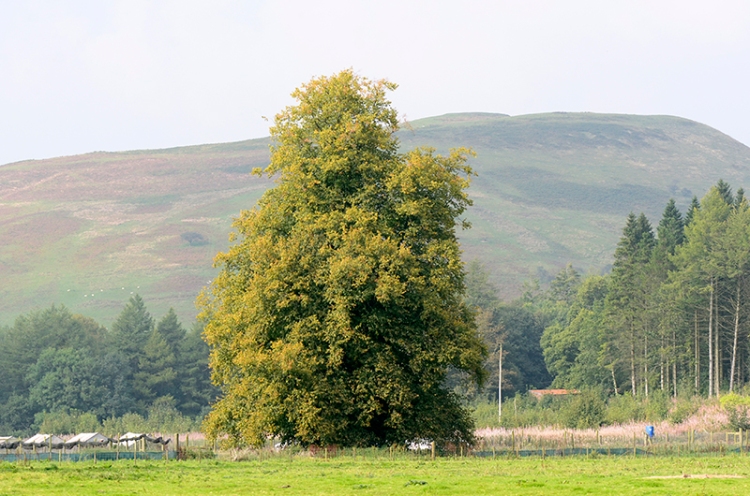 The sharpness and good depth of field look promising to me and I think that these shots are better than I could have taken before.

I tried some black and white.

I am quite excited.

I couldn’t resist one close up with the macro lens as we went round.

I had Pocketcam with me too and tried a black and white with it while I was in the mood.

Sandy was clicking away as we went round and we both voted it a thoroughly good outing.  Although it was quite hazy, it was a perfect temperature for walking in shirt sleeves and we were certainly ready for a refreshing cup of tea when we got home.

After we had drunk our tea, Sandy kindly stayed for a while and helped me put a week of the newspaper index into the Archive database.  I have been doing too much cycling and tootling and I am well behind with this work.

When Sandy left, I had a last walk round the garden…

….ate a few raspberries and then cycled up to the Archive Centre to do some housekeeping and put another week into the database.

Although I was concentrating on flowers, I did notice a couple of low flying creatures during the day.  A bee in the morning…

…and a butterfly in the afternoon. 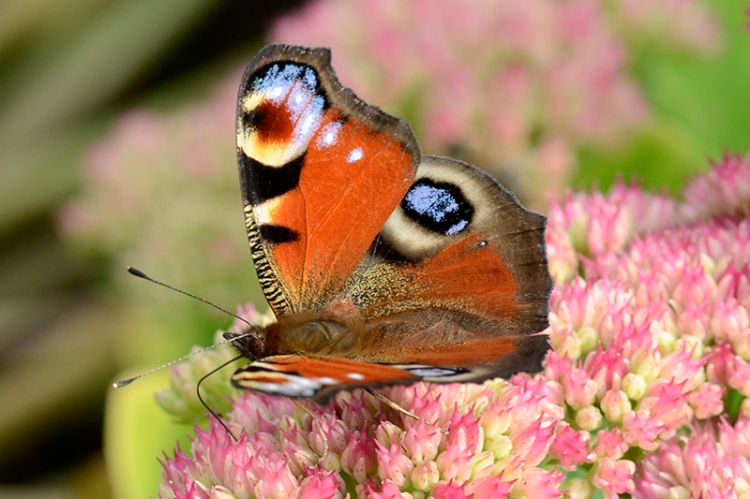 I am glad that I got a good day to try out the new lens.  It would have been frustrating to sit staring out of the window on if it had been a rainy day.

I made some semolina pudding as a welcome home treat for Mrs Tootlepedal and I rounded off an interesting day with a visit to the Buccleuch Centre to hear the Blues Band in a concert.  This is a group of veterans of about my age who have been playing together since the seventies and have pretty well mastered it.  They are very relaxed and unpretentious and we were reliably told that one member had used his senior railcard and free bus pass to travel to the gig.  Mrs Tootlepedal arrived back from Edinburgh in time to join me for the second half of the concert and apart from the whole thing being far too loud for comfort, we enjoyed ourselves.  It is one of life’s great pleasures that I can go to a concert of unaccompanied madrigals and masses one week and a raucous celebration of blues music the next and enjoy them both.   I appreciate my good fortune in having venues for both near at hand.

I did catch a flying bird (just) with the zoom lens before I put the new lens on.

27 thoughts on “Peering about”