Today seems to be World Book Day and to celebrate this, my Newcastle correspondent has sent me a picture of her daughter Hannah with just a few of the books she is reading. 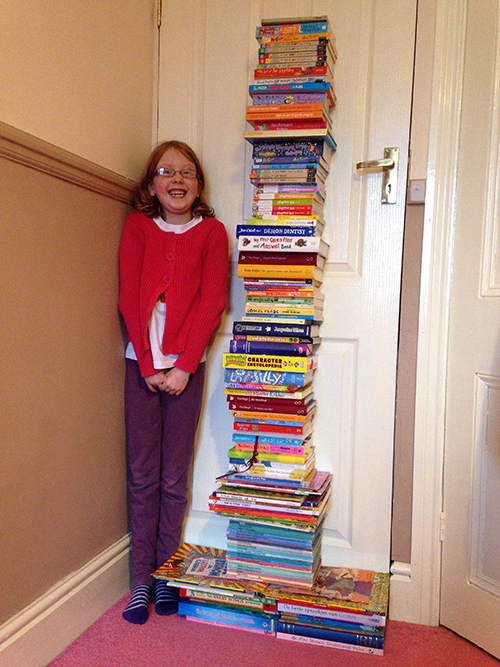 The temperature was a little up this morning.  This would have been welcome if the wind hadn’t also got up and the clouds come down.  This made for a rather gloomy day.

I spent a lot of the day hoping the things would improve but they didn’t.

I started the day by taking our new second hand car to our local garage for a health check.  At first acquaintance, it seems to be so low mileage and in such good condition than I was worried in case it was too good to be true.  I walked home in time for breakfast.

The frogs found the weather just to their liking though and the pond was chock-a-block with them. 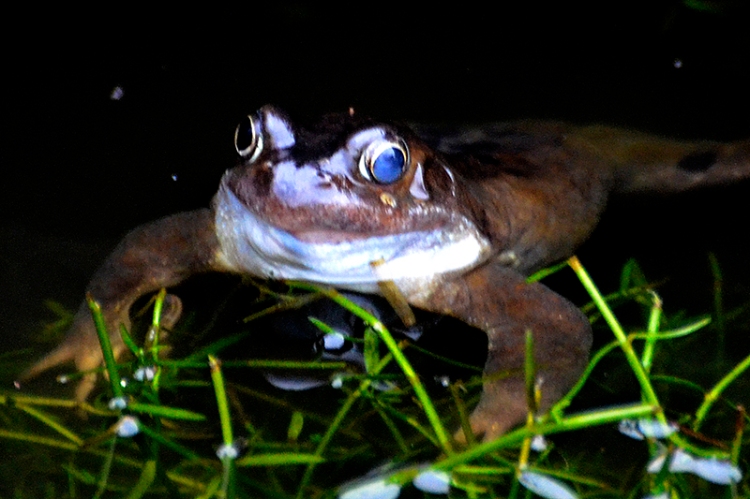 Later on, I was cheered by the arrival of Sandy on his way back from filling the Moorland Feeders just in time to join us for a coffee.

We wondered whether the weather might be better a few miles south so he drove me down to the Hollows and we took a walk up the track through the Byreburn Wood.  It turned out that the weather was much the same down there, windy with occasional drizzle but the walk through the woods was well sheltered so we didn’t mind.

There was a striking patch of moss on the wall beside the old main road as we walked along the river to the start of the track through the woods.

There has been a ,lot of forestry work in the wood and we were a bit worried about the state of the track.  Our worries were groundless though as the track has been restored to a better state than it was in before the forestry work began.

The wood men took most of the coniferous trees out of the plantation but were careful to leave the deciduous trees untouched.  As a result, the wood looked pretty good for one that has had substantial felling, light and airy and very green as we walked along.

The tree felling meant that the little waterfall at the Fairy Loup looked less sombre than before but it still has too many saplings growing in front of it for a photographer’s taste. 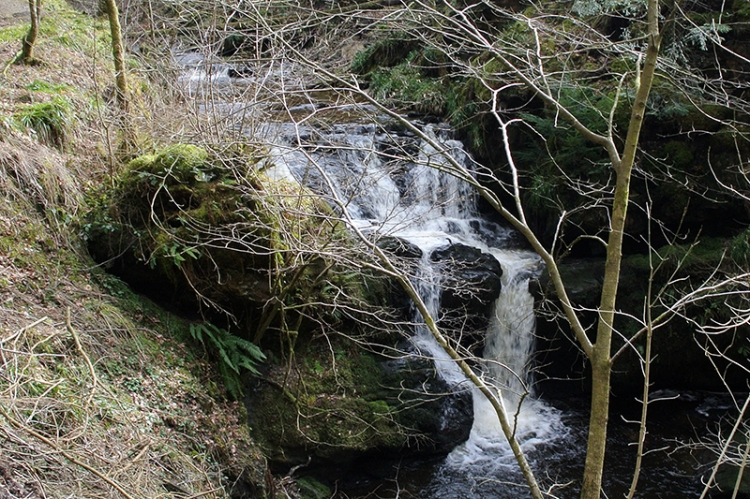 I would like to scramble down to the waterside to get a better view but the bank is far too steep so I took a shot of the minor cascade at the top instead.

Instead of going back by the same way that we had come, we walked further along the excellent track…

…admiring a plentiful crop of catkins… 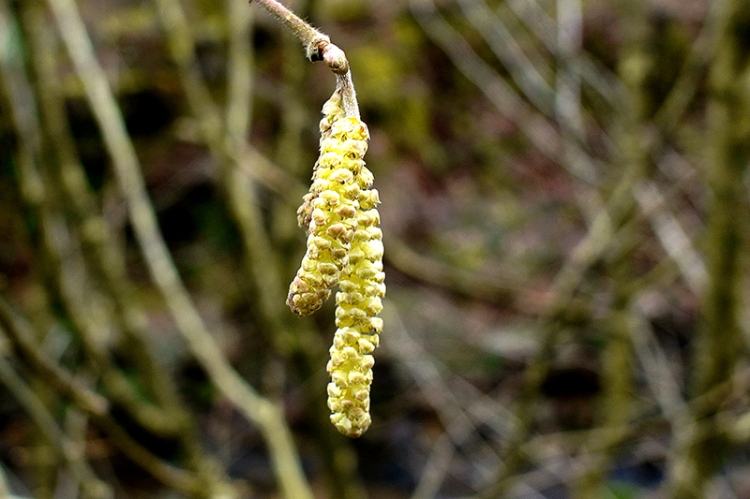 …until we came to the road, which we followed back to the car.  We were exposed to the wind and drizzle once we were out of the woods and frequently wondered about the wisdom of our route choice.

In spite of the drizzle, we really enjoyed our walk and aim to go back and see what the newly cleared woodland will look like in a month or so.

I picked up our car from the garage on our way home and was delighted to find once again that my fears were groundless and that it is indeed as good as it looks.  As soon as we get a good day, Mrs Tootlepedal and I will put our bikes in the back and go off for a jaunt.

It was too gloomy for much bird photography… 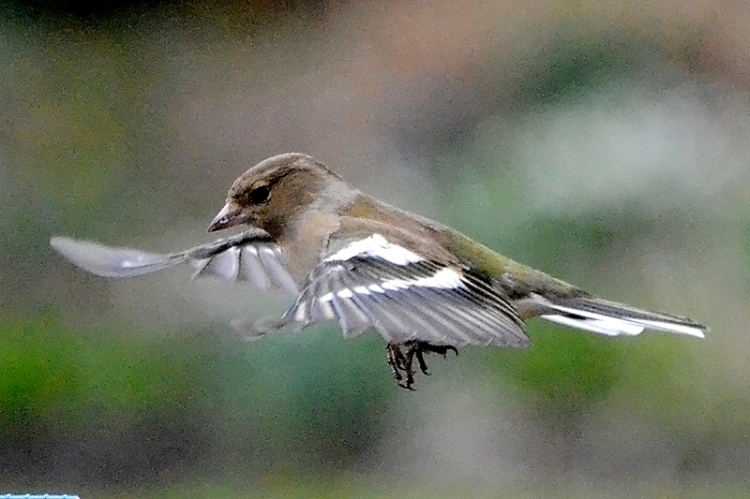 …and there were very few birds about anyway.  This was in spite of the absence of builders who were working elsewhere in the town today.  I didn’t see a siskin all day.

The frogs were undaunted and at times the noise from the pond was nearly as bad as the builders.

They came in various sizes…

…and there was a whole lot of love about.

I was lucky to look up from my work at just the right moment to catch a robin obligingly perching on the arm of a bench.

It looked rather ruffled but when it turned away a bit, it looked better.

It is quite hard to believe it is the same bird taken within seconds.

Although the builders gave us a miss today, the electrician came in the late afternoon and started his work so that kept us more than happy.

In the evening, Mrs Tootlepedal went off to the Buccleuch Centre to see a film about J W Turner and i went up to the Archive Centre with Sandy.  My journey was rather pointless as once again our internet connection refused to co-operate so we retired for a glass of wine and a sulk before coming home early.  Still, I managed to put a third week of the paper index into the database when I got home so I had had quite a productive day in that respect at least and have kept up with the data miners.

Mrs Tootlepedal’s film went on far too long for her to be able to enjoy it.

The flying bird of the day is one of the few chaffinches that visited. 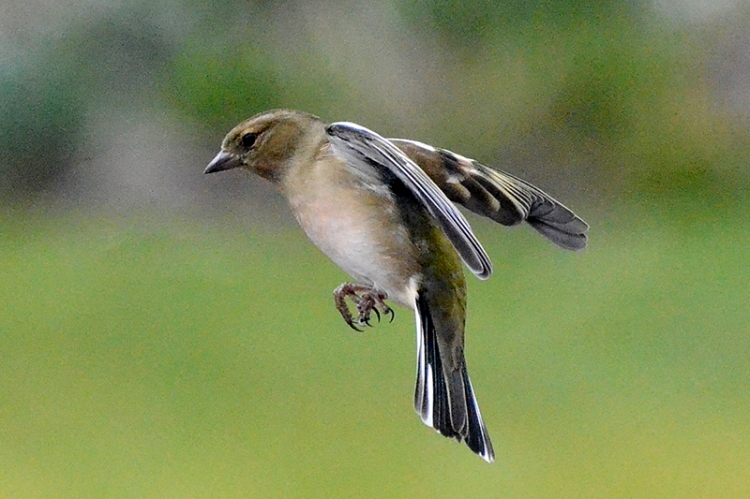