Today’s guest picture was sent to me by my friend Bruce.  He and his wife have been for a lunch at Gretna, which is on the border between England and Scotland.  As a service to their customers, the eating house of their choice shows the time on both sides of the border. 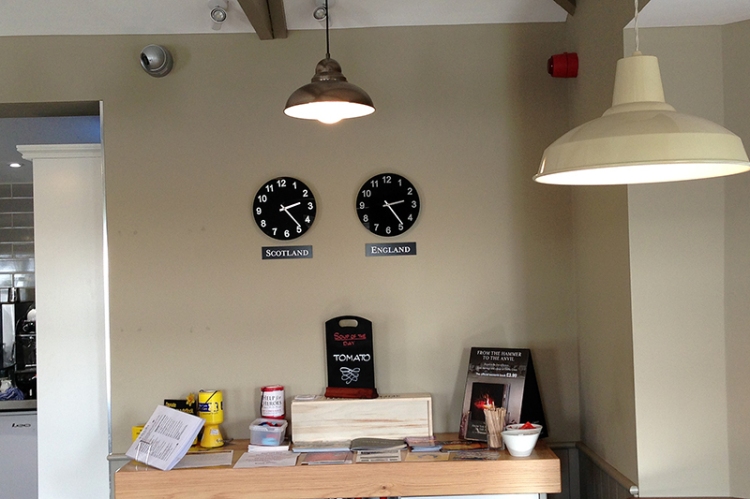 I started the day off with a visit to our local producers’ market in the Buccleuch Centre.  To assuage my grief at the non appearance of the fresh fish man, I bought extra supplies of cheese from the cheese monger and some mint chocolate thins from our local chocolatier to supplement my usual supplies of honey, venison and lamb.

After a cup of coffee, Mrs Tootlepedal and I went up to the Moorland Feeders where I was once again standing in for Gavin who is still enjoying the delights of the USA.

While I battled through the weather to refill the feeders, Mrs Tootlepedal sat in the car watching a pair of harriers (we think) displaying above the moor. 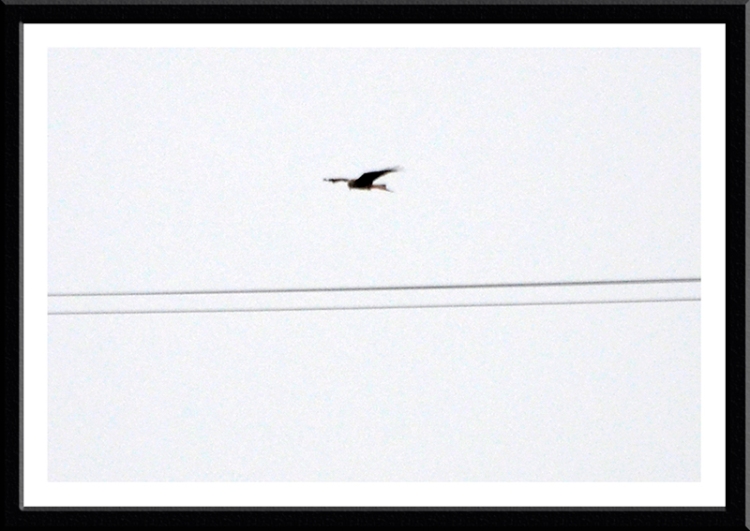 This was my best effort to record one of the raptors.  Mrs Tootlepedal’s delight at seeing these free flying birds was modified by the thought that her binoculars were hanging in the kitchen.  While she scanned the moor, I retired to the shelter of the hide and watched a multitude of chaffinches.

They were not immune to the effects of the wind.

Among the chaffinch hordes, the peanuts attracted a select band of great tits.

Thanks to the combination of the lack of binoculars and the poor light, we didn’t stay long

After lunch (soup and a delicious selection of cheeses), I sat down to do the crossword as it was far too windy to consider cycling.   Just when I needed a crossword that would challenge me for a good time, the powers that be provided me with one that did not detain me for very long so I went out to look at the garden.

At last, a daffodil is genuinely out… 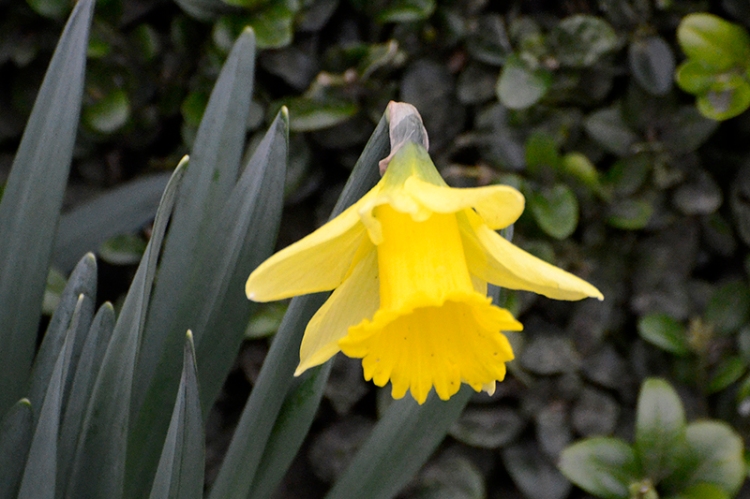 …but in general the early daffodils are not flowering well after a great effort last year.  Another two aconites have appeared which has made Mrs Tootlepedal a little happier about them.

I met a blog reader at the Market this morning who told me that although she likes my photos in general, she can’t stand the frogs at all so if you are reading this today, Isabel, look away now.

The frogs were very happy. 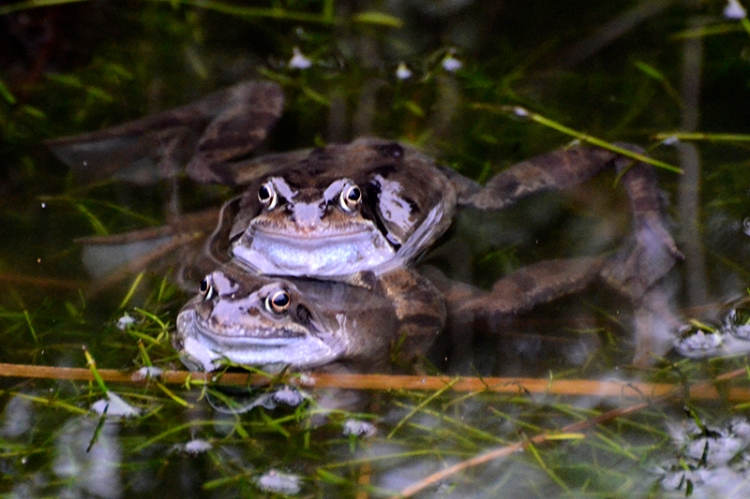 And I was very happy to see a pair of robins in the garden and especially happy when one posed for me.

I watched a bit of the Davis Cup on the telly but the appeal of watching tennis wears off after about twenty minutes, however good the game, so I thought that I would go for a walk as it wasn’t actually raining.  I chose to walk round Gaskell’s whihc was fairly well sheltered from the blast.

It was still tremendously gloomy and rather soggy…

…with water running off the fields and no chance of a view…. 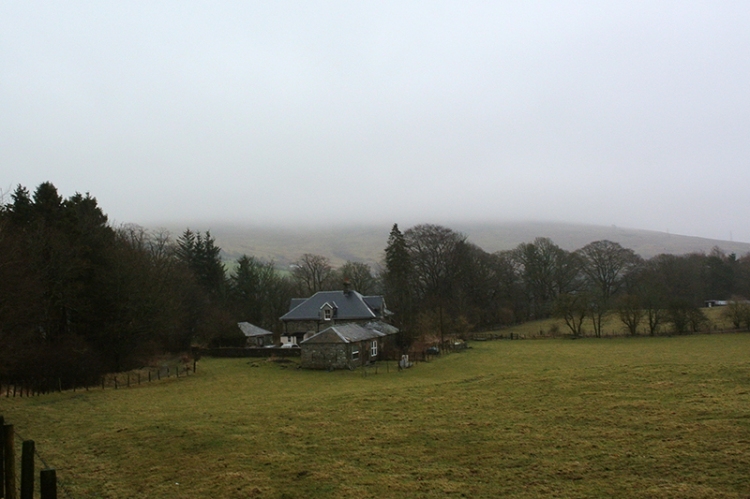 …with the cloud base at about 500ft so I took a little torch with me to help Pocketcam out with some lichen shots as I went round.

From a visual point of view, I enjoy lichens set among others in contrasting colours. 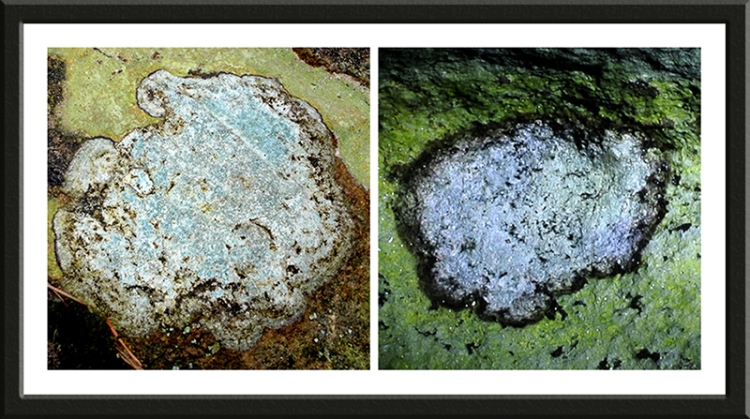 …though some are hard to miss.

Cup lichens are generally my favourites…

…but today, this one tickled my fancy most. 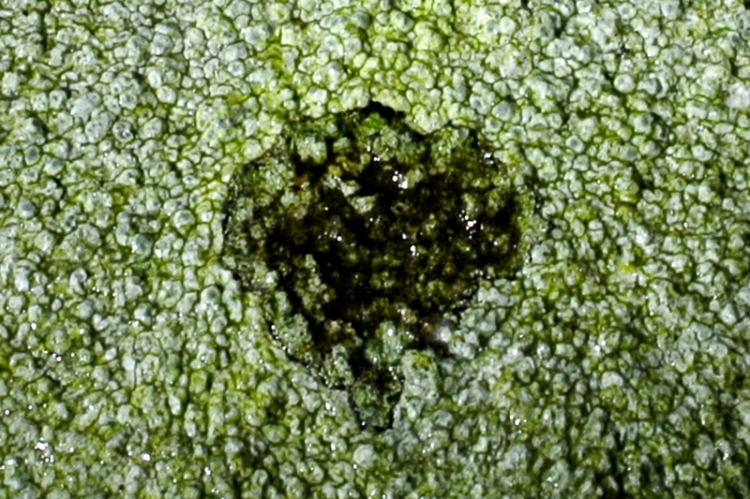 I thought that the torch worked quite well with the lichens but it produced unwelcome sparkle when used with a fungus.

In the end, I was more than pleased to have been able to get a walk in and take any pictures on such a gloomy day.

The tennis was still going on when I got in and I watched the exciting last few games of an excellent doubles match.  The redoubtable Bryan brothers just got the better of the British pair in a five set match.

The  flying bird of the day was an insuperable problem and this muddy siskin apparently head butting the feeder was my best effort. 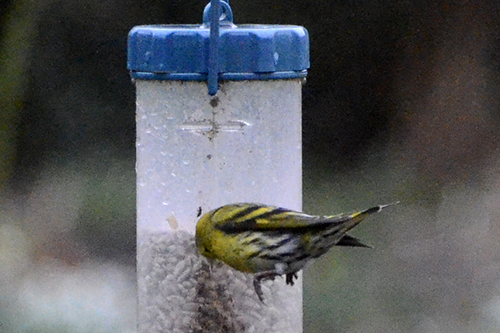 36 thoughts on “Peering about in the gloom”