Today’s guest picture comes from Fiona, my Newcastle correspondent who is spending Easter in The Netherlands, her husband’s country.  Her children were having fun on a Kabouter (gnome) hunt. 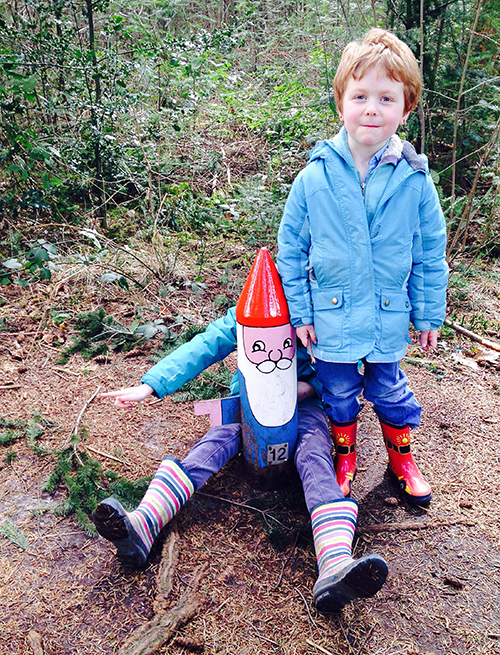 Our welcome spell of dry and relatively calm weather continued in spite of this being a holiday weekend and after Mrs Tootlepedal went off to sing in church, I got my fairly speedy bike out.  I hung about looking out of the kitchen window from time to time while a robin and a sparrowhawk posed for me (but not when I had my camera to hand).

….a chaffinch landing on the feeder….

…and a hard stare from a jackdaw.

I got going in the end.  It was a misty morning as I set off up the A7 to visit the Mosspaul Hotel and I was a bit worried about the visibility at the top of the hill.  As I got near to the final climb, the mist began to lift.

I was dressed for a misty morning and when the sun came out, I was too warm for the first time this year.  The ten miles gently uphill from Langholm to Mosspaul were an absolute pleasure thanks to the gentle wind behind me and the cloudless blue sky when I got there. 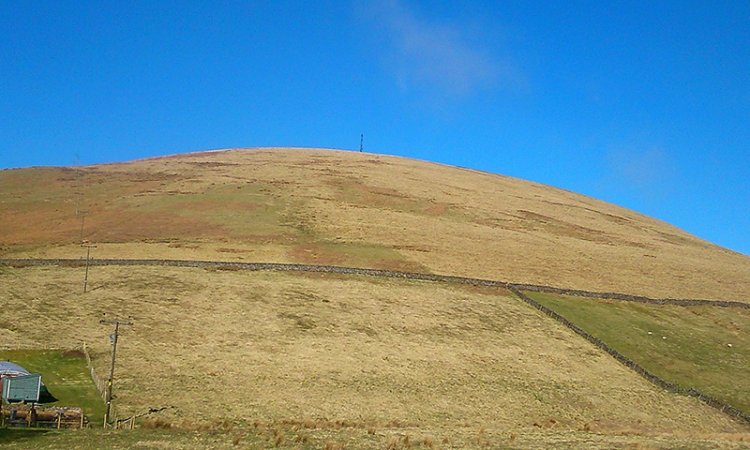 Looking back down the road… 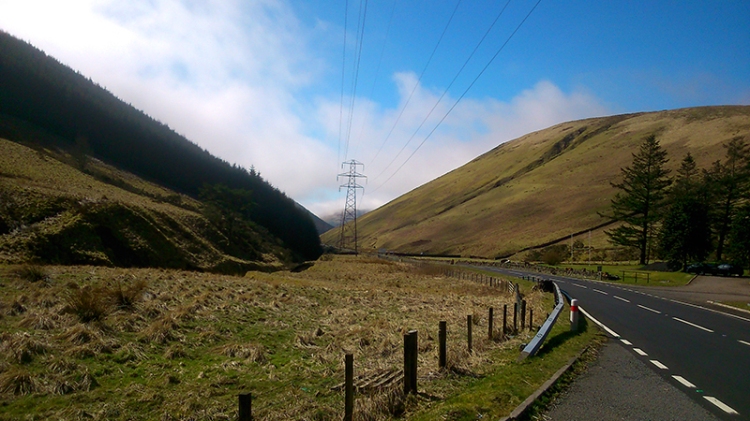 …the morning mist could still be seen but the sun stayed out until I was nearly home.  In a rather mean way, the gentle wind that had helped me up the hill had picked up quite a bit for the return journey and I had to work quite hard to pedal down the hill at times.

Although I was cycling along a main road, there were no lorries about, it being a Sunday, and the other traffic was very light so I had a very pleasant ride.

I had time for a shower and a light lunch before we put our bikes into our new Kangoo and set of for a drive and ride.  Although our newer version of the Kangoo is definitely bigger than our old one, the designers have made it much less bike friendly by lowering the internal roof roof with some unnecessary storage space and some noise insulation.  After a good deal of huffing and puffing, we worked out the best way to get the bikes in and set off.

Our route took us over the hill at Mosspaul again and through Hawick to the picturesque village of Denholm. 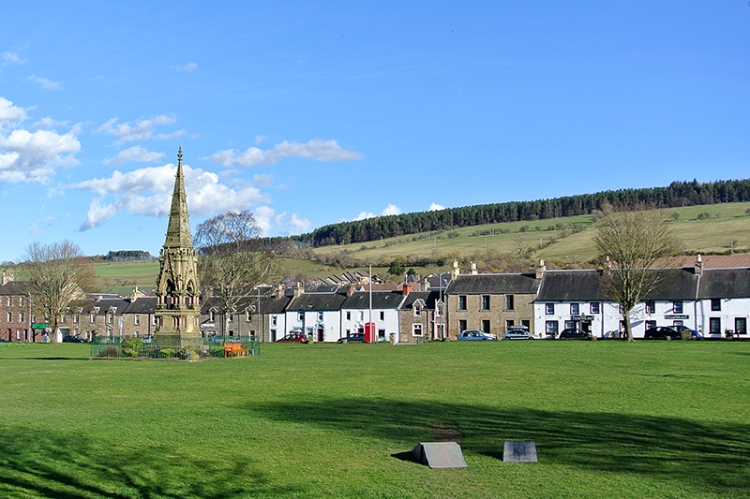 Not only was the sun definitely out at Denholm but the temperature was 5 degrees warmer than in Langholm, showing once again what a difference crossing the watershed from west to east can make to the weather.  (Our neighbour Liz told us later in the day that to the west of Langholm, the morning mist had never lifted.)

We had definitely made a good choice of venue for our pedal.  Our route took us for seven miles along a back road beside the Teviot Water, with a cup of tea at a garden centre our ultimate objective.

At 18° C, it was more like summer than spring and if we had stopped to take every photo opportunity, we would never have reached our destination.  As it was, a short diversion to Mary’s Dairy for a home made ice cream at the Harestanes Visitor Centre only just left us enough time to get a cup of tea before the garden centre closed.

The back road that we followed was perfect for leisure cycling, undulating just enough to be interesting without being painful, passing through varied countryside in its short length and being almost free of traffic.  Here are some of the pictures that I took along the way.

In between we passed Fatlips Castle, perched high on a crag… 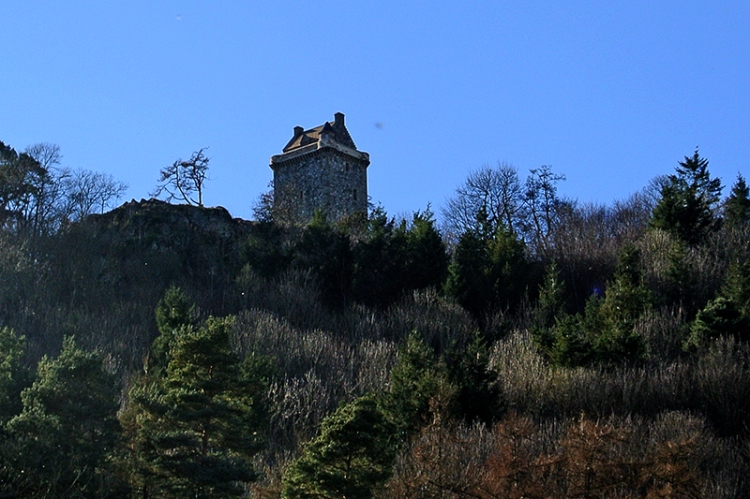 ….looked across the Teviot valley….

…and enjoyed a little shade too.

Near Denholm, we were very much struck by the sight of patches of hedge that looked as though they had been splattered with yellow paint.  Closer examination revealed that they were covered in lichen. 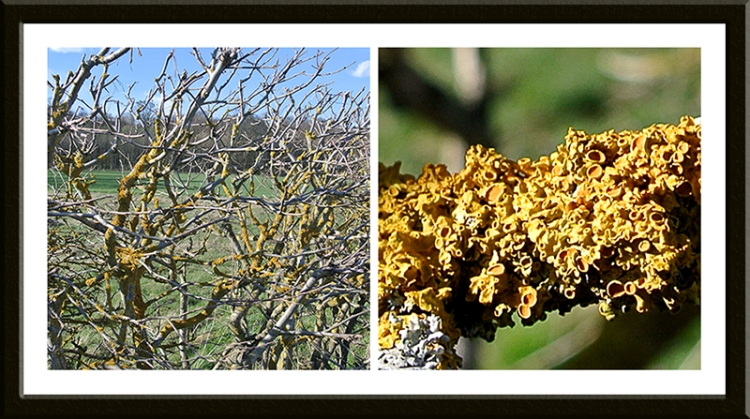 Altogether, it was fourteen miles of sheer delight from start to finish.  It is amazing what light winds and good sunshine can do to add to the sum of human happiness.

Although it is only thirty miles away from us, the countryside around Denholm is entirely different to the country round Langholm and this was as good as a foreign holiday for us.

The drive home was in wall to wall sunshine and although we watched the car thermometer lose six degrees as we went over the hill at Mosspaul, it was still a beautiful evening when we got home.  Some of our blog readers were kind enough to wish us a happy Easter.  Their wishes were amply fulfilled.

The rest of the evening was spent in a somnolent manner and an early bed beckons.

At one fortunate moment during the day, I happened to have the camera to hand as a chaffinch flew past. 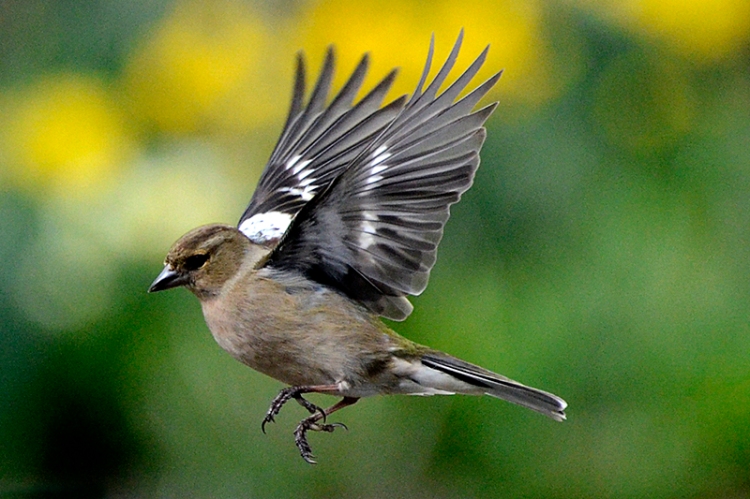 36 thoughts on “Head in the clouds”