Today’s guest picture comes from my elder son and shows one of his dogs having a grand postprandial snooze.

The forecast was very good and the wind was light so it was a perfect day for a pedal and for once I had the time to take advantage of this.  Dropscone and I have been inveigled by the minister into entering a 50 mile sportive in Cumbria quite soon and the course there is very hilly so we thought that a 40 mile hilly ride of our own would be good preparation.

This was by far the hilliest ride that my new knee had encountered so I persuaded Dropscone to take it very easily.  As this was a longer run than he is used to, he was quite pleased to comply.

In the event, we got round quite well, though a couple of stiff climbs in the middle of the ride caused my legs to complain a bit.

We definitely felt that we had been working hard by the time that we got back but the alarming thing is that the sportive has an extra 1000ft of climb in only an extra 10 miles and two of the climbs are steeper than anything we met today so more work is probably needed.  Hm.

I did take one picture on the way round but it turned out to be so dull that I didn’t have the heart to use it.  Fortunately there was plenty to look at in the garden when I got home.  It was really quite warm and pleasant today and the tulips spread their arms out to welcome the sun.

And the dog’s tooth violets had come on well. 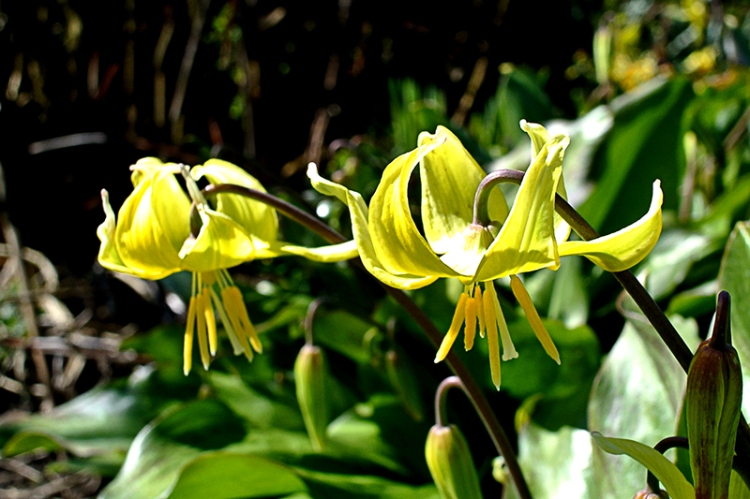 After lunch, I drove down to Longtown to collect two pairs of new glasses from the optician in the town.  It was such a lovely day that I took a walk round the Longtown ponds while I was there to test  my new pair of long distance spectacles.

I could see the ponds looking very green.

I could see flying ducks coming in to land on the river.

And gorse bushes glowing in the sun.

There were quite a few butterflies about but as usual they were hard to pin down.  One peacock butterfly did a little sunbathing on the track in front of me.

In the course of my walk, I saw three herons, one flying, one fishing and one doing some rather odd disco moves.

There were quite a lot of swallows about and several waterfowl too.  The swallows were too quick for me and the waterfowl stuck to the middle of the ponds so photo opportunities were hard to come by.  Here are a couple of shots which are representative of my efforts.

The new glasses were certainly letting me see quite a lot of birds but they also seemed to alarm them too as they either swam or flew off as soon as I approached.  I saw goosanders, oyster catchers, tufted ducks, coots, herons, mallards, curlews and even a lone lapwing but in the end I had to settle for snapping first some slower moving fauna….

…and finally some actually static flora.

I was pleased with my new glasses.  But even with my old gasses I wouldn’t have been able to miss the bridge over the Esk.  This is one of my favourite views.

When I got home, Mrs Tootlepedal had returned from making the final preparations for a group presentation at a WRI competition this coming Saturday and was back filling and painting the floor in the front room.  I am looking forward to seeing her design very much.

…before having my tea and going off to Carlisle with Susan to play with our recorder group.  We were just a quartet this week and enjoyed the music that our librarian Roy got out of his apparently inexhaustible big cupboard.  My second pair of glasses is set up to help me read music and look at computer screens.  They worked very well for the music but they are not so useful for a laptop as I am too close to the screen.  Perhaps I need longer arms.

This was the first really warm day of the year in our area and I felt that I had made good use of it.

The flying bird of the day is an oyster catcher from Longtown.  One of the many birds that flew off as I approached.