Today’s guest picture comes from my brother.  He has been a bit unwell lately and unable to go for his customary vigorous walks but he is recovering well and taking pictures in flatter places for the moment.  This is the ferry across Portsmouth harbour.  Mrs Tootlepedal and I took our bikes across on this ferry in 2008.

The very encouraging day yesterday turned out to be another false start on the road to warmer weather and we woke up to a familiarly cold, windy, grey day again today.

The change in the weather had brought a great tit into the garden, a very occasional visitor. 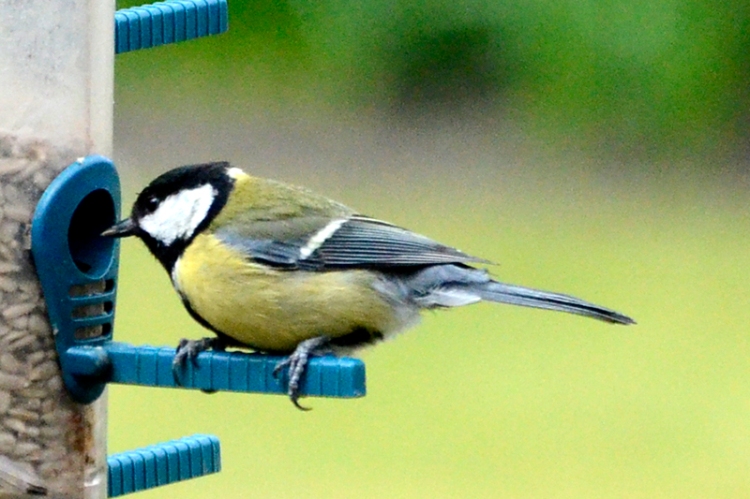 The chilly wind put paid to any thoughts of a little loosener on the bike and I entertained Sandy to a cup of coffee instead.  When he left, I put a week of the newspaper index into the database and did a bit of much needed flute and singing practice.  Mrs Tootlepedal’s mother is coming to stay with us for a couple of weeks on Sunday so she was very busy making preparations for this big event.

We had time for a brisk and chilly walk round the garden.  I took a couple of pictures of the walking wounded. 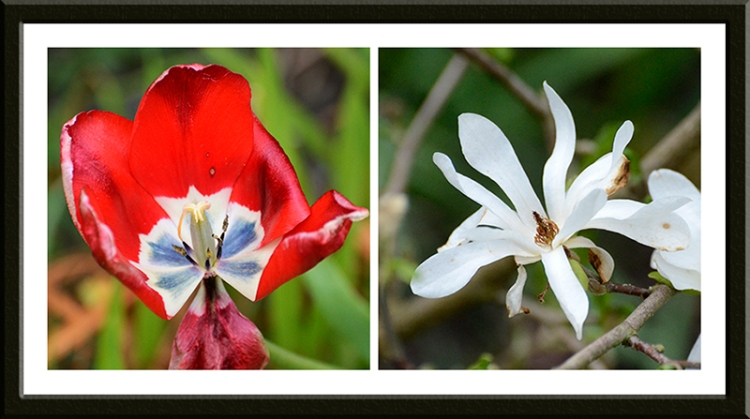 …and one of a new flower. 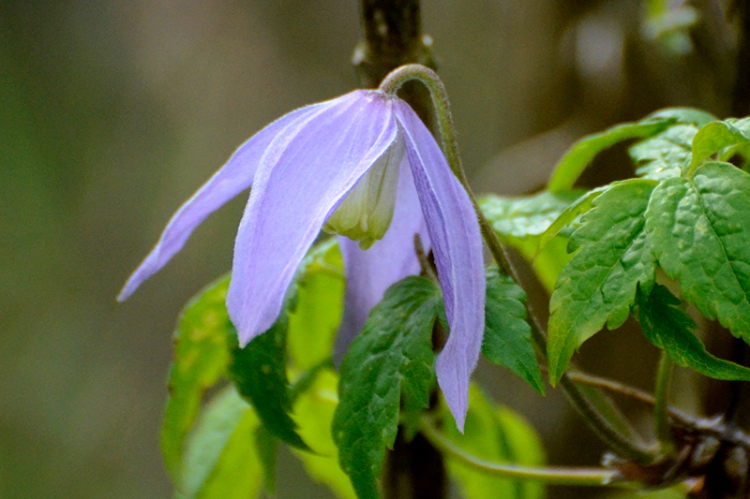 This is an alpine clematis Mrs Tootlepedal tells me.

There were still plenty of blackbirds in the garden but this one didn’t look at his best at all.

I made a bit of soup for lunch and afterwards, while Mrs Tootlepedal set about editing our local paper so that it would be ready tomorrow for the readers who produce an edition for blind subscribers, I went off with Sandy for a drive to Newcastleton with a view to doing a new walk over there.

Our route took us over the Langholm Moor and we were pleased to see plenty of interest including a female hen harrier and a merlin but chiefly a large group of wild goats, unusually close to the road.  We stopped.

It was a family group. Usually they would scatter if we got so close but for some reason they just continued munching away as we took pictures today.

An adult patrolled the skyline.

And an infant sucked its toe.

We drove on and parked in the village beside the river in Newcastleton.  Our walk took us over the new bridge across the Liddle Water.

I say ‘new’ bridge but in fact this is the third place in which it has been used.  The idea of a second or third hand bridge is quite strange to me but it kept us up very satisfactorily as we crossed it.

By this time the sun had come out and as long as we were sheltered from the wind, it was reasonably warm.

Newcastleton is one of the 7 Stanes mountain biking centres in the south of Scotland and the route we were following was partly on roads but mostly on specially built cycle tracks.  The road part of our walk was very beautiful, passing through deciduous woodland…

…which was carpeted by wild flowers in places…

…and picturesque at other times. 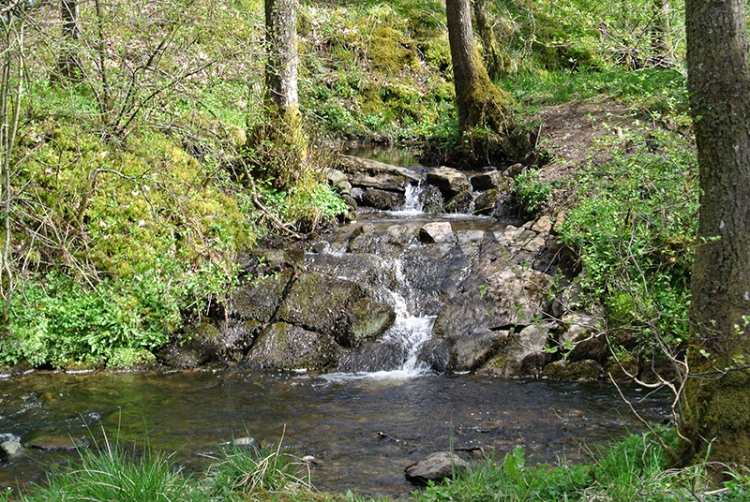 This part of our route took us through an outdoor activity centre with a big climbing wall, archery butts, a permanent orienteering course and a 300m zip wire.  Oh to be young again.

When we left the activity centre, we came to the cycle single tracks and followed the up hill trail.

A lot of work had obviously gone into building these tracks.  I think the the red dots on the trees in the right hand picture mean that they are due to be felled.  There is a balance to be struck between excitement and safety on these trails.

We were able to look back from time to time and enjoy the view across Liddesdale.

We walked about 2 miles from the car to the to the top of a ridge where we were able to look down to another car park beside a stream below us.

We will drive to this car park and start from there next time we come.

Our route back down the hill was on the return trail for the mountain bikers and we were very impressed by the control and daring they need to navigate the twists and turns at speed.

Luckily for us, there were no cyclists about or we would have had to look smart to get out of their way.  Mountain biking down these sorts of trails is a young man’s game though and the young men must have all been at work.  You see a lot of old men out riding road bikes but having seen these trails, it will amaze me me if any of these mountain bikers survive to be old men at all.

When  we passed through it on out way down, the adventure centre was in full swing with children abseiling down the climbing wall, trudging up streams while ducking under logs and getting lost on the orienteering course. Our calmer walk back down the hill was soon accomplished and we crossed the Liddle… 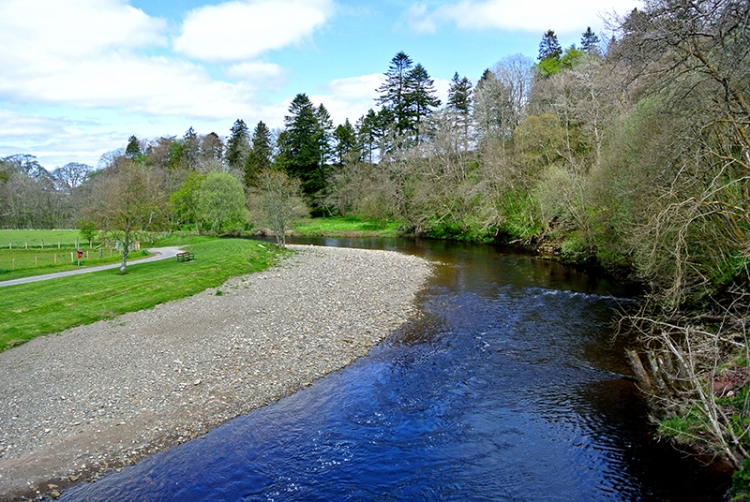 …got in the car, and drove back across the hill to Langholm.

To our surprise, the goats were still beside the road and as this may be the best chance we will ever have to see them so close, we stopped again. 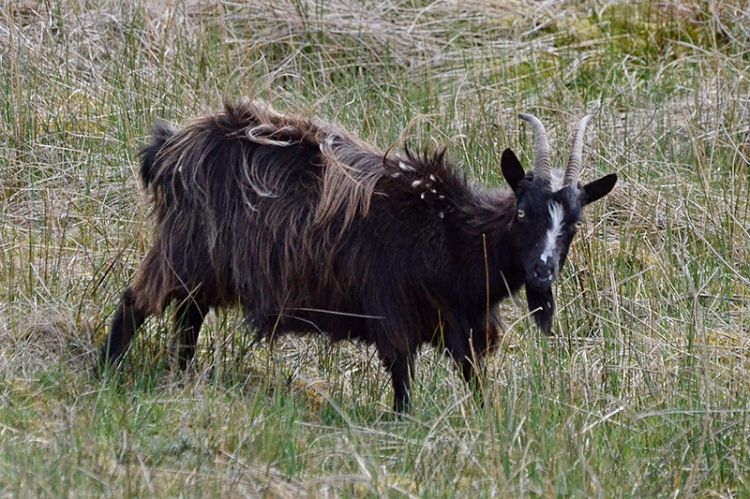 The family group were busy feeding in the long grass.

We added to our collection of things seen with another merlin and a male hen harrier.  Neither was in photographic range by the time we had stopped and got a camera out but it was good to watch them anyway.

We both agreed that it had been an excellent outing.

After tea, Mrs Tootlepedal went off to Ewes for a WRI meeting and Sandy and I met again and went to the Archive Centre.  While I had a successful time with an excellent internet connection at putting the newspaper index into the database, the other computer, which Sandy uses, seems to have died and he had a rather frustrating evening not getting his tasks done.

We consoled him with a glass of wine.

Mrs Tootlepedal and her colleagues had entertained the WRI meeting with their prizewinning radio presentation and she came home with the handsome trophy which she will hold for a while before passing it on to another team member.

The flying bird of the day is a rather token view of the female hen harrier which we saw as we went over the hill to Newcastleton.

23 thoughts on “Getting my goat”