Today’s guest picture comes from my neighbour Gavin who is on a walking holiday in Norfolk. His picture shows a working windmill in the village of Weybourne, which they came to at the end of a ten mile walk. 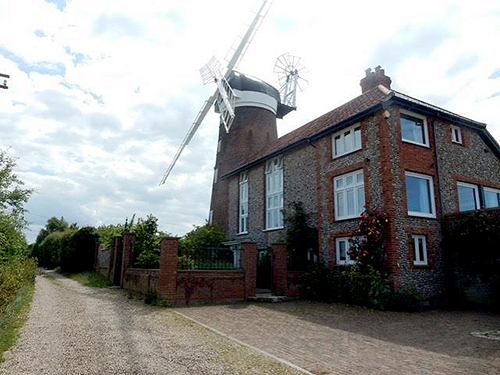 We had plenty of wind to spare here today but as the thermometer was showing summer temperatures at last and the skies were largely blue, we didn’t mind a bit of breeze at all.  We are having a visit from my eldest sister Susan for the next few days so the morning was spent in preparation for this welcome event.

There was time for a little garden wander too of course.

The first of the delphinums has come out. They have generally been quite modest in height in the cool weather this year but this one is towering over Mrs Tootlepedal. 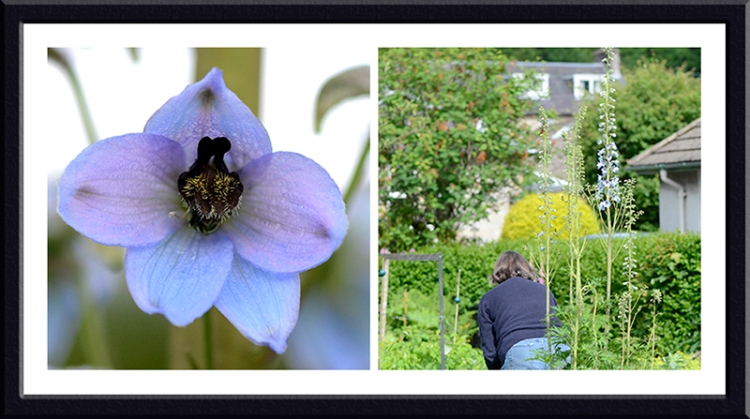 Lilian Austin has appeared in all her glory.  This is one of my favourite roses. 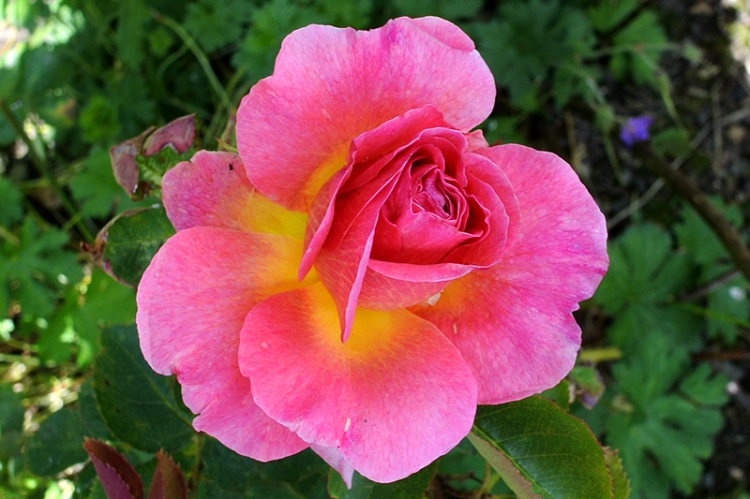 What do you get when an oriental poppy sheds its petals? The icing on the cake. 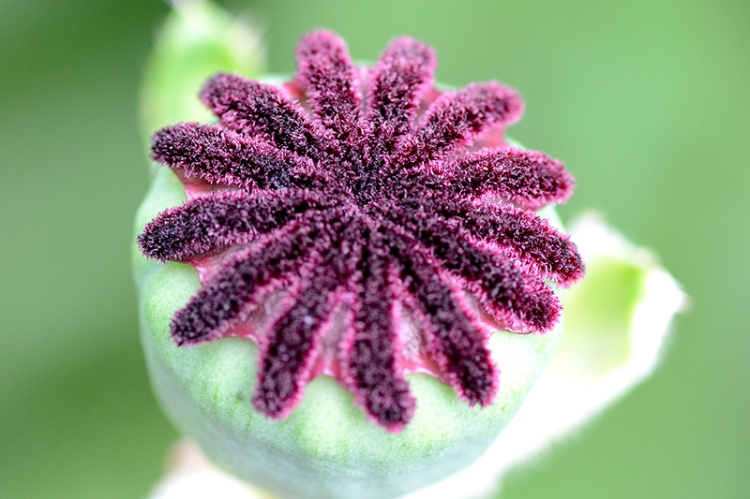 The intrusive camera reveals that the tiny individual florets on an astrantia are each apparently grown on a set of pipe cleaners. 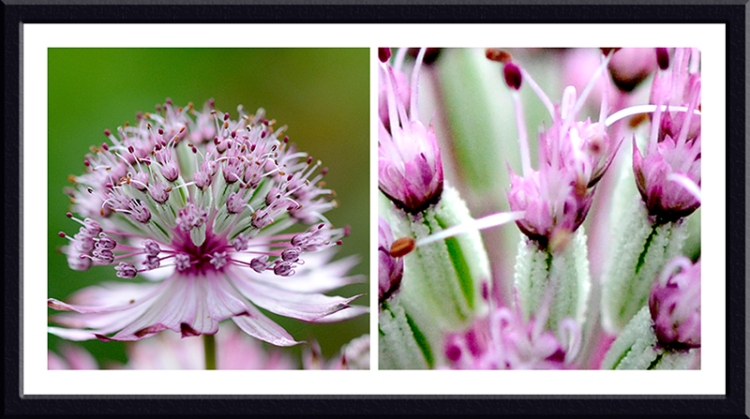 The complexity of some flowers is a wonder to me.  The bees just get stuck in.

Mrs Tootlepedal went off to do some shopping and I popped out on the fairly speedy bike to try to cycle fifteen miles in an hour.  I managed it  with about 10 seconds to spare.  On my way, I had another chance to enjoy the very smooth new surface on the road to Cleuchfoot and this had the added bonus of a gate at my turning point. 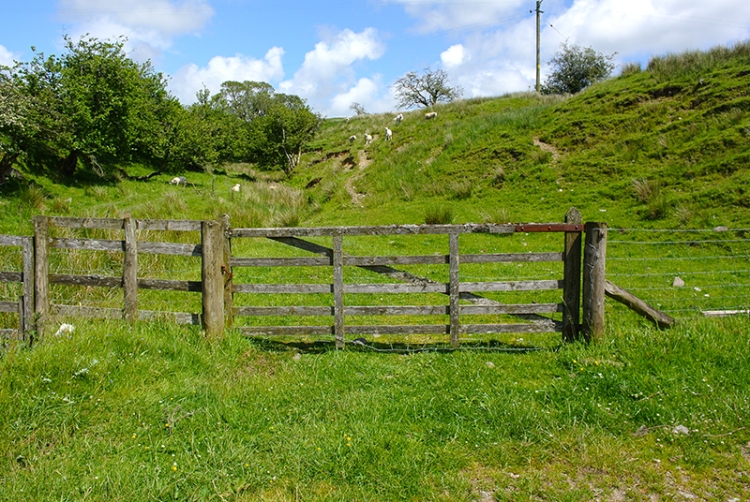 When I got back, I had some time to sieve a little more compost and consider how best to treat the middle lawn.  There are always options.  I might be trying scarifying, buck-u-uppo, weed and feed, mowing or watering…..they all have their pluses and minuses and after quite a bit of cogitation and weighing up the options, I decided to do nothing at all.

The birds were very active at the feeder all day and there was often keen competition for a place at the table. 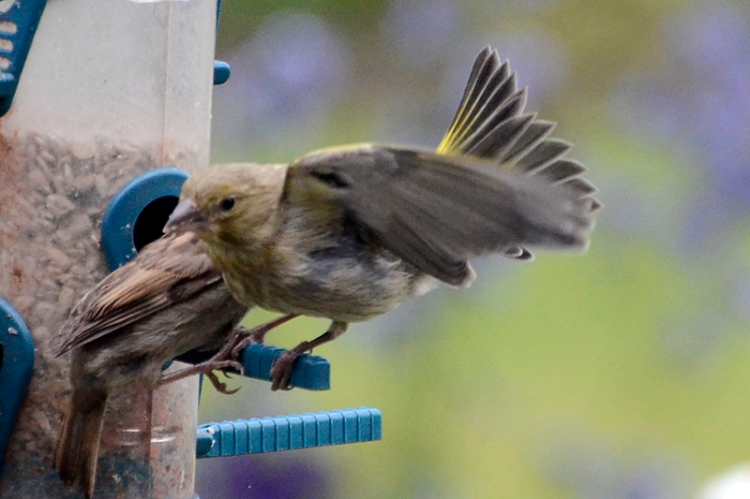 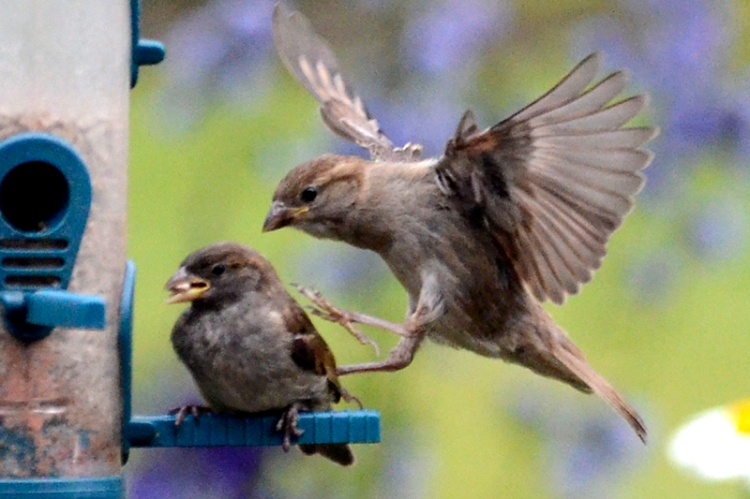 In fact so heavy was the traffic that I didn’t realise that we had been visited by a redpoll until I noticed it at the very top of the picture below when I looked at it on the computer. 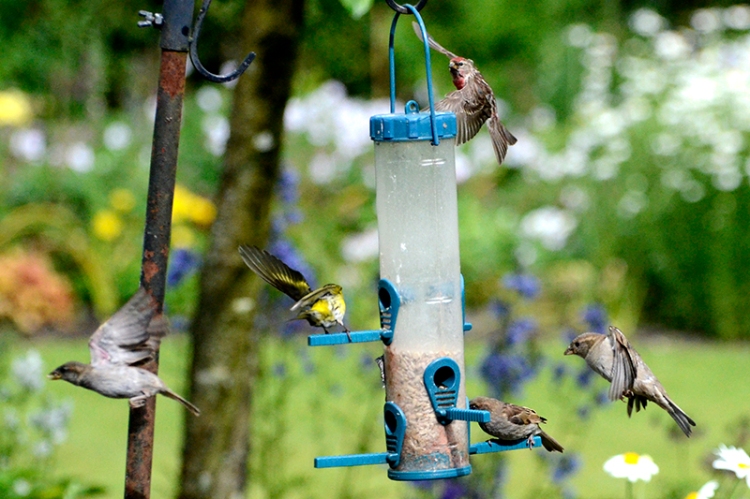 Instead of lawn care, I had another garden wander..

Mrs Tootlepedal was filling up the pond with a little fresh water and this had brought a small army of tadpoles out above the weed to enjoy the sunshine. 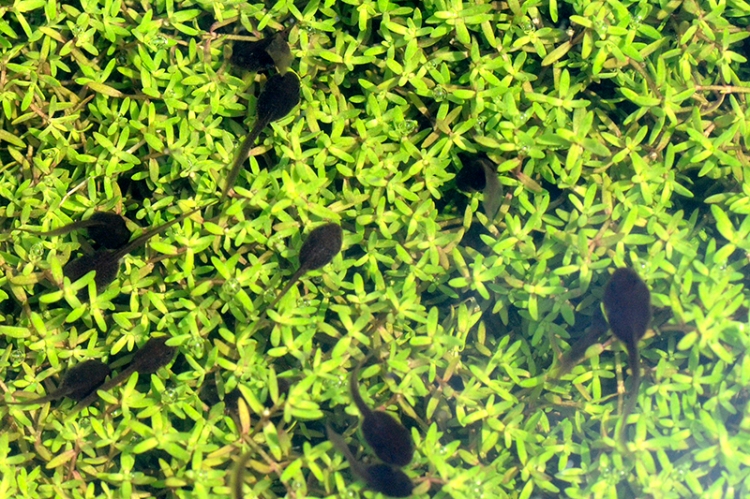 I don’t know whether this is a fresh batch or whether they have just been sulking in the bottom of the pond during the cold weather, refusing to develop.

The irises behind the bench are beginning to go over and I took this last shot to say goodbye to them. 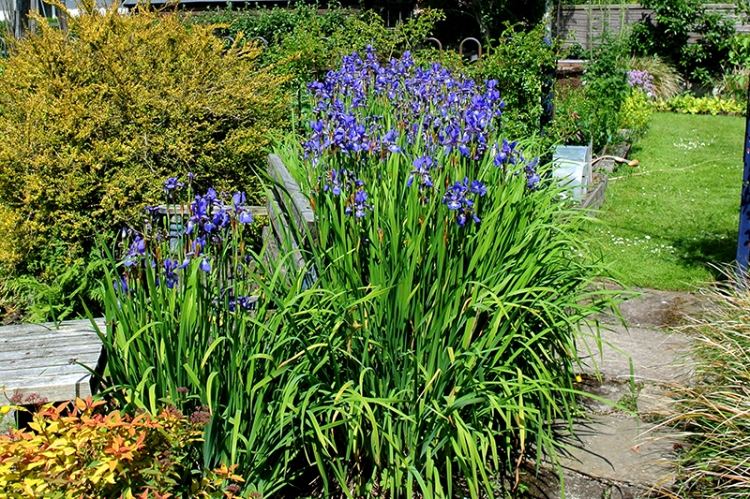 As they go, a very showy clematis is appearing nearby. 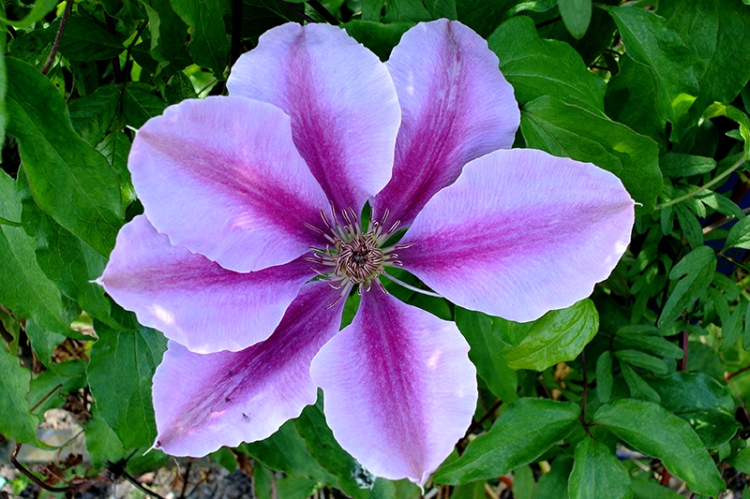 And we have had the first sighting of Crown Princess Margareta too. 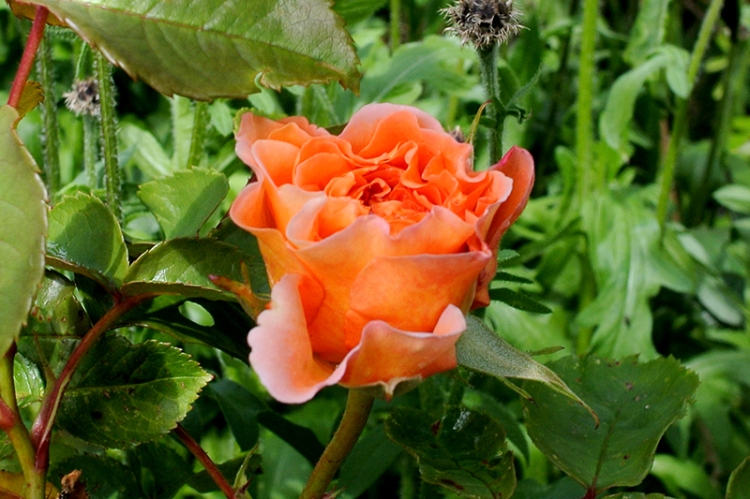 I finished off my wander with a close look at a pink. 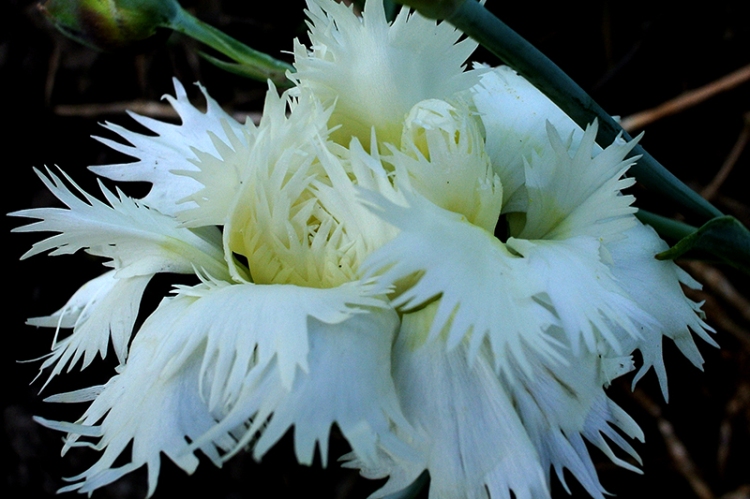 It looked to me like a stylised depiction of doves in paper collage.

The business of the afternoon was going to Carlisle to pick up Susan from the station.  This should have been quite straightforward but we were not far from the station when we received a rather curious text message to say that she was delayed and had only  got as far as Preston.  I tried to ring her but I couldn’t get through. This left us with an hour to kill so we turned back and went to a nearby garden centre where we purchased a few useful things and some cheese from the expensive farm shop.

After a cup of coffee, we went on to the station but couldn’t find any mention of her train at all.  Luckily a gentleman standing near as we quizzed an official told us that his daughter was on the train and the passsengers had been decanted at Preston and were now on the next train.  Susan arrived on this second train an hour and a quarter after she should have been there but she had borne the delay with equanimity and we were pleased to finally see her so we drove home quite cheerfully.

The situation had been made more difficult by the fact that neither her nor my mobile phone was working.  The curious text message had been sent by a helpful young man on the train. As we had both received and installed updates this morning, we assumed that that was the cause of the difficulty  but when I looked at my account on line, I found that the company has not deducted my most recent direct debit from my bank account and is claiming that I owe them money.  I foresee tedious times ahead on the customer service line tomorrow.

Still it is very good to see Susan and catch up on all the family news. 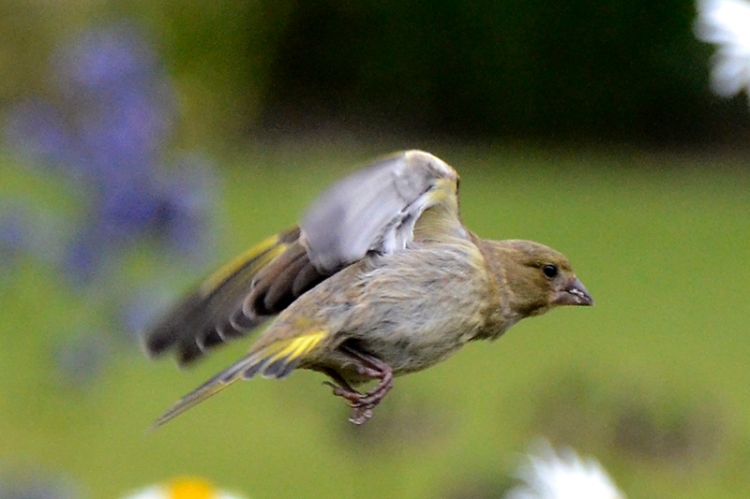 31 thoughts on “Better late than never”