I am posting three times today to catch up with our outing of yesterday so I apologise for taxing the patience of readers beyond the usual.  The reason for the triple post is that we took our daughter to see two very interesting sites in central Scotland as well as visiting her two brothers while we were about it.  Seeing two members of the family in one outing is known in our family as ‘knocking off the rellies’ and combining that with the Falkirk Wheel and the Kelpies made for an outstanding if tiring day.

This first post deals with the Falkirk Wheel and there will be one for the Kelpies and then a standard diary post at the end of the day.  Please feel free to skip without causing any offence at all.

The Falkirk Wheel or two swallows do make a summer.

The trip to the Falkirk Wheel started with a visit to our local petrol station to fill up and a loud cheeping alerted me to a young swallow sitting on a wire behind the car.

This was a good start to the day and very light traffic on the motorways meant that the 100 mile journey north passed very quickly, the only  fly in the ointment being a loud squeak from the nearside  back wheel as we got near Falkirk.

The Wheel was well signposted and the car parking was free.  The Wheel is an ingenious (and enormous) device for lifting canal boats from the Forth and Clyde Canal to the Union Canal, a job that used to be done by a staircase of eleven locks. It was built as part of the Millennium celebrations at a time when there was plenty of money sloshing about.

From the car park, we crossed the Forth and Clyde Canal…. 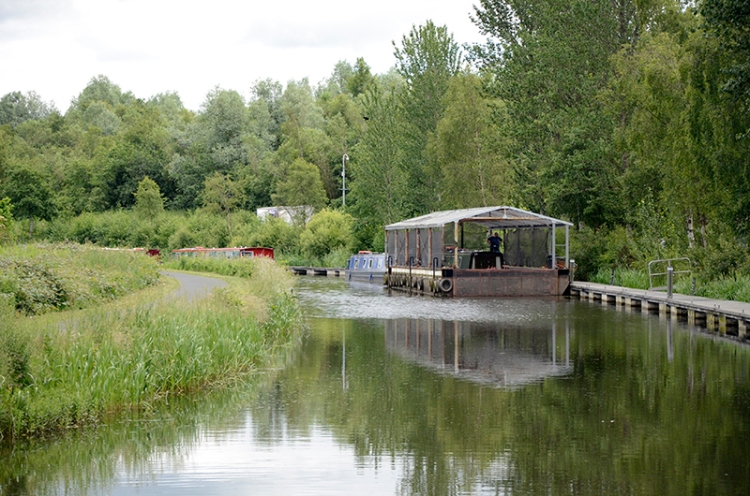 …and climbed a short hill to the basin for the Wheel.

The Wheel towers over the basin and reaches up to an aqueduct leading to a tunnel and a second basin on the hill behind.

The Wheel has two large buckets….

…which hold the boats as it gently rotates taking one form the top to the bottom and the other from the bottom to the top simultaneously.

In the series above only one bucket has a boat in it but this does not upset the equilibrium as the other bucket is filled with water and the weights are exactly equal whether there is a boat in the bucket or not.  So well balanced is the wheel that it only takes enough energy to boil 6 kettles to turn it through a semi circle.

An ingenious mechanism keeps the gondolas level as the wheel turns.

There are short boat trips available which take visitors onto the wheel….

…and up to the aqueduct and through the tunnel…. 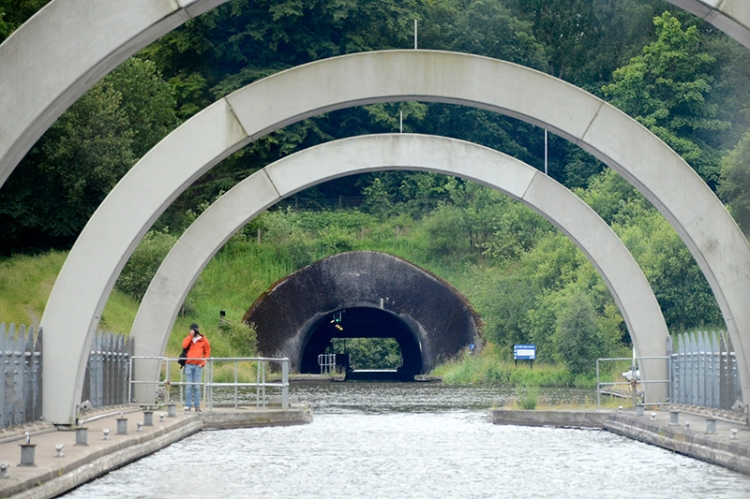 …to a small basin at the foot of two conventional locks which take boats onto the Union Canal towards Edinburgh.

The boat turns in the basin and heads back to the aqueduct….. 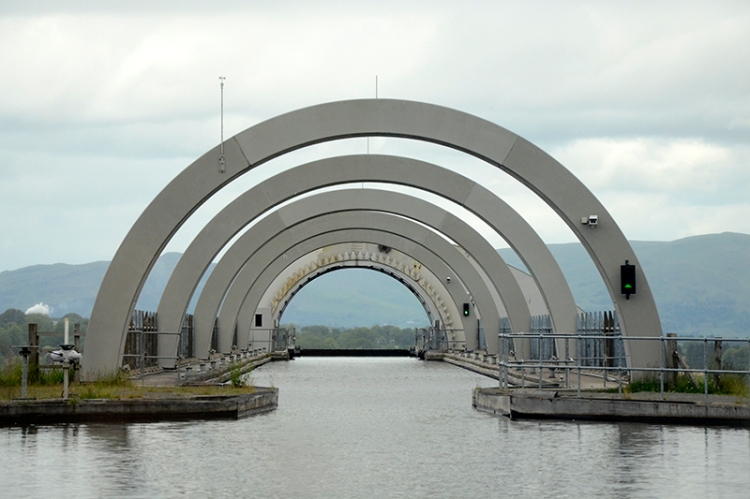 …giving a wonderful view of the surrounding countryside and a slight frisson to the nervously minded as they approach a sheer drop at the end of the aqueduct.

As the boat is going at 1 mph the frisson is very slight.

An ingenious set of rams and blocks….

We took the trip as you can tell but if there was was one disappointment for me in the whole visit, it was that it was very difficult to take any pictures unless you were in the front seats and we were just too late to get these.

The area surrounding the basin has been well designed and there were wild flowers….

…fun for children or all sorts, very calm swans…..

…and an excellent cafe so it was not surprising to find that the boat trips were fully booked and the whole scene was humming with life.

There was even a flying bird of the day.

If you get the chance to visit the Falkirk Wheel, take it, as my pictures don’t do justice to the place at all.

33 thoughts on “The Falkirk Wheel”