Today’s guest picture was sent to me by Mrs Tootlepedal and shows Matilda honing her literary skills in Edinburgh yesterday.

The picture of Matilda was by far the brightest feature of the day.  It was raining steadily when we got up and it rained for  most of the rest of the hours of daylight.  The light was terrible and I only took two photographs all day. 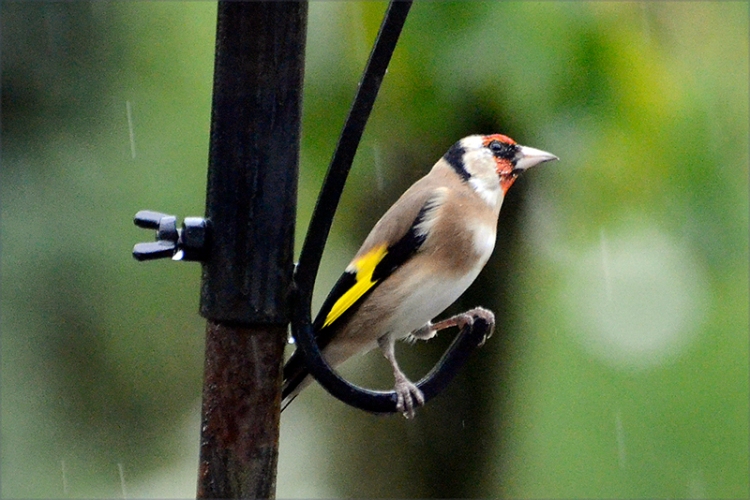 The goldfinch looked remarkably unruffled by the rain though.

I used the wet weather as an excuse for a very quiet day and did two crosswords and put a week of the newspaper index into the Archive Group database  slowly enough to fill the entire morning.

In the afternoon, I plugged away at preparing a practice file for one of our Carlisle Choir songs and it became apparent when I tried to sing the tenor part, that I will need a good deal of practice if we are going to sing it in a concert so it was time well spent.

I was going to make another set of Chelsea buns in the hope of producing a more presentable product than last time but Mrs Tootlepedal suggested that I should try for a tea cake instead.  I tried.  This turned out to be a mistake and the results were even less presentable than the Chelsea buns and not quite so tasty.

They weren’t too bad though as they all seem to have disappeared.

In the evening, the rain had stopped and we went off to sing with our Langholm choir and it became obvious that I need to practice some  songs there which I thought that I had mastered.

There is hope of some better weather later tomorrow but it would have to try hard to be worse than today.  On the plus side, it has been pleasantly warm for the time of year so I suppose we should be grateful for that.

The flying bird of the day picture is as bad as the weather was when I took it.

25 thoughts on “Washed out”