Today’s guest picture shows a very striking bald eagle which Fiona, my Newcastle correspondent met.  I expect that she had her children with her too.

Like yesterday, it was a day of sunshine and showers again today which made planning a bit of a lottery.

I was busy in the morning making sour dough bread and slow cooked beef stew, followed by a visit for coffee from Dropscone.   In a mentally dislocating manner, he had brought Friday treacle scones with him although it was Monday.  They tasted just as good though.

…but didn’t discourage the birds from coming  to the feeder….

…although several visits by the sparrowhawk during the day did discourage them.

The birds return remarkably quickly after the hawk has gone.

We are running an equal opportunities feeder here.

In between showers, I wandered round the garden.  The ripples of spring are apparent.

However, there is definite progress on the frog front.  The adults have gone but the tadpoles are showing wriggly signs of life.

There are daffodils on all sides and they should be in their full glory soon.

The primulas are working hard…

…and the prize goes to this bunch which Mrs Tootlepedal transplanted recently and which are obviously happy in their new home.

My back is rather sore at the moment, probably because of the exercises that I am doing to help my hip so I am going to give up the hip exercises for a while and see if things improve.  It will be rather annoying if I can’t do the hip exercises as they have been very good value.

The sore back made me choose a cycle ride after lunch rather than a walk.  Dr Velo is very good on back pain and not only makes it go away while you are cycling but also lessens it after you have stopped.

I tried to find a moment when the sun was shining and it wasn’t raining and I was largely successful as I was only rained only once and for a very short time at that.  I couldn’t do anything about a brisk wind though and struggled out for ten miles at just under 10 miles and hour into the wind and floated back at 17 mph with it behind me, whistling popular airs as I went along.

Because of the wind, I was happy to stop for a photo or two on the way out.

I went look for an alder tree to see if I could see a male catkin and a female flower.  The catkin was easy enough but the female flower needed a calmer day and a steadier hand.

I noticed a very colourful rock on a wall and wondered if it had been painted.  It had….but by nature not man.

I thought that it was worth a closer look.

The pattern of sunshine and showers continued and as I was sitting at the computer sifting through the day’s pictures after the pedal, I heard the rain and saw the sun.   That meant one thing and I rushed upstairs. 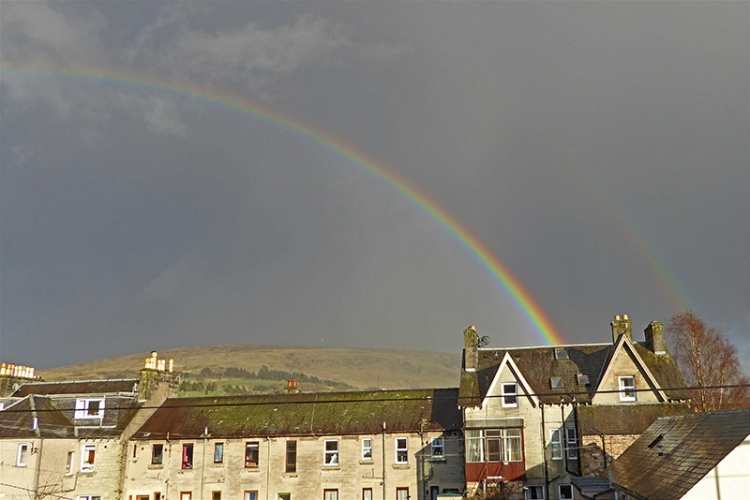 I needed a wider angle lens to catch the whole bow.

I moved along and saw the end coming right down to the ground.  Someone in Caroline Street must be the happy owner of a pot of gold.

I would have liked the picture better without the wires across the middle.  Photoshop obliged.

In the evening, I went across to Lockerbie to collect Mrs Tootlepedal from the station there.  Once again sunshine and showers came with me and the drive was a visual treat and a pothole nightmare at the same time.

Coming back with Mrs Tootlepedal, the rain stayed off and with the sun now behind us, I could see the potholes earlier so I had more time to enjoy the light, at first golden and then pink as the sun set.

The stew turned out well, the bread less so but as I have Mrs Tootlepedal back home, nothing can mar my sense of contentment.

The flying bird of the day is that persistent sparrowhawk, making off with empty claws, (not a brilliant picture but a welcome change from the incessant chaffinches).