I am glad to have another bright guest picture, this one of Regent’s Park taken by my sister Mary on her way to tennis this morning, as we had another photo unfriendly grey day here.

The day turned out to be better than expected though in spite of its greyness and an unsettling start. 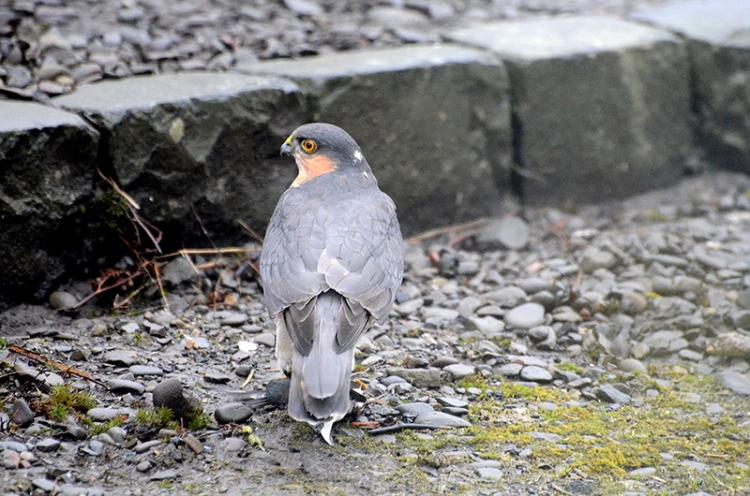 …and what you can’t see in the hurriedly taken picture is a second chaffinch just in front of the hawk, frozen stiff with fear and unable to move.  This allowed the hawk to deal with the first capture and then spring forward and nail the second bird too.

With so many visits from the predator over the last two days, I took down the bird feeders and tucked them away, feeling that I was exposing our visitors to unnecessary danger.  However, when I looked out of the window later on, the plum tree was still full of birds and the ground below the feeders still had a crowd searching for fallen seeds.

Thinking that they might as well get fed while waiting to dodge the hawk, I put the feeders out again and by coincidence, didn’t see the hawk again all day.

…as one of the siskins, normally very neat fliers,  nearly missed the perch altogether.

I went off to the producers’ market in the Buccleuch Centre which as usual flowed with fish, cheese and honey.   I am hoping to get some shots of windmills being delivered to a new site along the Wauchope road but the lady who sells meat at the market and who lives on the route tells me that they are being brought in between six and eight o’clock in the morning.  This may be beyond my capacity for early rising.

Sandy is much improved and came round for coffee under his own steam which was very welcome.  The forecast was for heavy rain all day but it was still dry by the time that he left so I got the fairly speedy bike and set off in the hope this happy state continuing.

It started to rain lightly as soon as I left the house though and by the time that I got to the top of Callister after six miles, it had become a steady downpour and I turned for home.  It was quite warm and calm so the rain was not as troublesome as it is on a cold and windy day.  When I got back to Langholm, it had dropped down to a very gentle drizzle again so I rode straight on through the town and out of the other side.  In an annoying fashion, when I got to to about the six mile marker on this road, the rain started to come down heavily so I turned for home again and this time, it kept on raining so I stopped when I got back to the house.

The birds were still coming to the feeder and the common enemy hadn’t engendered a feeling of togetherness at all.

I thought that the birds waiting in the plum tree were keeping a more wary eye out than usual. 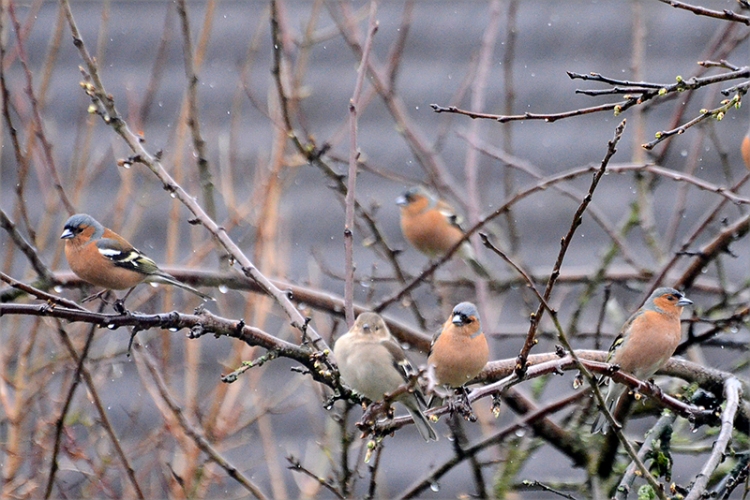 The rain continued until well into the evening and I spent the afternoon indoors, putting a week of the index into the Archive Group database, stumping about in a bored manner and generally not helping.  I did make one foray into the garden with the camera stuck up my jumper to check whether a patch of brightness under the walnut tree was a Forsythia in bloom.

I was quite excited by a tulip too..

Fortunately a game of rugby turned up on the telly to help me pass the time and when it was over, I was in a better mood and it was time for tea and an outing.

We had received a flier telling us of a ‘Big Music’ night to held in the Masonic Hall to raise money for local charity fundraisers.  ‘Big Music’ nights had been a feature of town life twenty five years ago when they had been good fun.  The organisers had spread far and wide over the years and the nights had vanished from the scene with them.

The ‘Big Music’ nights were open to anyone who wanted to come along and sing, play or just listen and my daughter and I had played in several of them between us so Mrs Tootlepedal and I were interested to see whether the magic had lasted.

It had.  It was good to see old friends again and listen to an interesting programme of singing and playing.  It went so well that people thought that it may be possible to have another one in the future and if it is, I hope to be able to play.

The rain had stopped by the time we came out so we rounded off a far better day than we had expected by walking home in the dry.

The flying bird of the day is a chaffinch seen through the gloom.

40 thoughts on “A blast from the past”