Today’s guest picture shows the sea front at Ullapool where Sandy is spending a few days with friends.  When the weather is like this, it is hard to find anywhere more beautiful than the north west coast of Scotland. 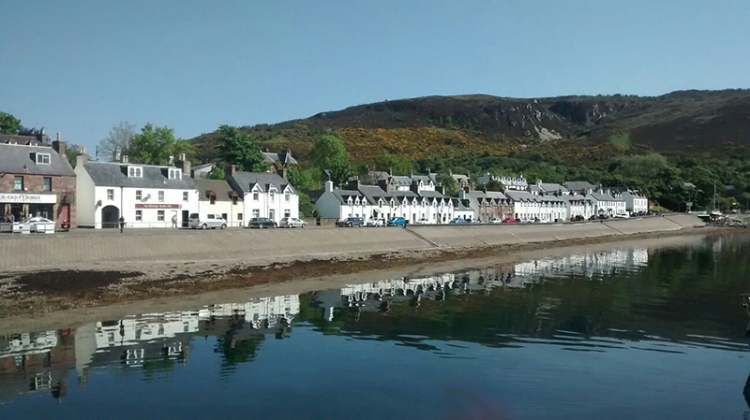 We had another fine day here today but it was, if anything, a little too fine.  The wind had gone round to the south west and had little or no intention of cooling anyone down.   The temperature was up to 24°C by lunch and the humidity had gone up for most of the day.  The result was a series of thunder rumbles in the afternoon but at the time of writing, no actual thunderstorms.

All this made for a rather heavy day and although I thought of cycling,  I also thought about melting tar, recent gravelling and potential heatstroke so I didn’t go out.

I did pop out into the garden at regular intervals both to do useful things….

…like hedge trimming and lawn mowing and weed killing.

The warm weather has brought on a host of weeds in the middle lawn.  Usually I don’t weed kill because it means that you have to collect and throw away the grass trimmings but there were places where the weeds were threatening to overwhelm the grass so there was no choice.

These things were interspersed with spells indoors.  Our house is quite cool in these conditions so I adhered to the golden rule: If you can’t stand the heat, go into the kitchen.

I also took the camera out from time to time but very bright sunshine is not ideal for flower photography (some people are never happy) so the results were a bit mixed.  Strangely there was no sign of the painted lady or any of his/her friends today.

There were new reds….

…and old and new yellows.

And lovely smells on every side.

There were comings and goings.

The Astrantias are coming along nicely.

And the lupins are almost at their peak.

Recently we have been visited by what sometimes seems like an army of sparrows and there were plenty to more to watch today.  The reason for the great number is some very successful breeding.  Little sparrows flapping their wings in a pleading way are to be seen on all sides. 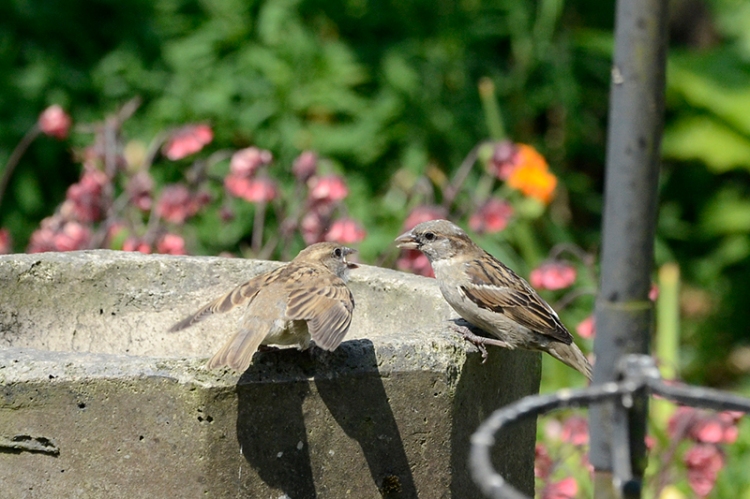 At first there was one…. 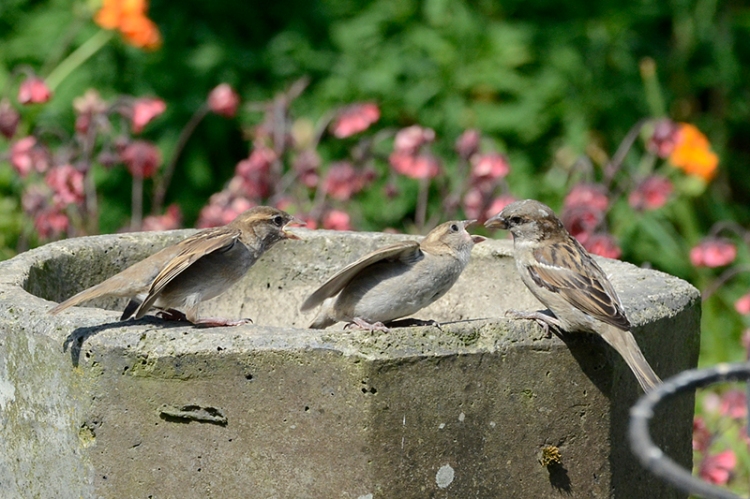 …who looked really hopeful…..and then they all flew away and one lucky child got special treatment later. 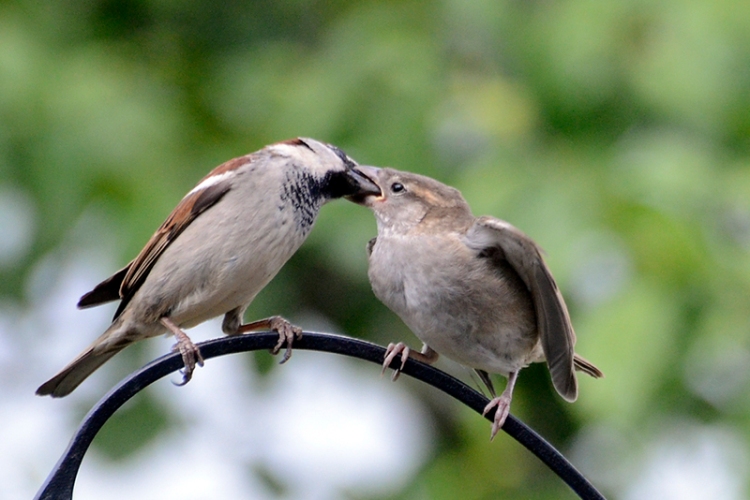 I saw the first goldfinch for several days.  They have become very scarce and there are more redpolls than goldfinches at the moment.

One of our residents is getting more and more shy. 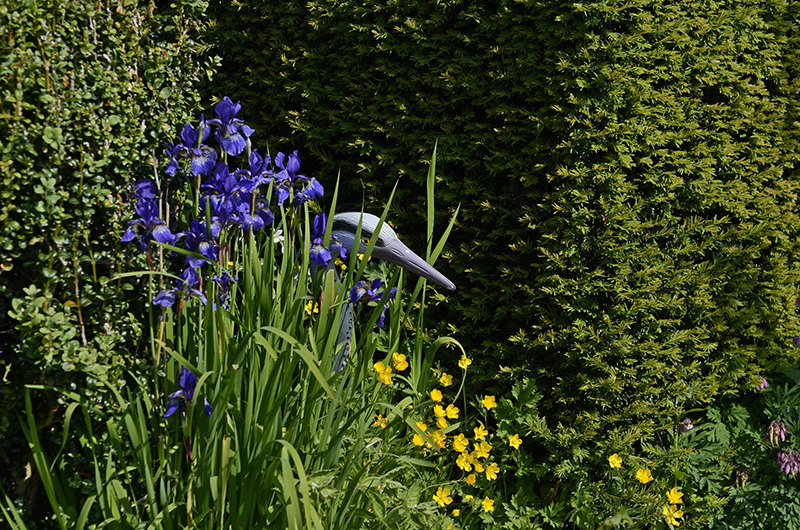 It got hotter and hotter as the day went on but Mrs Tootlepedal had plants that badly needed planting out so she kept busy.  She was putting in cosmos plants and the weather has been so good lately, that some of them are in flower before they have been put in the beds. 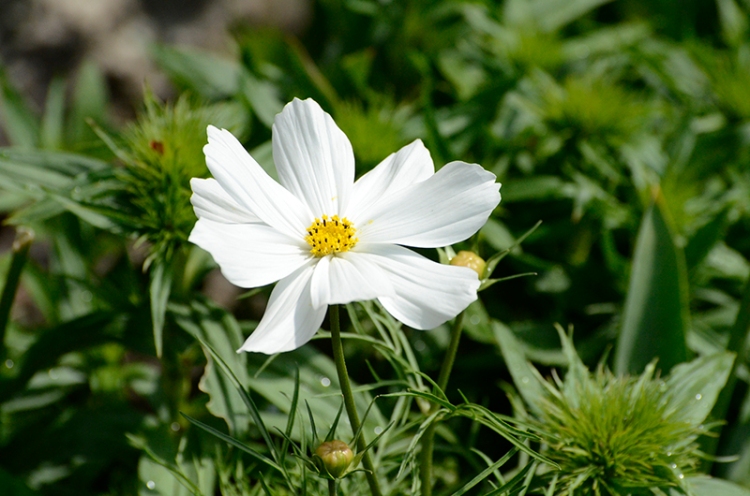 I sieved a little compost.  The dry weather has made this task very easy but I needed to put some water on the heap in bin C as it was in danger of drying out completely.

In a quiet moment, I had a word with the power company about my outstanding unresolved complaint with regard to the supply to the Archive Centre and unintelligible billing.  They are a month late in a promised reply.  It turned out that this was because the complaint had been marked as resolved.  How could this be when I haven’t been spoken or written to?   The answer came: “The computer has done it.”  I intimated that this was not and entirely satisfactory response and that I hoped the matter might be resolved before my death.  The customer service operative made no promises.

I was cheered up when my flute pupil Luke came in the evening and we started work on a duet for two flutes in canon by Telemann, which will be an enjoyable challenge for us. His music reading is improving all the time so we don’t need to spend nearly as much time as we used to in getting familiar with a piece and can get down to playing it seriously much sooner.

In the evening, I went off to play trios with Mike and Isabel and there were moments after such a hot day, when my music reading left a little to be desired but we had another enjoyable evening of music all the same.

There are two flying birds of the day today, a standard siskin…. 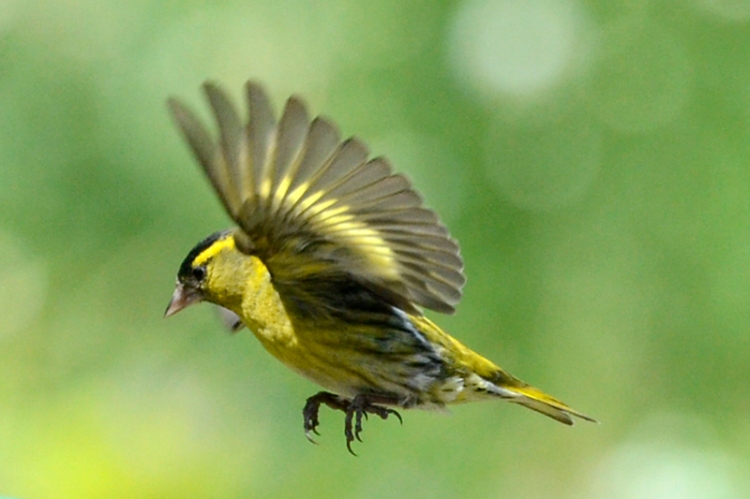 …and a snatched shot of a swift disappearing as it swooped over the garden in the morning.