Today’s guest picture comes from a Canadian correspondent, Mary Jo.  She thinks perhaps their weather is worse than ours by some way and if the evidence of a chokecherry  tree blown over is anything to go by, she is quite right.

We were promised some wet weather here today but like so many promises recently, this turned out not be the case and the rain has been postponed until tomorrow.  In fact, the day turned out to be pretty good, if rather windy.

It didn’t matter to me in the morning as I was in the Information Hub on the High Street but not giving out information as there were no visitors asking for any.  Luckily there is plenty to read in the newspapers at the moment so I put the two hours in without getting bored.

Once I was back home, it seemed like a good idea to do as much work in the garden as we could while it was still fine so I did quite a bit of mowing before lunch and after lunch, Mrs Tootlepedal and I finished the trimming of the box balls round the front lawn.

After all the recent hedge and ball trimming, there was a heap of cut stuff to be dealt with so we got the petrol shredder out and put the whole lot through it in quick time.  Most of the result is resting comfortably in compost Bin A now.

Once this task was over, I had time to wander round the garden looking at flowers. They were enjoying the sunshine too.

The Icelandic poppy on the right was looking particularly cheery so perhaps it knew what was going to happen later in the day.

There are a lot of Martagon lilies getting ready to flower and this one was the first in the race. 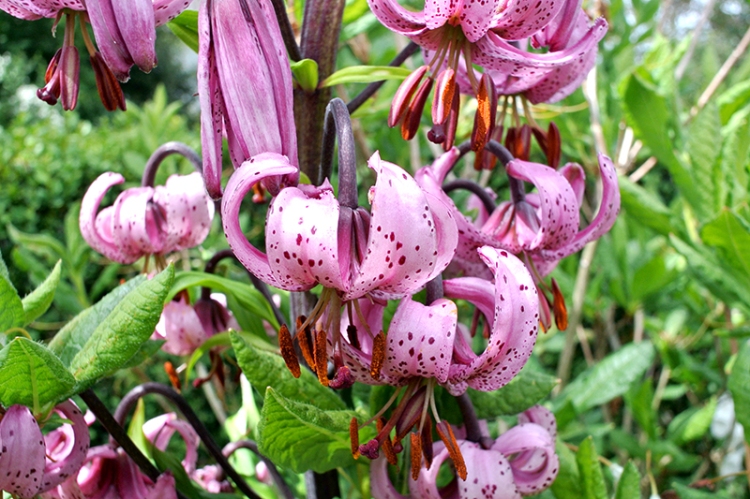 As well as our large ox-eye daisies, we have a clump of smaller daisies too.

And if you want even smaller but perfectly formed flowers there is a Cotoneaster in the back border which provides just that.

The pushing of the mower and the bending and stretching with the trimmer was more than enough exercise for the day and a short rain shower, just as I might have been considering a walk, confirmed that watching Wimbledon on the telly would be the best thing to do so I did it.

I did find time to look out of the window as well.

…as were the sparrows.

Other birds took on the role of spectators.

The jackdaws were interested in the some peanuts which I had put out on the bench beside the feeders.

In the evening, I inadvertently found a channel that was showing the England vs Iceland football match in the European Championship. I hadn’t meant to watch the game but in the end, I watched enthralled as highly paid players failed to pass the ball to each with any great precision or purpose and when they did get near goal, managed to kick the ball anywhere but in the direction of the  net and this let plucky Iceland (pop 330,000) beat England (pop 53,000,000) by two goals to one..

These things happen but at least the footballers can console themselves with the thought that they have managed to get out of Europe a lot more quickly and cleanly and with less fuss than the politicians are going to be able to do.

On an incidental note: since Iceland had beaten the Czech Republic, Turkey, Holland and Latvia in the qualifying rounds, perhaps the result should not have come as quite such a surprise to the expert commentators as it seemed to.

The flower of the day is the Lilian Austin rose, at its most expansive just before the inevitable decline sets in.

And the flying bird of the day is one of the busy siskins.