Today’s guest picture comes from the camera of Mrs Tootlepedal.  She took it at the flower show in Birmingham which she went to with our daughter last month. 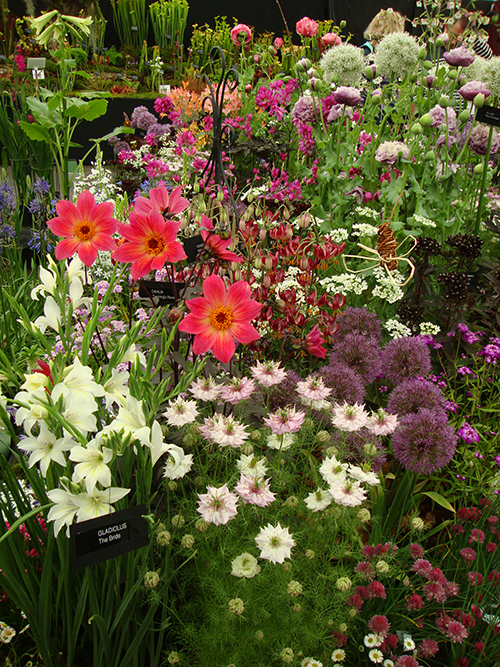 The plan for today was to leap up early, jump on the bike and get a good distance in before the forecast rain arrived and the wind got up.

It was a good plan and started well.  I leapt out of bed good and early and had breakfast but then things went a bit pear shaped.  I  footled around, finally got ready to pedal and just as I was going out, it started to rain.  I went in and did the crossword until the rain stopped and then got going.  It was still only half past nine but this was a lot later than the plan.

As a result of the late start, the wind was blowing in my face as I pedalled up the Wauchope road and although the view behind me looked sunny enough, the view ahead was ominously cloudy. 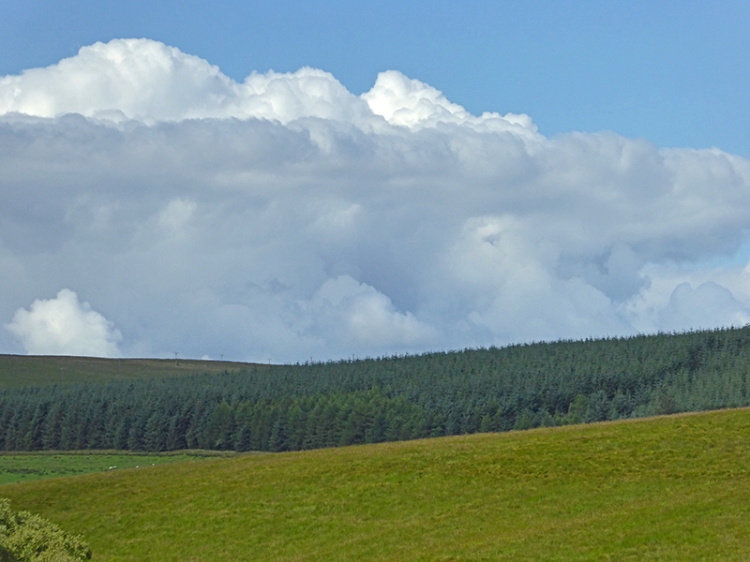 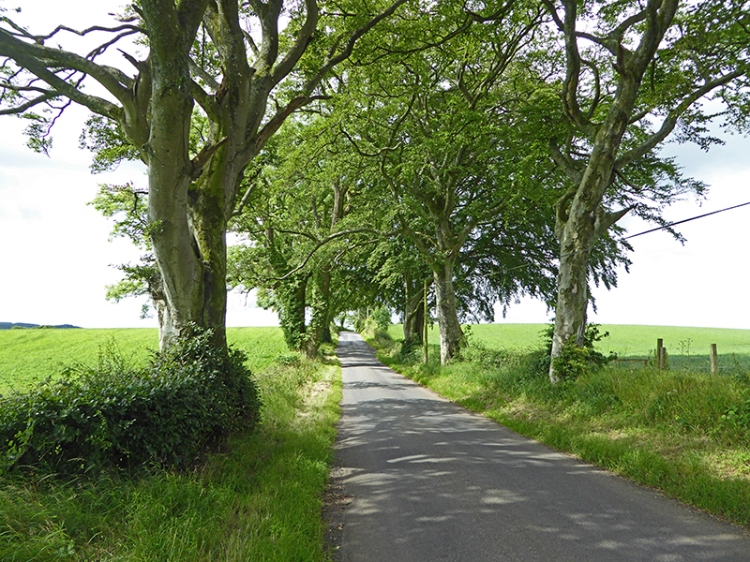 …though the sky ahead looked very grey.

My route passed through fields of grass being cut for silage… 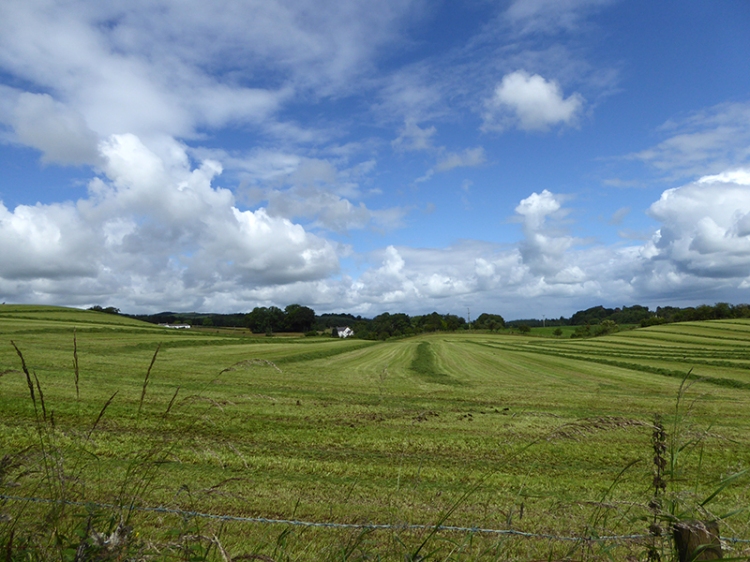 …and I was able to laugh in the face of grey clouds ahead as I was headed for the Art Café at Dalton Pottery where I could stop for refreshment and allow any passing shower to pass.

Ah, but the best laid schemes o’ mice and men… 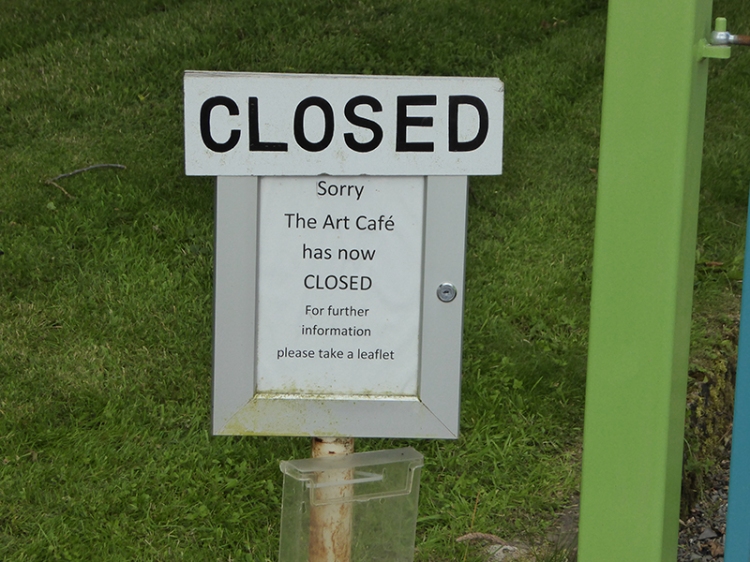 There was nothing for it but to pedal on.  The roads as I headed down to the Solway shore were damp so at least I had missed one of the showers.  Instead of the Art Café, I visited the church at Ruthwell for my lunch. 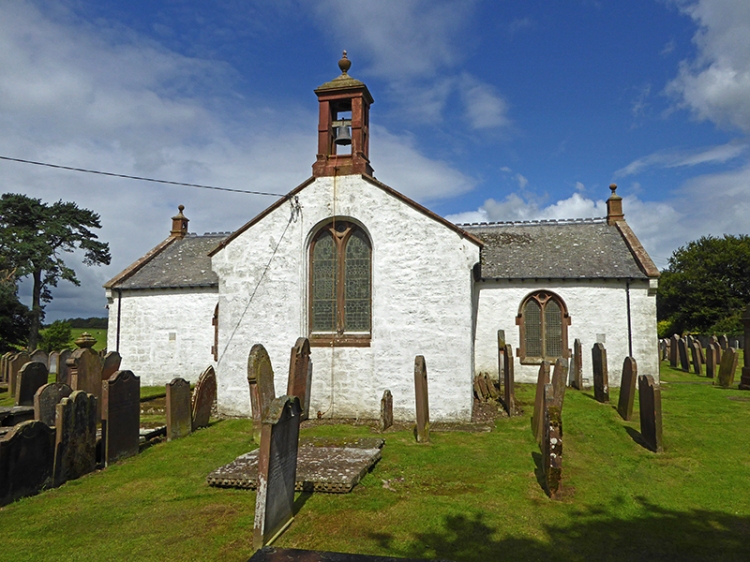 It has an eight century Anglo-Saxon cross inside but the doors were locked so I couldn’t look at it.  Instead, I took advantage of the steps laid into the kirkyard wall, a relic of the time when the minister was allowed to graze his sheep among the graves, and sat on one of the steps to eat my tuna roll. 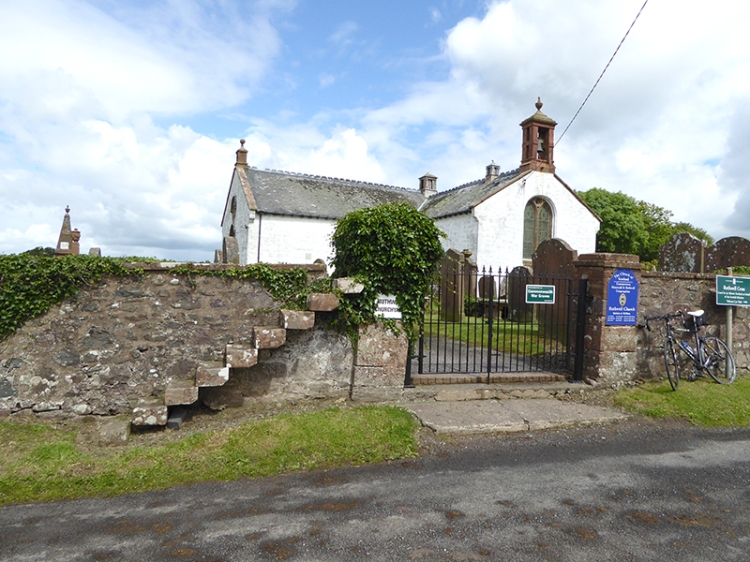 The was plenty of blue sky about but plenty of damp roads too and occasional drizzle.  I managed to avoid the heavy showers until one caught me out near Half Morton Church.  This church too has steps in the wall but it also had a very fine tree under which I sheltered while heavy rain lashed down. 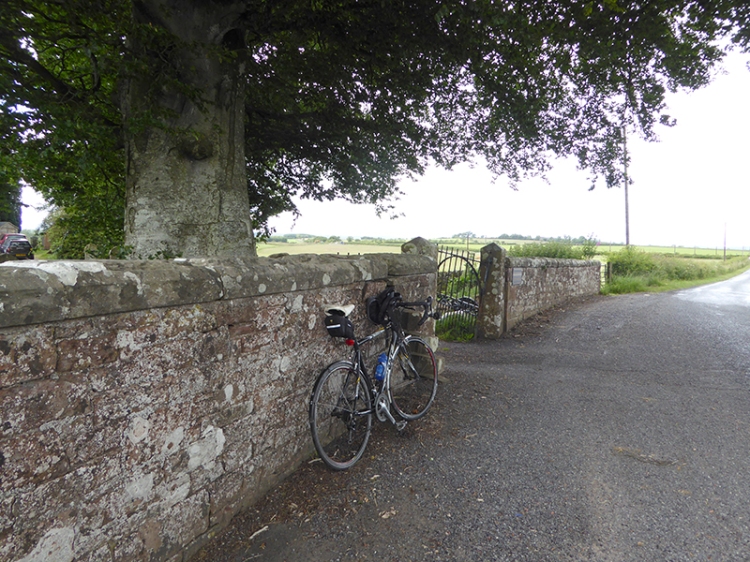 It was all the more annoying to see blue sky a few hundred yards away.  In the event, the rain didn’t last long so I put on my rain jacket to discourage any more showers and pedalled home.

I was a bit short of nourishment as my plan had been to pedal down to Gretna and sample the egg and chips at the Old Toll House there.  The sight of heavy showers on all sides persuaded me that the shortest route home might be the best so I missed the meal. 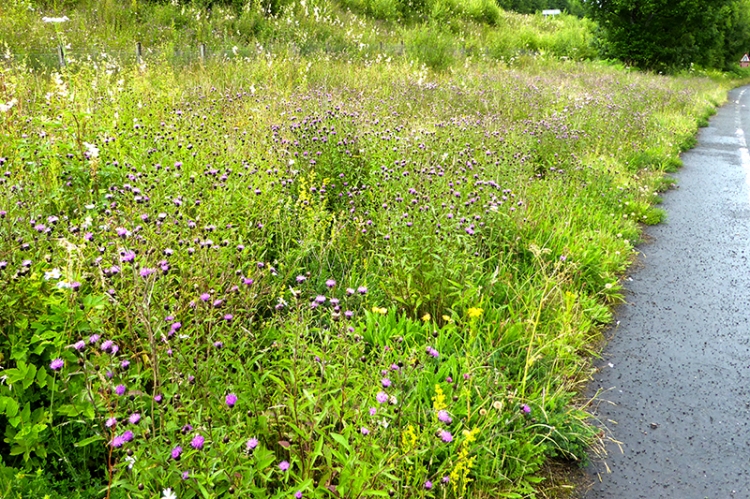 …both in colour and black and white…. 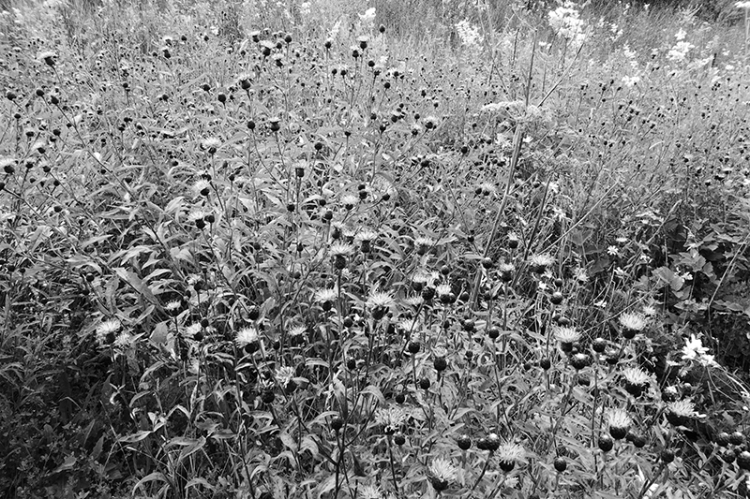 …I might have got home dry but as it was, I caught a sharp shower just as I came through Langholm.  Considering how many miles of damp road I had pedalled over on my way back, I had been very lucky though.

Full of sympathy at my lack of egg and chips at Gretna, Mrs Tootlepedal kindly cooked me some fried eggs and fried bread when I got in.    Fortified by these, I finished the crossword and settled down to watch another exciting stage of the Tour de France.

The sun came out as the race ended so I thought that it would be a pity not to go for a short walk and set off on my favourite brief tour of the Kiln Green and the Castleholm, ideal for a day when the weather might close in.

As I walked along the Esk, I could hardly hear myself think for the raucous shrieks of oyster catchers.  There were five of them all in full voice.  I assumed that they were a family.  Two were standing quietly, perhaps parents… 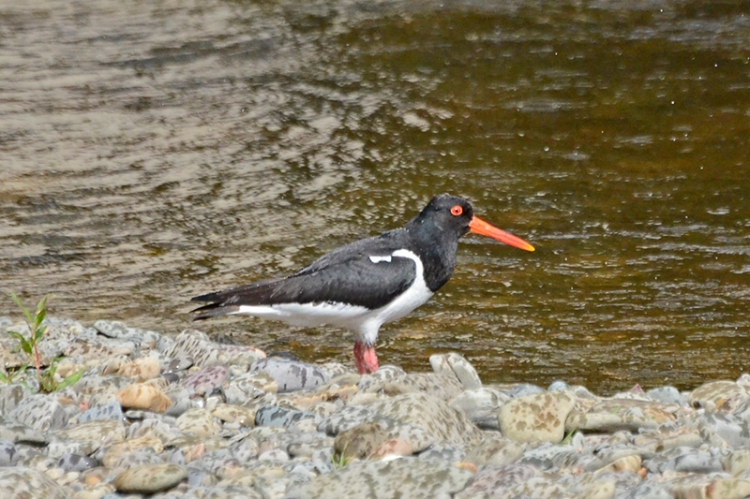 …and three were scooting up and down the beach, beaks agape and screeching like banshees. 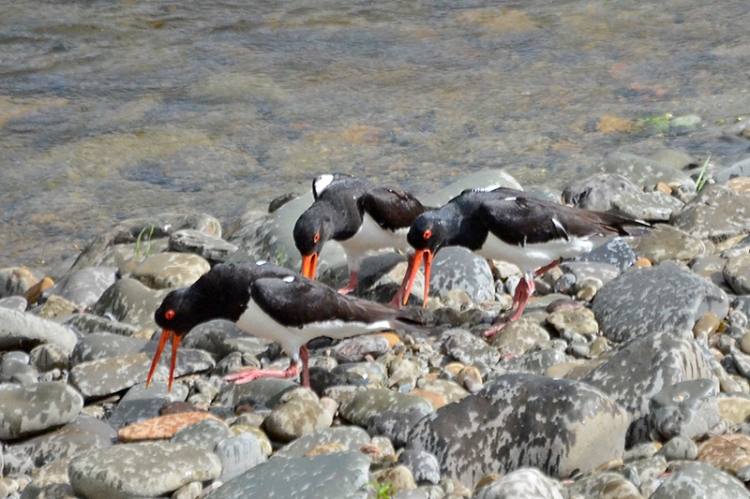 I thought at first that they were finding something to eat but it didn’t seem as though they were picking up anything with their beaks.  I don’t know what was going on.

Ignoring the racket, a pied wagtail skipped about the rocks. 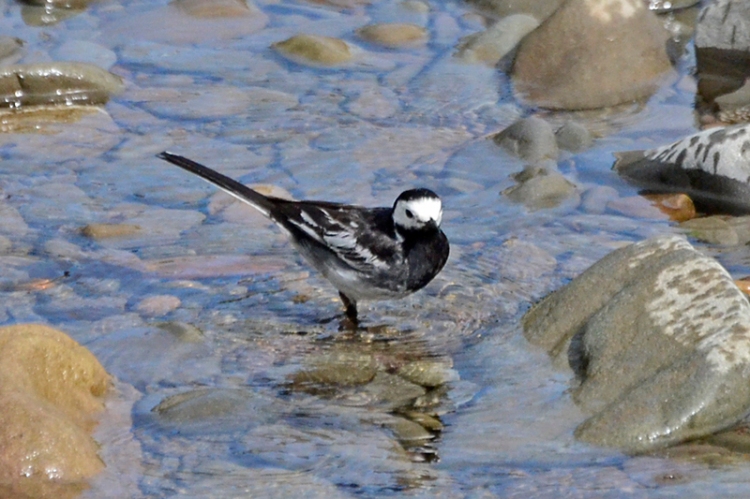 Although the sun was out as I crossed the town bridge, everything in the garden was not exactly promising… 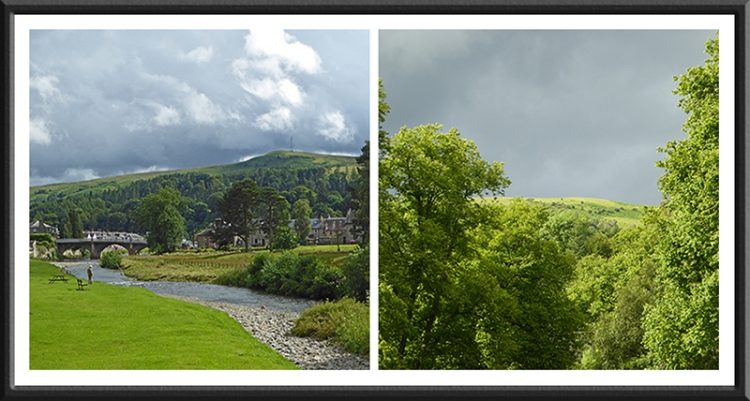 …and there were threatening clouds on all sides.

I increased my pace and only took a few pictures as I went.

The blade of grass of grass is not terribly exciting but I had plenty of time to look at it while I was sheltering beside it under a handy tree as another sharp shower passed over.

I met two occasional blog readers on my walk, one walking her dog and the other walking her sister.  The dog was very fine but the sister was even finer as she had appeared in a guest picture of the day last month, having cycled up to the top of Mount Ventoux.  It was a privilege to shake her hand.

She will have done better than the Tour de France cyclists as the wind is so strong that their stage tomorrow, which should have finished on the summit, has been curtailed.  She was not surprised though, as she told me that the wind had been so strong on her ride that she had feared that she might be blown off her bike.

I got home dry in the end, much to Mrs Tootlepedal’s disbelief as she had noticed a couple of showers while I was out and we walked round the garden.

I was just making a cup of tea when we were visited by Mike and Alison and their grandchildren.  The children are spending some time with their grandparents while their mother is off playing with her local wind band in Germany. They were delighted to spot a tadpole or two in our pond.

When they left, I picked enough strawberries and gooseberries to make a light supper and then went back in.

The flower of the day is a pink poppy.  It was a bit battered by the showers but at least it wasn’t another red one. 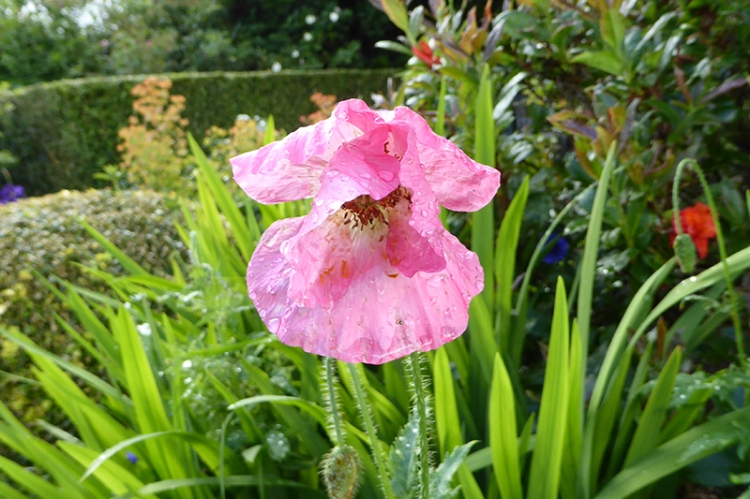 And the flying bird of the day is a distant gull at the Kilngreen, catching the sun against a grey and cloudy sky. 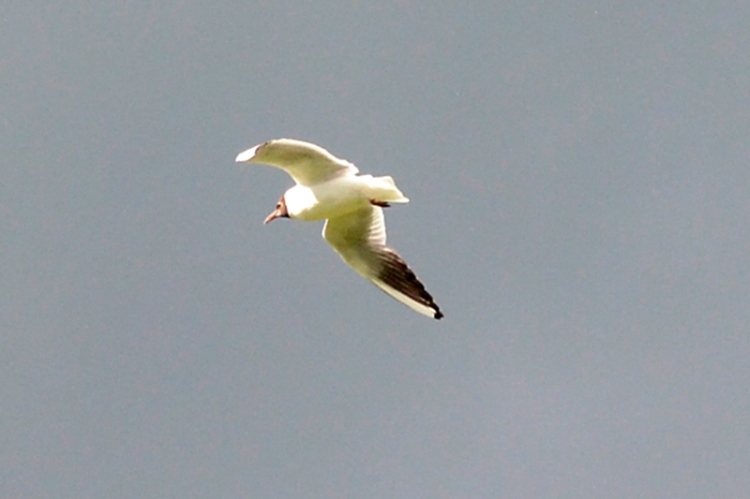 Details of the bike ride may be found by clicking on the map below.

I see on the news that Mrs May, our new UK prime minister, has made Boris Johnson foreign secretary (or minister of foreign affairs as my unkind younger son pointed out) and so once again political satire is dead as nothing could possibly be more absurd than this.